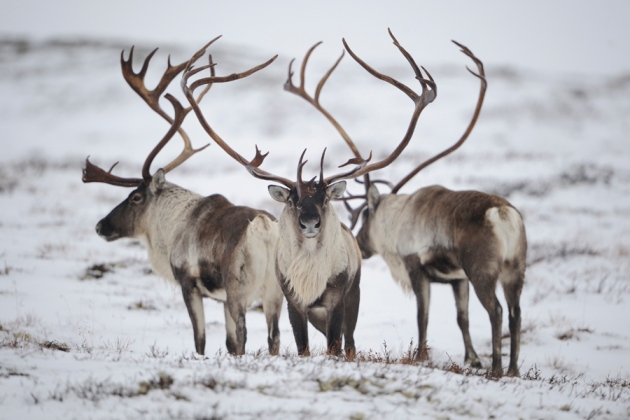 Reindeer have never before been found to have chronic wasting disease in the wild.

A highly contagious and deadly animal brain disorder has been detected in Europe for the first time. Scientists are now warning that the single case found in a wild reindeer might represent an unrecognized, widespread infection.

Chronic wasting disease (CWD) was thought to be restricted to deer, elk (Cervus canadensis) and moose (Alces alces) in North America and South Korea, but on 4 April researchers announced that the disease had been discovered in a free-ranging reindeer (Rangifer tarandus tarandus) in Norway. This is both the first time that CWD has been found in Europe and the first time that it has been found in this species in the wild anywhere in the world.

“It’s worrying — of course, especially for animals. It’s a nasty disease,” says Sylvie Benestad, an animal-disease researcher at the Norwegian Veterinary Institute in Oslo who, along with colleague Turid Vikøren, diagnosed the diseased reindeer.

A key question now is whether this is a rare — even unique — case, or if the disease is widespread but so far undetected in Europe.

“If it’s similar to our prion disease in the United States and Canada, the disease is subtle and it would be easy to miss,” says Christina Sigurdson, a pathologist at the University of California, San Diego, who has shown that reindeer can contract CWD in a laboratory environment1.

Like both bovine spongiform encephalopathy — also known as mad-cow disease — and variant Creutzfeldt-Jakob disease in humans, CWD occurs when cellular proteins called prions bend into an abnormal shape, inducing neighbouring, healthy proteins to do the same. The misfolded proteins aggregate in the brain and sometimes in other tissue, causing weight loss, coordination problems and behaviour changes. There is no cure or vaccine; as far as scientists know, CWD is always fatal.

Although the disease is not known to be transmissible to humans, it is highly contagious among deer, elk and related animals, which can shed infectious misfolded prion proteins in their saliva, urine and faeces. Animals infected with CWD have been found in more than 20 states in the United States and 2 provinces in Canada. The disease has also been detected in captive animals in South Korea, which imported CWD with a shipment of live elk brought into the country for farming in the late 1990s. 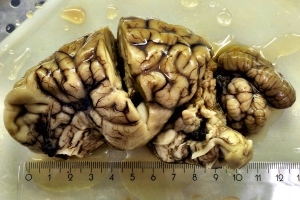 The brain of an ill reindeer from Norway was found to contain misfolded proteins called prions.

The infected reindeer ended up on Vikøren’s necropsy table thanks to scientists with the Norwegian Institute for Nature Research in Trondheim. They found it as they used a helicopter to track a free-ranging herd from the Nordfjella population in the alpine regions of southern Norway. Their goal was to capture adult female reindeer and collar them for satellite tracking — but when the researchers landed, they discovered a sick animal that could not move and soon died.

During the necropsy, Benestad tested for the abnormally folded proteins as a matter of routine. Eventually, a total of three different antibody-based tests all confirmed the presence of prions.

“I was very afraid,” Benestad says. During her long career as a prion researcher she has heard scientists from the United States and Canada discuss CWD, how contagious it is and how hard it is to stamp out.

It is a mystery how this disease arrived on a mountaintop in Norway. Benestad and Vikøren think it unlikely that it was it imported. They suspect that it might have arisen spontaneously, or jumped the species barrier from a prion disease in sheep called scrapie, although such a jump has never been seen before.

“The $64,000 question is what is the origin of this case of CWD in Europe,” says Glenn Telling, a prion-disease researcher at Colorado State University in Fort Collins. “What we do know is that once CWD is detected in new locations, it typically takes a foothold in that location, and is difficult to eradicate.”