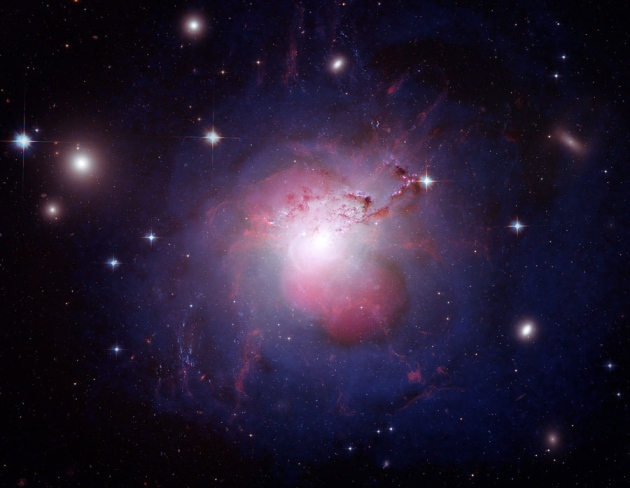 Perseus A (pictured) lies at the heart of the larger Perseus galaxy cluster.

From the last gasp of a failed satellite comes a brief glimpse of galaxies far, far away. Before it broke in March, one month after launch, Japan’s Hitomi X-ray satellite managed to gaze at the Perseus galaxy cluster — one of the Universe's most massive objects, 250 million light-years from Earth. And researchers discovered that superheated gas at the cluster's heart flows much more placidly than expected.

Understanding how turbulence roils this gas allows astronomers to explore how galaxies form and evolve. “Clusters are one of our most important probes of cosmology,” says Craig Sarazin, an astronomer at the University of Virginia in Charlottesville who was not involved with the work.

“Most of the gas in the Universe lies between galaxies,” adds Andrew Fabian, an astronomer at the University of Cambridge, UK, and a member of the international team that reported its findings on 6 July in Nature1. So Hitomi's peek into these areas could affect how scientists see most of the Universe's matter.

Hitomi launched on 17 February and made the Perseus observations on 25 February and 4 March, weeks before losing communication with Earth on 26 March. An investigation by the Japan Aerospace and Exploration Agency subsequently revealed that human errors in a software command caused the satellite to rotate so fast that it flew apart.

Researchers wouldn’t have had even this short glimpse of Perseus if they hadn’t targeted the cluster early on, as engineers were still calibrating the satellite.

Because galaxy clusters contain so much mass in the form of visible stars and unseen dark matter, they pull gas into a giant gravitational well. This process compresses and heats the gas to 50 million °C, causing it to glow intensely in X-ray wavelengths.

Earlier studies with the Chandra X-ray Observatory and the XMM-Newton satellite explored the pressure of gas between Perseus’s galaxies. Hitomi aimed to look instead at turbulence within the gas, because those motions can affect measurements of a cluster's mass and estimates of how galaxies come together.

Hitomi’s X-ray spectrometer revealed gas moving at 164 kilometres per second, measured near the centre of one of Perseus’s galaxies. That speed is much lower than expected given the amount of astrophysical action in the region, which includes a powerful black hole. 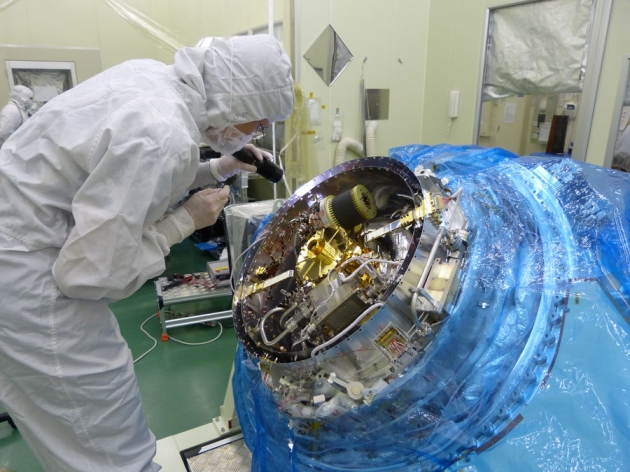 A scientist examines an x-ray spectrometer on Japan's Hitomi satellite before its launch in February.

Sound in the silence

Some other process — perhaps sound waves radiating outward — must be dissipating much of the cluster's energy, says Fabian. “It’s telling us there are aspects of clusters that we don’t fully understand,” he says.

The new Hitomi measurements aren’t quite as precise as they could have been, because the team had not gone through all its calibrations before losing the satellite, notes Elizabeth Blanton, an astronomer at Boston University in Massachusetts. But the Perseus work is likely to stand as Hitomi’s primary scientific legacy.

“Of course we had a programme planned to look at more clusters, and we would have carried on for the next few years had it only lived,” says Fabian. “It feels like the door has been briefly opened, showing us a new and exciting landscape — and it’s been slammed in our face again.”

The next big X-ray telescope is not scheduled until at least 2028, when the European Space Agency plans to launch its ATHENA observatory.