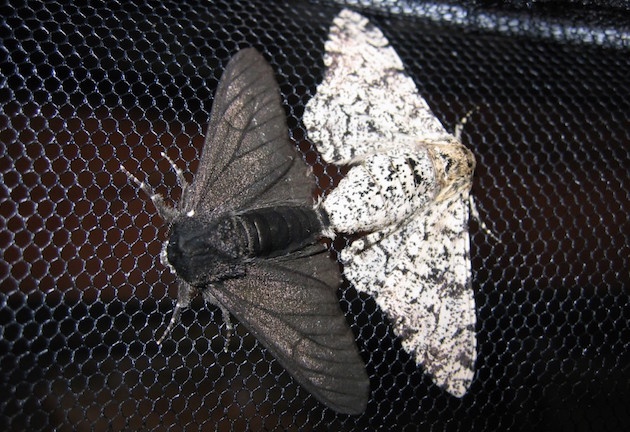 Scientists have identified the gene responsible for the darkening of the peppered moth that took place during the Industrial Revolution.

Not for nothing was the region of the English midlands north of Birmingham called the Black Country during the late nineteenth century. It was the dark polluted heart of the industrial revolution, according to a railway guide from 1851: “The pleasant green of pastures is almost unknown, the streams, in which no fishes swim, are black and unwholesome; the natural dead flat is often broken by high hills of cinders and spoil from the mines; the few trees are stunted and blasted; no birds are to be seen, except a few smoky sparrows; and for miles on miles a black waste spreads around, where furnaces continually smoke, steam engines thud and hiss, and long chains clank, while blind gin-horses walk their doleful round.”

A few kilometres to the north, where trees remained, the wildlife was already adapting to its new human-made environment. You have all seen the results. The first famous dark-coloured peppered moth — a staple of textbooks — was recorded in Manchester in 1848. Half a century later, they were everywhere. The wild-type, light-coloured and mottled, had disappeared almost to extinction.

There is perhaps no better example of natural selection in action than the case of the peppered moth (Biston betularia). As the same textbooks say, the colour of the moths evolved to match their new, sooty, backgrounds, and thereby camouflage the insects from hungry birds.

The story is not actually quite so clear-cut. Geneticists have squabbled over the details for decades — the strength of the evidence for the assumed choice of the birds, for example — and some of these technical criticisms have leaked, out of context, into the propaganda of creationists. In response, some textbooks have — heaven forbid — evolved to not include the peppered-moth story at all.

Among the holes in the story was the identity of the gene that was involved in producing the dark-coloured — melanic — moth variant.

Extensive mapping has pinned it down to a 400-kilobase region containing 13 genes, none of which had any obvious role in wing coloration. Undeterred, scientists went on to isolate the gene responsible, and they describe their search in this week’s issue. It is called cortex, orthologous to a gene of the same name in Drosophila. The researchers have even gone further, and shown that the specific cause of the mutation is the insertion of a transposable element (popularly, a ‘jumping gene’) into the first intron of the cortex gene.

The insertion leads to increased transcription of the gene during a phase of development when the wing discs are forming. The cortex gene, then, is involved in wing development, but there is still no obvious association with coloration. In Drosophila, cortex is involved in cell-cycle regulation, in particular, marking proteins that are redundant in the cell cycle as being ready for disposal. What is going on?

“There is enough in the pages that follow to update the textbooks.”

Work from a different group of Lepidoptera might offer a solution. In a study also in this issue, another group of researchers shows that cortex is a key player in the coloration of the wings of butterflies in the genus Heliconius, long a favourite for the study of mimicry. They show that cortex is a member of a fast-evolving scion of an otherwise conservative group of cell-cycle regulator genes known as the fizzy family, a name redolent of activity, growth and fervour, and possibly involved in the regulation of wing-scale development. This is important, because it is the size, density and surface properties of the wing scales that determine colour in butterflies and moths. Flies, such as Drosophila, lack these structures, perhaps explaining why it was initially hard to associate the cortex gene with wing development.

There is a further, satisfying twist to the tale. Although it is possible that melanic mutants existed undetected at a very low level in the peppered-moth population for centuries, the specific mutation behind their coloration is relatively recent, appearing around 1819 — in plenty of time for it to be noted down in Manchester a couple of decades later.

Much, of course, remains to be discovered, not least of which is the precise mode of action of cortex; how the gene relates to wing-scale development; and how the insertion of a transposable element contrives to alter this. But there is enough in the pages that follow to update those textbooks. Still, future generations of readers will find it harder to recognize the high hills of cinders and spoil from the mines that drove the change. The air is cleaner these days, ‘Black Country’ is no longer an apt description, and the dark-coloured peppered moths are vanishing as quickly as they emerged.