Since 1982, particle physicists have sojourned every so often in the fresh mountain air of Snowmass, Colorado, to dream up successive generations of particle accelerators.

Budgetary restrictions mean that this year’s Snowmass Community Summer Study — the first since 2001 — will be a bit less ambitious. The grass-roots planning exercise, which begins on 29 July, will last one week rather than three. And physicists will be trading the posh mountain resort for a humbler spot: Minneapolis, Minnesota.

The idea capturing physicists’ attention in the run-up to the meeting is correspondingly modest and thrifty: a low-energy but high-intensity accelerator called a cyclotron. The technology, first used more than 80 years ago, eventually ceded ground to the snazzier synchrotrons that today power facilities such as the Large Hadron Collider (LHC) at Europe’s particle-physics laboratory, CERN, near Geneva, Switzerland.

But, as physicists look for cheaper ways to test fundamental questions, cyclotrons could experience a renaissance.

“We need something totally out of the box,” says Janet Conrad, a particle physicist at the Massachusetts Institute of Technology in Cambridge, and co-spokesperson for the DAEδALUS collaboration, a proposal to generate beams of sub­atomic neutrinos using linked cyclotrons.

After the US Department of Energy (DOE) in 2011 closed the highest-energy US particle collider, the Tevatron, at Fermi National Accelerator Laboratory (Fermilab) in Batavia, Illinois, US particle physicists focused on creating particle beams that were high in intensity, rather than energy, so that they could generate large amounts of data per second. That way, even if Fermilab would no longer compete with the LHC in terms of energy, it could repurpose the Tevatron’s luminous proton beams and establish an ‘intensity frontier’. 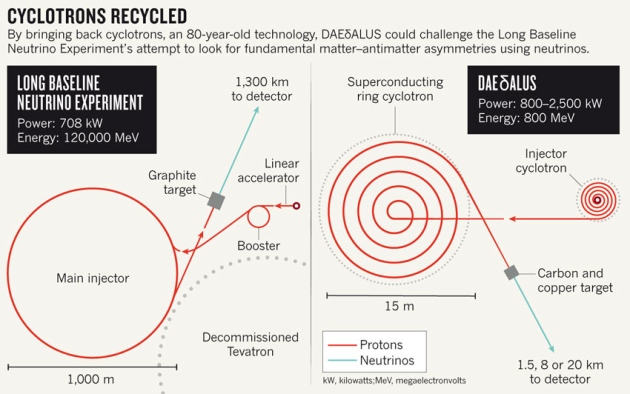 Fermilab quickly developed plans for a flagship intensity experiment, called the Long Baseline Neutrino Experiment (LBNE). It would send beams of neutrinos and antineutrinos along a 1,300-kilometre underground path to a detector in the Homestake mine near Lead, South Dakota. Neutrinos and antineutrinos are thought to behave the same in nearly every way, but the LBNE would look for crucial differences. It would monitor the way in which the three different types of neutrino morph, or oscillate, into one another as they travel along the beam, and then repeat the experiment, this time with a beam of antineutrinos. Any detected difference would indicate a fundamental asymmetry — helping to explain why the Universe contains so much more matter than antimatter.

In 2012, the DOE asked Fermilab to strip down these ambitious plans (see Nature 485, 16; 2012). Fermilab came back with a design that would cost about $800 million in its first phase. But many physicists are concerned that the scaled-back experiment will be less precise.

DAEδALUS is now emerging as a lower-cost alternative to test for matter–antimatter asymmetry. In this plan, near-stationary protons would be dumped in the centre of a small cyclotron and accelerated by magnetic fields in spirals until they reached the cyclotron’s outer edge. These souped-up protons would then be injected into a second, larger cyclotron, 15 metres across, which would accelerate them further still. The resulting proton beam would then be fired at a carbon and copper target to generate particles called pions, some of which decay into antineutrinos.

Costing about US$130 million for the cyclotron pair, the DAEδALUS scheme would be much cheaper and smaller than the LBNE (see ‘Cyclotrons recycled’). The cyclotrons could not match the proton energies of Fermilab’s proton accelerators, but, partly by operating at a higher power, they would generate a comparable number of antineutrinos per second, and so produce a similar amount of data. They would also generate a cleaner beam of antineutrinos than the LBNE could, because the energy levels at which DAEδALUS operates allow the copper in the target to neatly separate out the positively charged pions that in turn generate the desired antineutrinos.

Pairs of cyclotrons could be set up at three different distances, or baselines, around the same detector, which would measure how many antineutrinos from each beam morph into a different type during flight. By operating simultaneously with three baselines, DAEδALUS could map the shape, or waveform, of the antineutrino oscillations. If there is asymmetry between matter and antimatter, the shape of these oscillations would take on a characteristic pattern — and there would be no need for the experiment to run separately with a beam of neutrinos.

The two experiments would both need large liquid detectors, but Conrad notes that Japan is already planning to build a water-based detector for astrophysical neutrinos that could work with DAEδALUS. The DAEδALUS accelerators are cheap and small enough that they could be reproduced and built up around pre-existing detectors, rather than the other way around. “The beauty of DAEδALUS is that you can forget about accelerators being stuck at laboratories,” says Conrad.

Other physicists are impressed. “It’s an imaginative proposal for how to address neutrino oscillations,” says Jonathan Rosner, a particle physicist at the University of Chicago in Illinois who oversees the Snowmass Study as chair of the American Physical Society’s Division of Particles and Fields.

LBNE co-spokesperson Milind Diwan of Brookhaven National Laboratory in Upton, New York, also says that the idea is technically interesting. But he says it is not yet proven or accepted, and that the United States needs to commit to a strong domestic programme based around the DOE-approved LBNE in order to draw international funding.

If DAEδALUS features prominently in the Snowmass final report, expected in November, it could find a spot in the agenda set by the Particle Physics Project Prioritization Panel (P5), a group of DOE advisers who will convene shortly after receiving the Snowmass report and begin ranking projects. P5 is likely to recommend some US involvement in high-energy machines, both the LHC and a next-generation machine that Japan hopes to host, the International Linear Collider. The panel could also renew an emphasis, set in its 2008 report, on the intensity frontier, which led to the flagship LBNE proposal.

But some US physicists say that shrinking US budgets mean that projects may end up competing more on scientific merit and cost, rather than what they do for the status of any nation’s programme. “We have to tighten our belts,” says Rosner. “It’s not just business as usual.”