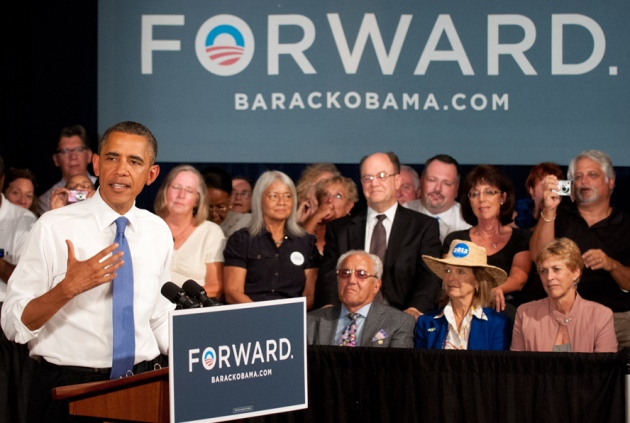 A House bill passed last week would give the Obama administration 30 days to work out how to apply a massive cut to federal programmes including research.

In an ordinary year, a flat budget for the US National Institutes of Health (NIH) would be considered dire news. This year, it is far from the worst possible outcome. Hanging over the effective decrease in support proposed by the House of Representatives last week is the ‘sequester’, a pre-programmed budget cut that research advocates say would starve US science-funding agencies.

A sharply divided Congress is showing few signs that it can defuse the situation before the self-imposed fiscal time bomb explodes, in less than six months’ time. And even if Congress does manage to introduce last-minute legislation, as many observers expect, the sequester will have cast a shadow over the contentious process of funding science in a time of fiscal constraints — and in an election year.

The sweeping cut, scheduled to take effect on 2 January, is a by-product of last year’s Budget Control Act, which requires law-makers to find ways to reduce the federal deficit (see Nature 476, 133-134; 2011). When a congressional committee failed in its remit to do just that last November, the clock began ticking towards an automatic cut that will claw the required amount from across the federal government, including all military and non-military spending that is not required by law. The precise amount to be cut depends on several variables, including tax revenue, but an estimate by the Congressional Budget Office puts it at 7.8% in 2013 for the non-military component.

“Nobody wants to see the sequester, because it’s a terrible budgetary tool,” says Mike Lubell, director of public affairs for the American Physical Society in Washington DC. “You don’t just take a meat axe and chop off one finger from every pair of hands.”

Although no one doubts that the sequester would have a major impact on US science funding (see ‘Winners to losers’), no agencies have announced what they will do if it happens. This is mainly because of ambiguity in how the sequester is supposed to be applied: the cuts are described as across-the-board, but how much latitude agencies will have to manage reductions at the programme level remains unclear.

Grants to extramural investigators are likely to be hit particularly hard, because they can generally be scaled down more quickly than internal costs such as salaries or long-term programme commitments. “You can’t cut everything right away,” says Jennifer Zeitzer, director of legislative relations for the Federation of American Societies for Experimental Biology in Bethesda, Maryland.

On 18 July, the Republican-led House passed ‘transparency’ legislation that would force President Barack Obama’s administration to specify how the cut would be applied. If the Senate were to pass a parallel bill, the administration would be forced to provide the details within 30 days.

“Hopefully, with the transparency bill we’ll get some answers on how to allocate those cuts,” says Matt Hourihan, director of the research and development budget and policy programme at the American Association for the Advancement of Science in Washington DC.

Research advocates are particularly concerned that the sequester might be adjusted to prevent cuts to defence. If that happened, non-military programmes would be forced to bear more than twice the currently mooted cut. Such an extreme measure would threaten entire facilities and sideline thousands of research grants. “A lot of programmes wouldn’t survive. They’d be vaporized,” says Lubell.

With the sequester lurking in the background, the latest move in the annual budget chess match came on 17 July, when the House subcommittee that oversees the budgets for the NIH and the Centers for Disease Control and Prevention in Atlanta, Georgia, released its version of a spending bill for fiscal year 2013 (see ‘State of play’). For the NIH, which has a US$30-billion annual budget and is the biggest non-military research funder in the United States, the House bill offers little comfort. Overall, the legislation keeps the agency’s funding at the same level as in 2012 — a net decrease once inflation is taken into account. This matches Obama’s 2013 budget request to Congress in February (see Nature 482, 283–285; 2012), but contrasts with the Senate version of the spending bill, which boosts the agency’s funding by about $100 million.

With a trillion-dollar federal deficit at the forefront of legislators’ minds, a clamp on spending is not as surprising as the unusually hands-on way in which the NIH portion of the House bill is written. The bill specifically requires NIH director Francis Collins to spend 90% of the agency’s budget on extra­mural activities, 10% on intramural activities and at least 55% on basic science, and instructs the agency to maintain at least 16,670 training research awards (a category intended for doctoral students and postdoctoral fellows). That is roughly how many awards the agency currently makes, but fixing the number in the bill reduces the NIH’s flexibility. The bill also prohibits the NIH from funding research that compares the relative effects of treatments on patients, part of a broader move by the House to thwart Obama’s health-care reforms. Finally, the bill restricts travel by Collins and his staff until the NIH implements a pilot study on the medical-insurance coverage of patients in clinical trials that was requested by Congress last year.

Spending bills introduced in the House and Senate from April offer a brighter year for some other agencies: the rises proposed for the US National Science Foundation and the US National Institute of Standards and Technology at least approach those called for in the president’s request (see ‘State of play’). But the Department of Energy’s Office of Science faces a stiff cut in the House bill as do the Food and Drug Administration and the Environmental Protection Agency, owing to political differences between House Republicans and the Obama administration. The reverse is true for the NASA science budget, with the House aiming to resist an administration cut that would jeopardize a sample-return mission to Mars.

In theory, the 2013 budget must be enacted by 30 September, the end of the 2012 fiscal year. That would require the House and Senate to agree on a bill and Obama to sign it. In practice, however, Congress is not expected to settle the budget until after the general election on 6 November. But the outcome will be just the tip of the fiscal iceberg if Congress cannot avert the sequester.

“Conventional wisdom at this point is that the sequester won’t happen,” says David Moore, senior director of government relations at the American Association of Medical Colleges in Washington DC. “But when you press legislators on what’s going to happen to avert this, there’s no consensus.”