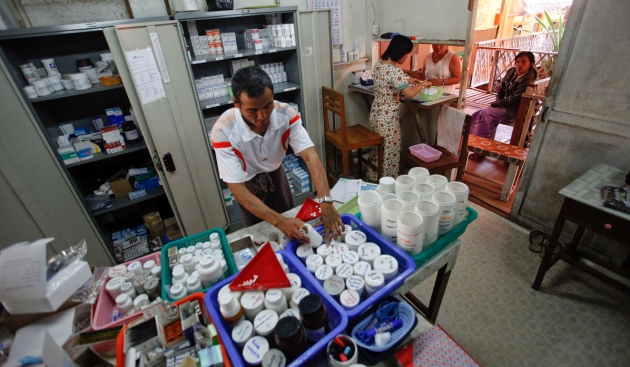 Plans to provide drugs for people with HIV in Myanmar are being scaled back through lack of funds.

Preventing the spread of HIV used to mean testing people for infection and encouraging them to practise safe sex. Increasingly, it also means prescribing drugs, as studies show that giving infected people or their uninfected partners antiretroviral drugs as soon as an infection is diagnosed can help to check the spread of AIDS.

Yet at this week’s annual Conference on Retro­viruses and Opportunistic Infections in Seattle, Washington, there was growing concern that financial austerity in the United States and elsewhere is eating away at the funding needed for a worldwide prevention effort.

Many scientists and advocates agree that there is now an “awesome possibility to prevent the spread of HIV”, says Sharonann Lynch, HIV policy adviser for Médecins Sans Frontières (MSF, also known as Doctors Without Borders) in New York. “If we decrease the money invested in treatment now, we are squandering the best opportunity we’re going to have to get ahead of the wave of new infections.”

Last month, US President Barack Obama’s 2013 budget request proposed a 10.8% cut to direct international aid for HIV programmes under the President’s Emergency Plan for AIDS Relief (PEPFAR) which, together with previous cuts, would slice more than US$1 billion from the fund’s 2010 level (see ‘Sliding support’). And last November, the Global Fund to Fight AIDS, Tuberculosis and Malaria said that it would not hand out any more funds for scaling up AIDS treatments until 2014 because of tightening budgets in donor countries (see Nature 480,159–160; 2011).

The shortfalls come as a slew of results presented this week reinforce a growing consensus about the power of early treatment for HIV infections. The latest data are part of a trend that accelerated last May, when HPTN 052, a clinical trial run by the multinational HIV Prevention Trials Network, showed that giving antiretroviral drugs to people who are HIV-positive can stop them from passing the virus to their uninfected partners (M. S. Cohen et al. N. Engl. J. Med. 365, 493-505; 2011). In light of such results, the World Health Organization is expected to issue new guidelines for managing HIV in couples soon.

Other work discussed this week addressed some of the lingering questions over pre-exposure prophylaxis (PrEP), a strategy in which uninfected people take antiretroviral drugs to decrease their risk of contracting HIV. Epidemiologist Jared Baeten and biostatistician Deborah Donnell at the University of Washington in Seattle presented final data from the Partners PrEP study, one of three studies in the past 18 months to find that PrEP cut infection rates. The data support the study’s initial findings and show that infection risk can be reduced by as much as 90% if the treatment is taken as prescribed. 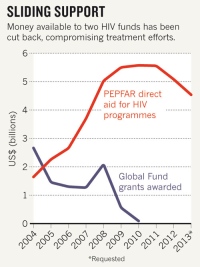 That finding could account for a contrary result from FEM-PrEP, one of two studies that last year suggested PrEP is not effective for women. At the meeting, a principal investigator of FEM-PrEP, Lut Van Damme of the non-profit organization FHI 360 in Durham, North Carolina, reported that fewer than 40% of women in the study took their medication as intended.

But many developing countries that depend on international aid to fight the AIDS epidemic may not be able to take advantage of these results. Funding cuts are already eroding existing treatment programmes, making any expansion unlikely.

In Myanmar, for instance, MSF has reported that fewer than 30,000 of the 120,000 people who need antiretroviral drugs are getting them. The country had hoped to treat 46,500 more with money from the Global Fund, but abandoned that plan when the funding round was cancelled.

The Democratic Republic of Congo, which gives antiretrovirals to around 50,000 people with HIV — just 15% of those in the country who need them — is planning to lower its 2014 treatment targets from 82,000 to 54,000. It has also directed some non-governmental organizations to stop testing people for HIV, MSF says, because it cannot afford to treat people with the virus.

“Ultimately we’re going to have to wait for the Global Fund and PEPFAR to increase their resources if we are to truly impact this epidemic,” says Salim Abdool Karim, director of the Centre for the AIDS Programme of Research in South Africa, based in Durban. “We’re not going to be able to do it with the resources currently being made available.”

PEPFAR’s 2013 budget won’t be decided for many months. But Lynch and MSF are pushing the Global Fund to hold an emergency meeting, perhaps at June’s G20 summit in Los Cabos, Mexico, to drum up new money so that it can issue grants for HIV projects before 2014. The fund’s general manager, Gabriel Jaramillo, supports the idea.

Researchers, meanwhile, are finding ways to make do with less. Craig Cohen, an obstetrician and gynaecologist at the University of California, San Francisco, runs a programme that treats more than 114,000 people with HIV at 116 clinics across Kenya. Through money-saving measures such as reducing checks on patients who are stable on their medication, Cohen says that he has extended the programme’s reach, even as his funding from PEPFAR has declined. But, he adds, “you can only push so far to become more efficient”.