The zebrafish is a major player in the study of vertebrate biology and human disease. Its transparent, externally fertilized eggs, short reproductive cycle and fast growth mean that its embryonic development can be studied closely while the animal is alive, and the fish is a useful model for studying gene behaviour and function.

Now, researchers led by Stephen Ekker, a molecular biologist at the Mayo Clinic in Rochester, Minnesota, have for the first time made custom changes to parts of the zebrafish (Danio rerio) genome, using artificial enzymes to cut portions of DNA out of targeted positions in a gene sequence, and replace them with synthetic DNA. The work is published today in Nature1. 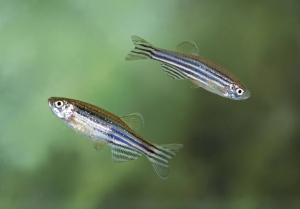 Zebrafish are common model organisms in genetic research. Now their genomes can be custom edited.

Researchers have previously edited targeted portions of the genomes of living animals using enzymes known as zinc finger nucleases (ZFNs)2, or gene-regulation molecules called morpholinos3. Zebrafish DNA has been adapted by deliberate mutation at targeted locations using ZFNs4 or enzymes called transcription activator-like effector nucleases (TALENs)5, and by manipulation of gene behaviour using morpholinos6. TALENs have also been used for targeted genome editing in cell cultures7, but Ekker and his colleagues are the first to use artificial TALENs for genome editing in live zebrafish larvae.

TALENs have several advantages over ZFNs and morpholinos: they are cheaper, more efficient — especially when used in a developed, active form — and while ZFNs can only target specific sequences, TALENs have the potential to work on any DNA sequence. And whereas the effects of morpholinos are temporary, TALENs cause permanent modifications. They also allow faster analysis of induced mutations — in some cases, the team found, it is possible to observe effects in the injected larvae immediately.

One of the sequences that Ekker and his colleagues inserted into the zebrafish DNA was one that allows genes to be switched on and off. This could enable researchers to examine the effects of a gene both during early development, by turning the mutation on immediately, or later in life, by turning it on when the fish reaches maturity. It is not usually possible to examine the effects of gene alteration in later life, because fish with deliberately mutated genes that affect development often do not survive into adulthood.

The work "opens up the possibility to do many great experiments using zebrafish", says Jason Rihel, a developmental biologist who works with zebrafish at University College London. “The ability to directly rewrite native genetic sequences would give us the precise control of genes needed to refine zebrafish models of complex diseases.” Such models could be used to probe “the behavioural functions of specific brain neurons, or to tease apart the network of signals that orchestrate vertebrate development”, he adds.

Ekker says that there will be uses for the TALENs technique in other organisms. “Although we focused on zebrafish, there are notable implications for using this same approach in other model systems, including rats, mice, flies and worms,” he says. Research using species such as mice currently relies on in vitro modification of stem cells, which are then cultivated into a full mutant adult — a method that could not be used to treat diseases in humans.

By contrast, Rihel sees potential for the TALEN technique in humans: “To pull just one pie-in-the-sky idea off the top of my head — we could potentially use targeted DNA editing in the retina to repair a human blindness gene, for example.”