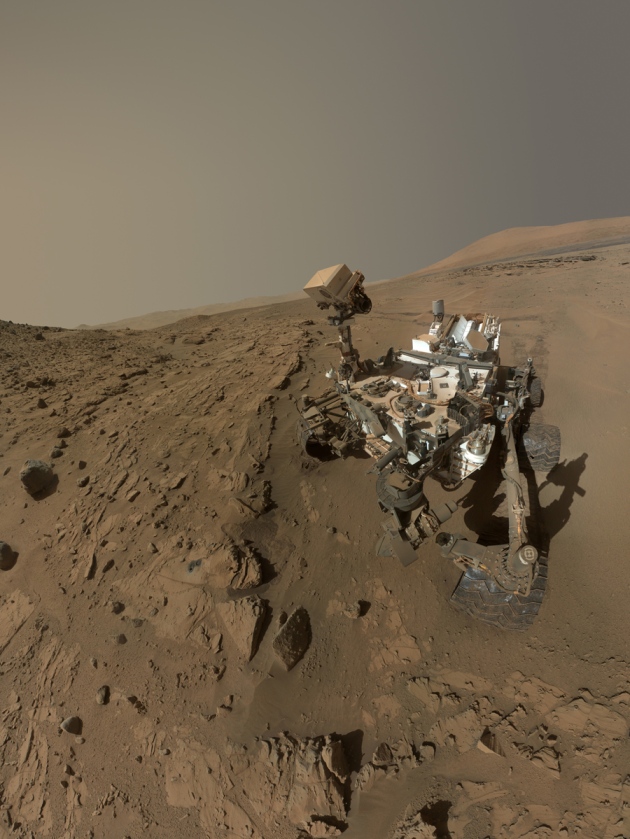 The Curiosity rover is sampling gas on Mars.

NASA’s Mars Curiosity rover has found a small amount of methane wafting over its landing spot in Gale Crater. The levels of the gas occasionally rise tenfold before dissipating again.

The discovery is a significant contribution to the long-running debate over how much of this important gas Mars has.

“Mars is active, both producing and releasing methane,” says Sushil Atreya, a planetary scientist at the University of Michigan in Ann Arbor and co-author of a paper on the findings that is published in Science1. The Curiosity team announced the findings on 16 December in San Francisco, California, at a meeting of the American Geophysical Union.

So far, the scientists do not know where the methane is coming from. “There’s nothing else that correlates with it yet, so it’s hard to tell,” says Michael Meyer, lead scientist for the Mars exploration programme at NASA headquarters in Washington DC.

The methane could be arriving from outer space, delivered by comets smashing into the planet. It might come from active geological processes, such as chemical reactions between different types of rock. Or, most excitingly, it could come from bacteria. On Earth, most atmospheric methane gets its start inside living organisms.

The study of Martian methane is riddled with tantalizing leads and controversial dead-ends. Scientists with the European Space Agency’s Mars Express spacecraft have reported finding methane at roughly 15 parts per billion of the atmosphere all over the planet, rising to about 45 parts per billion over the north pole during local summer2. Other observations have suggested much lower levels, or concentrated plumes that appear and then vanish. Atmospheric modellers have been hard-pressed to explain all the patterns of methane that have been reported across the Martian surface.

Curiosity, which landed in 2012, carries instruments including a high-resolution spectrometer that is well suited to sniffing out methane. Over the course of 605 Martian days, it measured background methane levels at 0.7 parts per billion — significantly lower than earlier claims. Curiosity also performed two methane-enrichment experiments in which it circulated atmospheric gas through a scrubber to remove carbon dioxide and increase the level of methane more than 20-fold. Such a test can improve measurements of a gas that is almost too scarce to spot otherwise.

Occasionally, and separate from the methane-enrichment experiments, the rover measured atmospheric levels of methane as high as roughly 7 parts per billion. Whatever is causing those increases must be located relatively close to Curiosity, perhaps tens to hundreds of kilometres away, says Atreya. The methane spikes could come from something actively producing methane on Mars today, or from the release of ancient methane stored in sediments such as clathrates — cage-like mineral structures that can trap small molecules.

India’s ongoing Mars Orbiter Mission has been mapping methane, although no results have been released; Europe’s upcoming ExoMars Trace Gas Orbiter, which is slated for a 2016 launch, will also track the gas. “Methane maps will be the future,” says Atreya. But neither has the precision of Curiosity.

Meanwhile, a second Curiosity paper in Science3 sheds some light on the planet’s ancient evolution. The rover has measured the ratio of a heavy isotope of hydrogen to normal hydrogen in 3-billion-year-old rocks from near where Curiosity landed.

The results help to nail down exactly how much water has been flying away from Mars over time, drying out its atmosphere and leaving its surface bare. Since the rocks formed, 3 billion years ago, Mars has lost 1 to 1.5 times the amount of water it contains today, frozen at its poles and locked in minerals beneath the surface.

Separately, Curiosity scientists also reported finding organic molecules on the surface of Mars. The rover has spotted simple organics before, but the new results include more complex molecules that have two or more carbon atoms per molecule rather than just one, says Caroline Freissinet, a planetary scientist at NASA’s Goddard Space Flight Center in Greenbelt, Maryland, who led the analysis. The signal of organics appeared in just one location out of four studied — drastically lessening the chances that the signal is due to contamination from Earth, she says.

Organic molecules could be made on Mars through many processes, including being delivered to the surface by meteorites. The Curiosity results do not necessarily say anything about life on Mars. “But even abiotic organics are the kinds of things we need to look for if we are ever going to find evidence that microbes once existed on Mars,” says John Grotzinger, a planetary scientist at the California Institute of Technology in Pasadena and the rover’s chief scientist. “This is really exciting news for us.”

Added information about Curiosity detecting organic molecules on the surface of Mars.