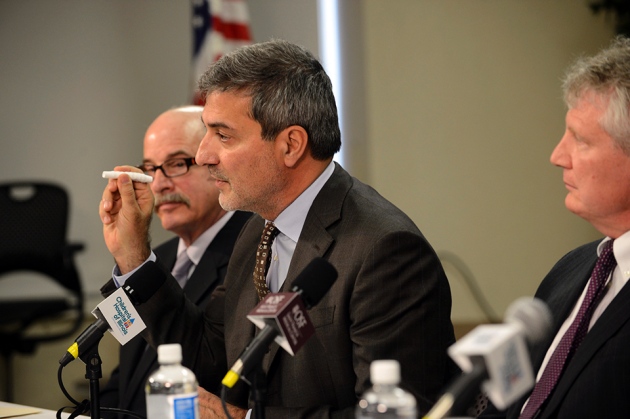 Paolo Macchiarini with a synthetic trachea in 2013.

A "star surgeon" who implanted the world's first artificial trachea — but has since been dismissed following allegations of scientific and clinical misconduct — worked in an environment that provided a “culture of silence”, a lack of respect for rules and “group thinking”.

That is the conclusion of an external inquiry commissioned in February by the Karolinska University Hospital in Stockholm into the three artificial-trachea operations that the surgeon, Paolo Macchiarini, carried out at the hospital between 2011 and 2013.

The report, led by Kjell Asplund, chairperson of the Swedish National Council on Medical Ethics and released on 31 August, also says that the Karolinska Institute (KI), with which Macchiarini was jointly affiliated, applied unusual pressure on the hospital to hire him and to defend him against criticism — but also that the hospital was too willing to toe the KI line.

Hospital director Melvin Samsom formally apologized to the three trachea recipients and their families — two of the patients have since died, and the third has required continuous hospital care since the transplant. “What has happened is both unacceptable and exceptional,” Samsom said during a press conference on 31 August.

The hospital stopped further transplants in 2013 but Macchiarini went on to carry out five more artificial-trachea transplants at other locations. In June, public prosecutors opened investigations following preliminary charges against Macchiarini of involuntary manslaughter and causing grievous bodily harm.

The report on the hospital was followed on 5 September by the results of a second independent inquiry commissioned by the KI — also in February. That inquiry examined the procedures the KI used to appoint Macchiarini and extend his contracts, and how the KI handled allegations of scientific misconduct against the surgeon.

The KI had a “nonchalant attitude towards regulations”, says the 5 September report, citing poor management and administrative procedures, including for handling scientific misconduct allegations. It also says that Macchiarini’s initial appointment in 2010 “was pushed through inappropriately”, with the vice-chancellor at the time interfering directly, and that negative references for Macchiarini were not passed on to the recruitment committee.

“It is striking how Asplund’s independent inquiry into procedures at the university hospital drew many of the same conclusions, even though we had not compared notes,” says Sten Heckscher, a former president of Sweden’s Supreme Administrative Court, who led the KI inquiry.

Acting vice-chancellor of the KI, Karin Dahlman-Wright, said in a statement on the KI inquiry results: “Macchiarini himself must bear considerable responsibility in all this, but it is also very clear that KI has failed in its monitoring of compliance with rules and procedures.”

She added: "It is now up to us to show that KI is so much more than just the Macchiarini case.” Already the KI has responded by tightening up its procedures for recruitment and handling allegations of scientific misconduct, she said.

On 5 September, Macchiarini said in a statement to Swedish broadcaster SVT that he is not guilty of research mismanagement, and has always done his best for his patients.

Allegations of misconduct against Macchiarini emerged in 2014, including that he had exaggerated the success of his artificial-trachea implants in several scientific papers. In August 2015, the KI cleared him of scientific misconduct.

But a Swedish television documentary about Macchiarini’s work, aired in January, re-opened the issue. The KI subsequently dismissed Macchiarini, and both the KI and the university hospital commissioned independent investigations, with the KI focusing on its management of Macchiarini’s academic work and the hospital on his clinical activities.

Under Macchiarini's procedure, the artificial windpipes were coated with bone-marrow stem cells extracted from the patients, who were later treated with growth factors to stimulate the cells to grow and cover the synthetic structure.

The 31 August report led by Asplund points to problems with how Macchiarini managed the operations. These include mislabelling the procedures as medical care rather than clinical research, which resulted in failure to submit the procedure to an ethical review board and failure to obtain a permit from the Swedish Medical Products Agency to use the growth-promoting drugs, which have not yet been approved for the clinic.

The patients were not appropriately informed before consenting to the operation, whose exact procedures had never been carried out in a whole animal, the report says. Moreover, Macchiarini was not always available to deal with complications in his patients when they arose.

The Asplund report also examines the institutes themselves. It finds that the hospital management did no risk assessment before the experimental procedure and did not ensure systematic follow-up.

And it says that the highly competitive environment of the university hospital may have contributed to the course of events. The initial view of Macchiarini as having star status created a culture of acceptance, the report suggests, with colleagues preferring to keep criticisms to themselves rather than risk their own positions. Colleagues who dared to speak up were discredited instead of listened to.

The report finds that Macchiarini’s recruitment to the hospital was mostly driven by the KI’s enthusiasm for his apparently innovative translational research. The hospital, the report states, called in references, some of which indicated certain shortcomings in Macchiarini’s medical judgement, at a late stage in the recruitment process. The report's authors infer that the hospital did not act on these warning signs because of pressure from the KI. The KI also tried to pressure the hospital to extend its own contract with Macchiarini beyond November 2013, the report says, but in this case, the hospital held out.

The affair has damaged trust in clinical research in Sweden, says the report, but the hospital is already taking steps to improve things. For example, it has prepared internal guidelines for experimental clinical methods and for how to deal with whistle-blowers.

Acting KI vice-chancellor Karin Dahlman-Wright said in a statement on 31 August that “it would be extremely regrettable if the Karolinska Institutet had exerted any kind of pressure” in hiring Macchiarini.

Further criticism of the KI comes from the 5 September report. As well as noting a lack of regard for rules at the KI, it points out that the KI extended Macchiarini’s contracts in 2013 and 2015 — even after the hospital had terminated its contract with the surgeon. And in 2015, the KI’s audit office investigated whether Macchiarini’s activities outside Stockholm posed any potential financial conflicts of interest. “We find it strange that the audit of his extra-occupational activities did not address the matter of ethics or thepotential damage to KI’s reputation,” says the report.

It also says that the KI serially mishandled allegations of scientific misconduct. For example, when the institute cleared Macchiarini in 2015, this ran counter to an independent report a few months earlier, which found that he had committed misconduct.

The KI also holds some responsibility for the controversial transplants carried out at the Karolinska University Hospital, says the 5 September report. Staff were sometimes involved in discussions preceding and following surgery, and the KI claimed the success of the transplants in its evaluations of how it used its own research funding.

KI cancer immunologist Hans Wigzell, who was vice-chancellor of the institute from 1995 until 2003, says the affair has left many KI professors nervous that their institute’s damaged reputation will have knock-on effects for funding — and that a temptation to tighten procedures will lead to a damaging bureaucracy. “The systems at the KI are fine,” he says. “The problems arose because decision-makers failed to follow the system’s rules, and then they bunkered down.”

Macchiarini and his lawyer declined to comment to Nature on either of the reports.

This story has been updated since it was first posted to reflect details from a second independent report released on 5 September.

This story has been updated since it was first posted to include Paolo Macchiarini’s comment to the Swedish broadcaster SVT.