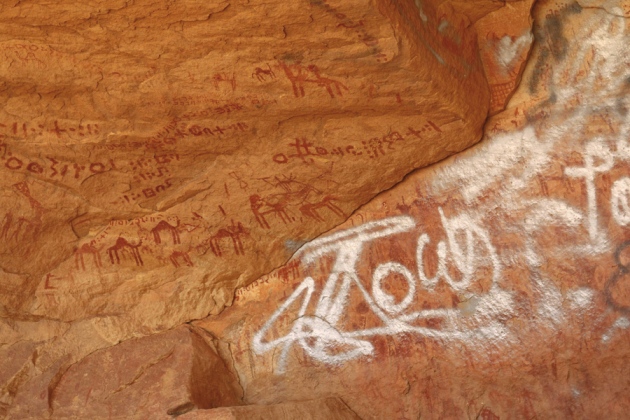 Rock art thought to be about 4,000 years old in Libya's Tadrart Acacus mountains was vandalized in 2009.

Libya is a hotspot for research into the human past. The Sahara, the largest hot desert in the world, was once green and hosted until a few thousand years ago the biggest freshwater lake on Earth1. Some depictions of crocodiles and cattle engraved and painted on the walls of rock shelters in the Sahara date back 9,000 years.

The desert is also a laboratory for investigating links between past climate changes and developments in human history2, 3. These include the dispersal of modern humans across Africa about 130,000 years ago4, the oldest evidence5 of milking in Africa around 5200 bc and the establishment of the first Saharan state6 during the first millennium bc.

Archaeological fieldwork in Libya is at a standstill. Four years after the Arab Spring and the February 2011 Libyan revolution that ended the regime of Muammar Gaddafi, violence remains rife. Recent escalations in fighting have injured and killed people and damaged the nation's cultural heritage, infrastructure and free press. Libyan monuments have been seriously damaged, including the Karamanli mosque, built in 1738 in the capital, Tripoli, and Islamic tombs that date to between the tenth and twelfth centuries at Zuwila, near the west-central town of Murzuq. This, along with concerns about the illicit trafficking of cultural materials, led Irina Bokova, the director-general of the United Nations Educational, Scientific and Cultural Organization (UNESCO), to call for greater protection of Libyan cultural heritage in November last year.

The destruction of archaeological sites in Syria, Iraq and Afghanistan — to name but a few other war-torn countries — are part of the same picture: what does not comply with militant revolutionaries' aims is expendable or must be destroyed.

I have worked in Libya since 1990. My last field trip to the Messak plateau in the southwest ended abruptly in February 2011 with an emergency evacuation on a military aircraft. Before the revolution, I spent three months each year in the desert studying the prehistory of the Messak and nearby Tadrart Acacus mountains, which lie close to the border with Algeria, famous for their 9,000-year-old rock art. Since then, scientific and cultural relations between Libya and the international community have stagnated. Archaeological tourism — a major source of revenue and jobs for locals such as the Tuareg and Tebu people, the two major Saharan ethnic groups in Libya — has stopped. 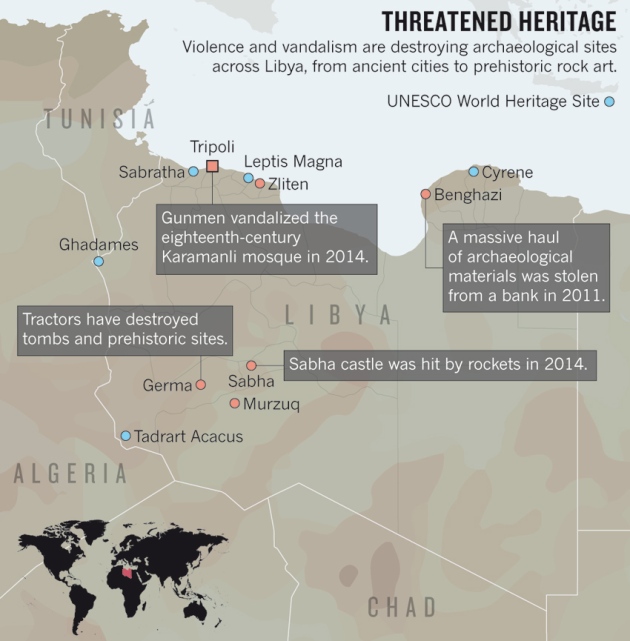 Even though a discussion of cultural heritage might seem out of place in a country devastated by civil war, I argue that scientific research in the region must not be abandoned. As UNESCO recognizes, culture has a powerful role in “building social cohesion and contributing to reconciliation and peace”. We must continue to nurture skills, trust and knowledge about our shared past. Until fieldwork in the region becomes possible again, archaeological grant agencies must fund studies of materials in museum collections and encourage desk-based research in collaboration with Libyan scientists.

Stretching from the Mediterranean Sea to the heart of the Sahara, Libya was a crossroads for many ancient cultures, including the Phoenicians, Greeks and Romans. It hosts five UNESCO World Heritage Sites that illustrate the country's historical diversity (see 'Threatened heritage'): Cyrene, founded in about 630 bc by the Greeks, was a principal town of the Hellenic world; Leptis Magna, once part of the Phoenician city-state of Carthage, was incorporated in 46 bc by the Romans into the province of Africa; Sabratha, west of modern Tripoli, was a Phoenician trading post that became an influential Roman town during the second and third centuries ad; the old town of Ghadames, known as the 'pearl of the desert', is noted for its outstanding traditional architecture and was earlier home to the Romans and Berbers; and the Tadrart Acacus mountains are rich in prehistoric rock art.

These fragile vestiges of the human past are vulnerable to natural and human threats. Harsh environmental conditions — temperature variations and wind erosion — take a toll on rock art and open-air archaeological sites in the desert. These sites are threatened by infrastructure development, reclamation of land for agriculture, exploitation of underground resources such as oil, water and gas, and vandalism. The same applies to sites in towns and villages, such as the classical cities along the Mediterranean coast and the late-first-millennium bc Garamantian cemetery in the ancient Wadi al-Ajal river valley near the town of Germa. 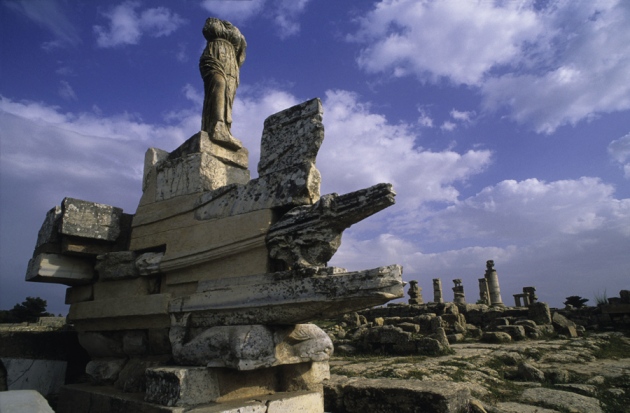 The ancient Greek city of Cyrene is at risk because of nearby construction.

The Tadrart Acacus is a place of unbelievable beauty; it used to be a global tourist destination. Some of its sites were vandalized in 2009; further damage — mostly graffiti — has been reported.

Today, the site is inaccessible: no commercial flight connects Tripoli and Ghat, a nearby town (a weekly military aircraft brings food, essential goods and first-aid equipment). The tarred road between Ghat and Ubari is broken up, and clashes between the Tebu and Tuareg tribes increasingly affect the area.

Perhaps the greatest threat to Libya's diverse heritage is the trafficking of archaeological materials, for profit or to fund radical groups. This has already been documented in Syria and Iraq7. No one has been able to fully assess the situation in Libya. Going to work among the black smoke of grenades, the men and women of the Libyan Department of Antiquities are doing their best. But museums are closed and the little activity left in the field is limited to the north.

The Gaddafi regime neglected Libyan prehistory and relegated it to folklore. Classical towns such as Sabratha, Cyrene and Leptis Magna were viewed negatively as links to a colonialist past.

Among the hopes sparked by the revolution was the idea of a more modern view of the archaeological and cultural heritage — as a gateway to a shared national identity, a major revenue source and a focus for forging relationships with the rest of the world. Those hopes have been dashed. 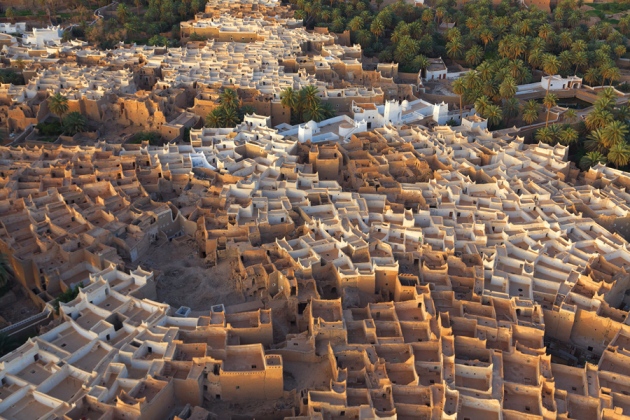 Ghadames, previously home to the Romans, suffered a rocket attack in 2011.

The international community took actions to safeguard Libyan heritage at a UNESCO meeting in Paris at the end of October 2011, while the revolutionaries were still fighting. I learned, in a small Parisian café, that Gaddafi had been killed. The next day, hopes for Libya's future filled the meeting room. Participants unanimously decided to build a shared programme for the training of young Libyan archaeologists and scientists in Cyrenaica — the region where the revolution started — and Shahhat (modern Cyrene).

Partnerships between the Libyan government and UNESCO, with funding from Italy, were forged to strengthen Libya's research and stewardship capacity in archaeology. Particular attention was given to building the national archive and training Libyan police, customs officers and workers in the antiquities department in the fight against the trafficking of cultural property.

But few initiatives reached the field and now all efforts have essentially stopped. The escalation of hostilities in the past six months has led many foreign embassies to close and international organizations to move to neighbouring Tunisia. Large parts of North Africa are cut off by the civil war in Libya, the Tuareg rebellion in Niger, insecurity in Chad, Algeria and Mali, the presence of al-Qaeda and ISIS militants, and a large and uncontrolled circulation of weapons. International granting bodies such as universities and European and US research agencies have ceased to support field expeditions.

Being a Saharan archaeologist today is a difficult job. Researchers fear being kidnapped or even killed. Insurance cover is hard to come by. We could transfer our activities to another place, but this would mean abandoning decades of ideas, investment, and relations built with friends and colleagues. It would be hypocritical and sad. I strongly believe that scientific cooperation is an effective way to bring people closer, increase confidence and make cultures more open to one other. 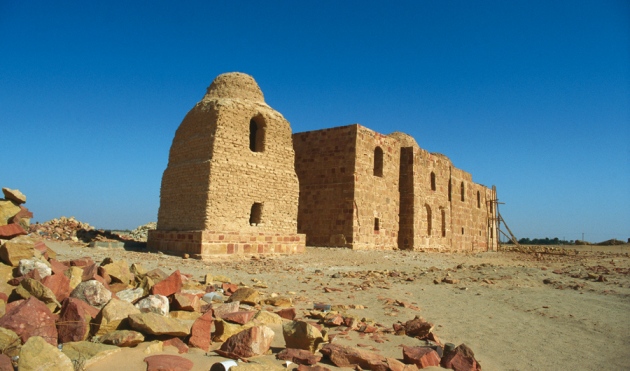 Fieldwork is vital to research and central to fundraising in archaeology. But in Libya — and other violence-wracked countries — archaeology as we have practised it has come to an end. Lengthy excavation campaigns will be impossible for years, if not generations. Researchers must imagine a different future based on other methods.

International funding and attention must return to scientific studies of Libyan heritage. Research should focus on existing materials in museums and collections. Granting bodies should give greater priority to research that can be carried out on computers or in the laboratory. Sample analyses of archaeological materials can be done in international labs, where Libyan scientists should work and be trained.

Building an online library of rock-art sites, with the involvement of Libyan students and colleagues from other countries, would help Libyan scientists to overcome their isolation and regain a sense of identity. Museum collections that span from remote prehistory to the Islamic cultures should be digitized and made freely available to a global audience. Unpublished collections held by international teams should also be digitized and shared online. Remote analyses of satellite imagery, for example, has been used to reveal lost Saharan cities (see go.nature.com/8y1gxh).

International cooperation between local and foreign groups working in Libya must be supported. Travel funding and visas for Libyan scientists to work temporarily overseas should be found. And mobility programmes for scientists such as the European Union's Erasmus Mundus should be exploited — Libya's application numbers have been historically low. Energy companies and others with commercial interests in Libya should be encouraged to work with local stakeholders to help to train local personnel in scientific research.

Without these steps, archaeological research in Libya, already moribund, will soon die. It would be gravely disappointing and paradoxical if after years of neglect under the Gaddafi regime Libyan archaeological heritage is once again be abandoned. As well as a failure of the 2011 revolution, it would be a missed opportunity for a generation of young Libyan archaeologists — and a tragedy for the safeguarding of monuments and sites of universal and outstanding value.