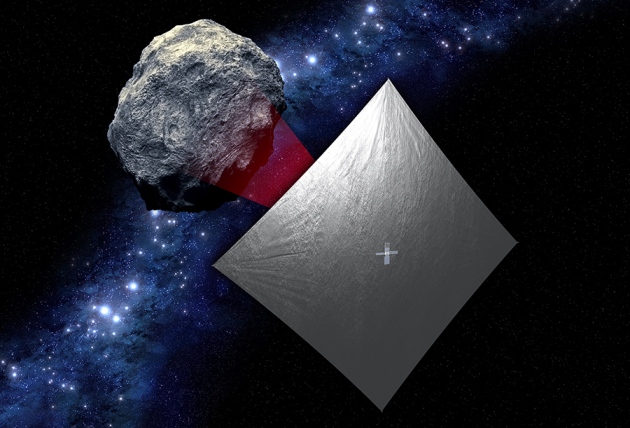 NASA's Near Earth Asteroid Scout, seen here in an artist's impression, will test solar-sail technology as it visits a space rock.

CubeSats — spacecraft built from 10-centimetre-sided cubes, often with off-the-shelf parts — are already ubiquitous in near-Earth orbit, doing everything from Earth observation to studies of bacterial proteins in space. Now scientists are itching to send them farther afield, and more than a dozen deep-space CubeSats are in the pipeline.

The cost — typically no more than US$10 million for an interplanetary mission — means that the mini-craft can take risks that a more costly venture could not. They can also work in swarms, which allows new kinds of experiments. CubeSats generally piggyback on the launch of other missions, and whereas trips to low-Earth orbit, such as the cargo ships that shuttle to the International Space Station, are relatively common, missions to other parts of the Solar System are much rarer.

Lifts are so hard to come by that the first interplanetary CubeSat — NASA’s twin INSPIRE mini-spacecraft, intended to test key technology for future missions — has been waiting for almost two years. “We still have to find a ride,” says Anthony Freeman, who manages the Innovation Foundry at NASA’s Jet Propulsion Laboratory in Pasadena, California.

Engineers are starting to overcome these problems, says Roger Walker, who oversees CubeSat development at the European Space Agency (ESA). To solve the communications problem, ESA’s first interplanetary CubeSats will talk to Earth through a mothership. CubeSats will take part in the joint ESA–NASA Asteroid Impact and Deflection Assessment (AIDA) mission, planned for 2020, where they will take on risky jobs such as up-close data collection as a larger probe plunges into an asteroid. 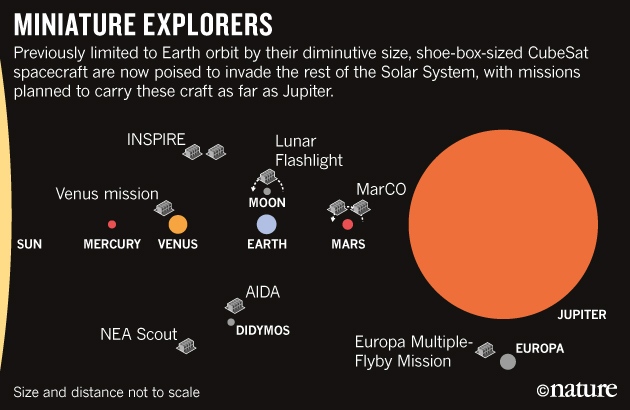 NASA’s planned mission to Europa, currently under development, would also use the mother–daughter model, deploying a fleet of CubeSats to make close fly-bys of the Jovian moon. Scientists think that Europa could harbour life under its icy surface.

Lone deep-space CubeSat missions are also on the horizon. NASA has developed a miniature radio-communication system capable of talking directly to Earth from Mars and beyond. The agency will test the system on INSPIRE — which has a side-mission of mapping interactions between Earth’s magnetic field and the solar wind — and on Mars Cube One (MarCO), twin communication satellites scheduled to fly on the InSight mission to Mars when it launches in 2018 after a two-year delay. NASA has also developed tiny, cold-gas firing thrusters for propulsion, and radiation-resistant electronics that can survive beyond the protection of Earth’s magnetic field.

Meanwhile, firms in Europe are developing high-efficiency ion engines, and a company in Rome called IMT is looking at ways to power such engines with deployable solar panels that can turn to constantly face the Sun. Together, all these technologies make solo CubeSats missions feasible, says Walker.

Freeman predicts that more than a hundred CubeSats could be dispatched throughout the Solar System by the end of the next decade — but only if they can get into space. He is calling on all space agencies to agree to carry at least one CubeSat on each major planetary mission. Walker agrees: “It would really stimulate the area. Ultimately, that’s the main problem to overcome for interplanetary CubeSats, alongside communications.” This would mean forging plans for a CubeSat tag-along early in the mission’s design phase.

To cope with the large number of CubeSat proposals, NASA also wants to see more low-cost commercial launchers developed, to carry tens to hundreds of kilograms of payload, in contrast to the 5 tonnes typical of launchers designed for communications satellites. Freeman says that such smaller rockets could carry perhaps a few dozen 5-kg CubeSats to low-Earth orbit, or be adapted to include an upper stage that could take a single CubeSat to deep space. He hopes to use a similar method to send a free-flying probe to Venus, where it would skim through the planet’s acidic atmosphere.

CubeSats aimed for the Moon might get an easier ride. NASA’s Space Launch System, a heavy-lift rocket designed to send people beyond Earth’s orbit, will carry 13 CubeSats and an uncrewed Orion capsule on its maiden launch in 2018. The cargo will include Lunar Flashlight, which will use a reflected beam of light to look for icy deposits in the Moon’s dark craters, and Near-Earth Asteroid (NEA) Scout, designed to explore a nearby asteroid.

ESA is developing a separate lunar approach. Together with Surrey Satellite Technology Ltd (SSTL) in Guildford, UK, and the Goonhilly Earth Station in Helston, UK, it is developing a system that could solve two problems: a commercial mothership that would provide transport to the Moon and a data relay for dozens of CubeSats, for a fee of around £5 million (US$6.6 mllion) per craft. Eventually, such a model could expand, says the SSTL’s Christopher Saunders. “Essentially, we want to build a Solar-System internet,” he told the Interplanetary CubeSat workshop in Oxford in late May.

According to Freeman, CubeSats will soon be able to carry instruments that would have seemed off-limits only a few years ago, such as high-resolution imagers and radar altimeters. And a recent investigation by the US National Academies of Sciences, Engineering and Medicine of CubeSats’ potential concluded that the probes are capable of doing “fantastic science”, Thomas Zurbuchen, a space scientist at the University of Michigan in Ann Arbor, said at the meeting. “Much of it has yet to be imagined.”

This article previously included a photograph of a solar sail that was incorrectly described as belonging to the Near Earth Asteroid Scout craft. The image has now been updated.