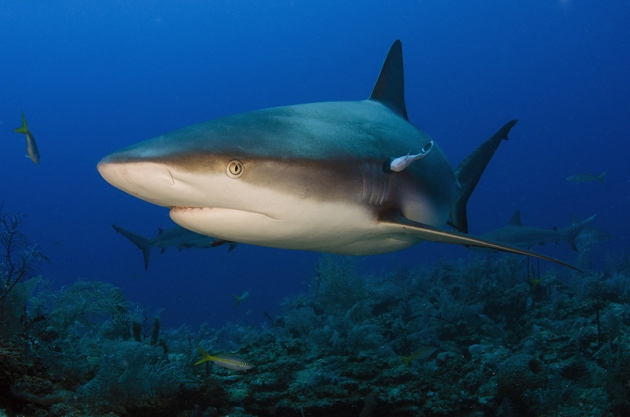 The Caribbean reef shark (Carcharhinus perezii) is one of many species that can be seen in Cuban waters.

Cuba is surrounded by sharks. Fishermen catch them, residents eat them and, increasingly, tourists are coming to see them. Now the island nation is gearing up to manage them, and its efforts are bolstering a nascent environmental partnership with the United States.

“It’s a big step forward for Cuba and the region,” says Jorge Angulo-Valdés, head of the Marine Conservation Group at the University of Havana’s Center for Marine Research and a visiting professor at the University of Florida in Gainesville. “It’s time for us to get together, identify common goals in resource management and make them work.”

On 21 October, Cuba plans to release a management plan that will lay the groundwork for research and, eventually, regulations to protect extensive but largely undocumented shark and ray populations. Roughly half of the 100 species of shark resident in the Caribbean Sea and Gulf of Mexico have been seen in Cuban waters, including some — such as the whitetip (Carcharhinus longimanus) and longfin mako (Isurus paucus) — that have experienced sharp declines elsewhere. The Cuban government has consulted with environmentalists and academics from the United States and other countries in developing the plan.

“Cuba is a kind of biodiversity epicentre for sharks,” says Robert Hueter, director of the Center for Shark Research at the Mote Marine Laboratory and Aquarium in Sarasota, Florida, who is one of those working with the Cuban scientists. “The science is not at a level yet to do rigorous stock estimates, but we are moving in that direction with this plan.”

Most of what is known about Cuba’s shark populations has come from the fishing industry, which often captures sharks as by-products of its regular operations. The Cuban government has already established marine protected areas along 20% of its coastline and is planning to expand that network within the 70,000 square kilometres of its coastal fishery. It has also begun to regulate the equipment used in fishing, and is looking to establish catch limits for various fish species, including sharks.

Both US and Cuban scientists say that the collaboration is helping to pave the way for more formal cooperation now that the two cold-war foes have re-established political relations. In April, the US National Oceanic and Atmospheric Administration (NOAA) sent a research vessel on a cruise around the island with Cuban scientists. And on 5 October, US secretary of state John Kerry and Cuban officials announced at an oceans conference in Chile that the two nations were finalizing plans to cooperate on research, education and management in marine protected areas. The agreement could be finalized as early as next month, says Billy Causey, regional director for NOAA’s Office of National Marine Sanctuaries in Key West, Florida.

US environmentalists began pushing the idea of cooperation with Cuba on marine conservation after the 2008 election of President Barack Obama, who pledged during the campaign to engage with Cuba. The first signs of real progress came in September 2009, says Daniel Whittle, who heads the Cuba programme for the Environmental Defense Fund (EDF), an environmental group based in New York City. Then, the United States allowed four Cuban scientists, three of whom were marine and coastal researchers, to attend a series of meetings in the country. And in November last year, Angulo-Valdés was part of a cadre of Cuban scientists that visited the state department and several members of Congress. A month later, Obama ordered the restoration of diplomatic ties with Cuba.

“Finally the two governments publicly acknowledged that they are in fact working directly together on environmental issues.”

“It’s slowly beginning to change,” says Whittle, referring to links between the nations. “That’s why the announcement in Chile was so significant: finally the two governments publicly acknowledged that they are in fact working directly together on environmental issues.”

The EDF and other conservation groups have been trying to build cooperation between Cuba, Mexico and the United States within the Gulf of Mexico. NOAA’s April cruise, which focused on tallying the larvae of bluefin tuna (Thunnus thynnus) in Cuban and Mexican waters, marked the first formal government engagement on that front since Obama’s December announcement, Causey says.

The main question facing the shark-management plan is whether the Cuban government will be able to mobilize enough money to implement it. The EDF and other groups have been raising funds to pay for some of the initial work on the plan, including training fishing crews to identify and report the sharks that they catch. But scientists need to conduct population surveys that are independent of those done by commercial fisheries, and Cuban research institutions are already stretched thin.

The country has only two operational research vessels, and scarce resources to equip and operate them. The kind of tags needed to track shark movements through satellites can cost US$2,500 each. So far, Cuba has tagged just four sharks with such devices.

“We have to see how the government implements the plan, and how they get around the funding problem,” Angulo-Valdés says. “It’s going to be a challenge.”