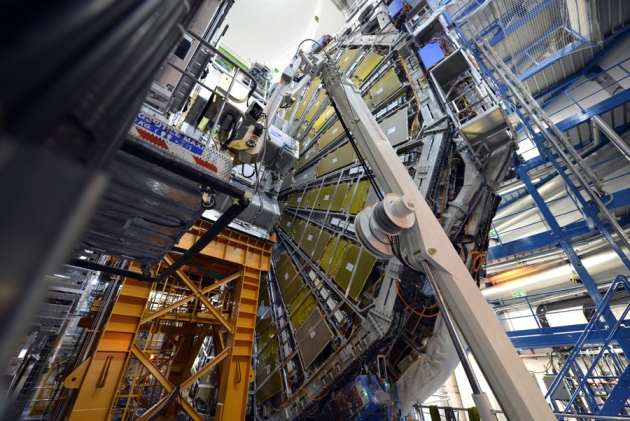 Scientists hope to create WIMPs when the Large Hadron Collider comes back online.

After decades of searching and multiple no-shows, it is crunch time for a leading theory of what comprises dark matter, the mysterious stuff thought to make up around 85% of the Universe’s matter.

The Large Hadron Collider (LHC) at CERN, Europe’s particle-physics lab near Geneva, Switzerland, is scheduled to restart in March after a major upgrade. It is widely seen as the last chance in a generation to create — and thus confirm — theoretical particles known as WIMPs, or weakly interacting massive particles. A super-sensitive ‘direct-detection’ experiment, which is designed to catch naturally occurring WIMPs streaming from the heavens, is also due to start this year.

At the same time, the failure so far to glimpse WIMPs at either the LHC or through direct-detection experiments, combined with surprise signals from others, is fuelling suggestions that dark matter is made of something else. A range of alternatives that were previously considered underdog candidates now look “less exotic”, says Kevork Abazajian, a theorist who studies particle cosmology at the University of California, Irvine.

Whatever dark matter is, most astronomers believe that it is real. The amount of ordinary, ‘visible’ matter does not produce enough gravity to explain the speed at which stars move inside galaxies, or at which galaxies move inside galaxy clusters. Dark matter would solve this mystery because it does not absorb or scatter light, making its presence known only by its gravitational pull on normal matter. Different theories posit different suggestions as to what kind of particle would have these properties.

WIMPs are theoreticians’ darlings. They are relatively heavy — somewhere between 1 giga­electronvolt, or roughly the mass of one proton, and 1 teraelectronvolt — and thus would be relatively slow, or ‘cold’. These properties fit well with the current best models for the evolution of the Universe, in which haloes of cold dark matter are the prime movers in the formation of galaxies and galaxy clusters. WIMPs also fix problems in two separate branches of physics: particle physics and cosmology. The mass of the WIMP and the strength of its interactions with other particles would help to explain why the Higgs boson has the mass it does. But these figures also mean that WIMPs would have been synthesized at just the right rate in the early Universe for the creation of the abundances that theory requires today — a coincidence that is dubbed the ‘WIMP miracle’.

Yet despite being on physicists’ most-wanted list, WIMPs remain on the run. When the LHC shut down for maintenance in 2013, its WIMP searches had come up empty. And the most sensitive of the direct-detection searches, carried out by the Large Underground Xenon (LUX) experiment at the Sanford Underground Research Facility in Lead, South Dakota, found no WIMPs during its first major run in 2013 (see Nature http://doi.org/zh8; 2013).

But WIMPs could show up this year. The souped-up LHC will smash together protons with combined energies of 13 teraelectronvolts — versus the 8 teraelectronvolts of the previous run: the extra energy will be capable of creating particles that were not possible to make before. Also, this summer, a WIMP detector called the XENON1T experiment, based under Gran Sasso in central Italy is scheduled to go live. It will have a sensitivity 50 times greater than LUX’s, says XENON1T spokesperson Rafael Lang, a particle physicist at Columbia University in New York.

But the string of disappointments means that some theorists are already beginning to back away from WIMPs and look at alternatives, says cosmologist Scott Dodelson of the Fermi National Accelerator Laboratory in Batavia, Illinois.

One possibility is neutrinos, particles that interact weakly with other types of matter, a requirement for dark matter. The properties of the three known types of neutrino are not quite right for dark matter. But a hypothetical fourth type — called the ‘sterile’ neutrino, because it would interact even more weakly than its cousins — could be a suitable candidate.

In December 2014, the European Space Agency’s Planck observatory released a map of ancient radiation from the early Universe that all but ruled out the existence of a sterile neutrino with a small mass like the other neutrinos, as did results from the Daya Bay neutrino experiment in China’s Guangdong province.

But back in February 2014, astrophysicist Esra Bülbül of Harvard-Smithsonian Center for Astrophysics in Cambridge, Massachusetts, and her collaborators reported a mysterious photon signal coming from 73 galaxy clusters (E. Bulbul et al. Preprint at http://arxiv.org/abs/1402.2301; 2014). The photons’ wavelength was consistent with the decay of sterile neutrinos that weigh about 7 kiloelectronvolts — at least 30,000 times heavier than ordinary neutrinos.

Their results, posted on the arXiv repository, unleashed a flurry of proposed mechanisms by which dark matter could have produced the signal. Super-heavy neutrinos would still be light compared with WIMPs. According to conventional theories, this would make them ‘warm’ and they would not be a good fit with models of the Universe’s evolution. But Abazajian says that the early Universe could have produced cold heavy neutrinos, and that these particles could fit with the current best models of galaxy formation, in some cases better than WIMPs (see, for example, K. N. Abazajian Phys. Rev. Lett.112,161303; 2014). “The WIMP miracle does have a theoretical nicety to it,” says Abazajian — but, he adds, a heavy neutrino solves many of the same problems as WIMPs do.

Evidence for a heavy neutrino “would be really revolutionary”, Dodelson says. So far, however, teams that have attempted to reproduce Bülbül’s result have had mixed success.

Another WIMP alternative is the axion, a hypothetical particle proposed in the 1970s. Axions would spontaneously transmute into photons in a magnetic field, providing a means to detect them. Although a few experiments have failed, physicists led by Leslie Rosenberg of the University of Washington in Seattle is currently upgrading the sensitivity of its Axion Dark Matter Experiment. The team says that it will make or break the case for the axion.

Even Rosenberg has not given up on WIMPs, however. “There is nervousness about WIMP dark matter,” he says. But, “the LHC 2015 data set will need exploration before you should get too nervous.”