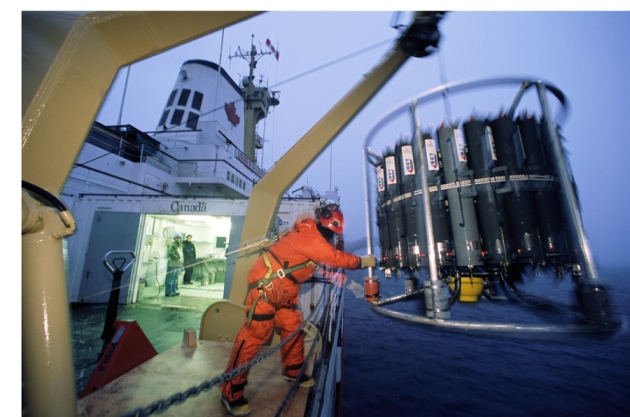 The project aims to make oceanographic research accessible to more scientists and enthusiasts.

An open-source approach to collecting oceanographic information could democratize marine science, a team of US researchers believes. If successful, it could bring down the cost of obtaining three crucial pieces of data needed by marine scientists.

Just about the first action involved in any experiment at sea is the casting overboard of a conductivity, temperature and depth instrument, known as a CTD.

From the Arctic to the tropics, every year CTDs sink through the water beneath the keels of research vessels. As they descend, they record the information that gives them their name and build a profile of how temperature and salinity — measured by means of the water's electrical conductivity — change as they move further from the surface.

The team thinks that it can produce open-source blueprints for a CTD that will allow anyone with a modicum of technical nous to build their own device for a fraction of the cost of a ready-made version.

“The CTD is the workhorse of the ocean scientist. It’s an essential, a must-have tool,” says Kersey Sturdivant, a marine scientist at Duke University Marine Lab in Beaufort, North Carolina. “But CTDs are not cheap.”

At present, most CTDs are bought from commercial companies, and can cost thousands of dollars, says Sturdivant.

Sturdivant is part of the team behind OpenCTD, a project aiming to produce design plans that will allow anyone to build their own instrument for around US$200 from off-the-shelf parts. Their device — currently in the prototype stage — will work down to 200 metres. This is the depth required by most researchers working off small boats, but the team says that it should be adaptable to deeper waters if people so desire.

OpenCTD is trying to raise $10,000 from the public through a crowdsourcing website. The team will use this money to test and calibrate its prototype later this year, and will then produce an electronic book of the plans and prepare a peer-reviewed paper detailing the project and instrument for publication.

Sturdivant says that the instrument is not a direct competitor to commercial devices. Rather, it could be used in conjunction with them, enabling researchers to produce many extra measurements of a given area. It will also be within the reach of amateurs and teachers, potentially adding a new set of citizen scientists to those who collect basic data on the oceans.

John Wynar, part of the moorings and sensors group at Britain's National Oceanography Centre in Southampton, says that it is hard to draw definitive conclusions about the utility of an instrument that has not yet been built. But he adds that the water in shallow regions, where this instrument would work, often shows relatively large changes in characteristics, and so requires lower precision in monitoring.

But although this might mean that OpenCTD is a “fairly ‘agricultural’ type of instrument”, he says, “it may well prove to inspire a younger generation of students and encourage them to get interested in ocean science and pursue it as a career”.

Thomas Dahlgren, a marine ecologist at Uni Environment, a private research institute affiliated with the University of Bergen in Norway, is one of those who have pledged funding for the project. He thinks that the low-cost instrument could be particularly attractive to smaller consultancy companies and even to developing nations.

Dahlgren is also looking at a use closer to home: “I have a son who is eight,” he says. “It would be great to build one together with him.”