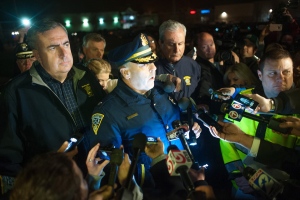 As authorities searched for suspects after the 15 April Boston Marathon bombing, social-media users conducted their own manhunt.

The social news website Reddit was left red-faced last week after misidentifying suspects in the bombings at the Boston Marathon in Massachusetts, raising questions about whether crowdsourcing might do more harm than good in during a manhunt. But work by an international team of scientists suggests that crowdsourcing is a powerful tool in such situations, if used carefully.

Some social-networking enthusiasts contend that online tools such as Facebook or Reddit can harness the help of huge numbers of volunteers to assist in investigations. For example, photos of 'wanted' suspects can be spread rapidly among users on social networks. Critics point out, however, that by responding in haste or with misdirected zeal, users can make false accusations and point law-enforcement forces officers in the wrong direction, as seems to have happened in the Boston case.

Iyad Rahwan, a computer scientist at the Masdar Institute of Science and Technology in Abu Dhabi, and his colleagues showed last year that networks such as Twitter and Facebook can be harnessed to find individuals across the globe from just their photos1. Now, in a preprint posted on the online repository arXiv.org, the researchers explain what made that experiment successful. They say that participants responded to the urgency of the search not by sending out messages in an indiscriminate, blind panic, but by becoming more focused and directed about whom they contacted2.

The original experiment by Rahwan and colleagues constituted their entry in the Tag Challenge, a competition staged by the US state department in 2012. The Tag Challenge required teams to find persons playing the role of jewel thieves in New York, Washington DC, London, Stockholm and Bratislava within 12 hours — using only a mugshot of each target, released on the morning of the competition.

Rahwan and his team used crowdsourcing to find the targets, offering cash incentives to individuals for uploading photos of suspects to the web and for recruiting more searchers. Although they failed to locate the targets in London and Stockholm, the team won the competition1.

Analysis of the information provided by participants now shows that communications such as tweets became more specific and directed towards other users in the target cities as the day of the competition approached. “Despite increasing time pressure and its associated cognitive load, people actually became more selective in their recruitment of others,” says Rahwan.

“This makes good sense to me, and it's what I would have expected,” says Peter Dodds, a computer scientist at the University of Vermont in Burlington. In 2003, Dodds and his colleagues conducted a ‘social-search’ experiment[3] to route e-mails to a few target people worldwide — an electronic version of the ‘small-world’ experiment by psychologist Stanley Milgram in 1967, in which he asked people to forward mail to reach individuals identified only by name, job and city4 — and also found that successful searches are focused rather than scattershot.

Defence and security organizations have a growing interest in such studies. In 2009, the US Defense Advanced Research Projects Agency (DARPA) staged the DARPA Network Challenge, in which competitors were to locate ten red weather balloons tethered at random locations across the United States. The winning team was led by Manuel Cebrian, a computer scientist at the Massachusetts Institute of Technology (MIT) in Cambridge, who collaborated with Rahwan and his colleagues for the Tag Challenge. The MIT team found the red balloons in 9 hours by harnessing social media5, 6.

How does all this reflect on the search for the Boston bombers? Last week, Reddit users, acting on photographs of suspects posted by the US Federal Bureau of Investigation, collectively named several individuals who had nothing to do with the bombings.

“The Boston manhunt is an example of how things can go wrong,” says Rahwan. “It appears that information was very much misdirected. This may be, in part, due to the high profile of the event, which led everyone to want to help even if they were incapable or misinformed.”

“There may be a tradeoff between mass mobilization and effective mobilization of a more specialized group of reliable and well-informed individuals,” Rahwan adds. “Having too many people involved might actually make things worse.” He and his colleagues have begun to explore schemes for supporting the checking and verification of crowdsourced reporting7.

“I think the web-enhanced ‘collective detective’ is potentially very powerful and is here to stay,” says Dodds. And it's not just about finding bad guys, he says. Missing children might be sought this way, too, for example. “But we have to ensure that the distributed social search is always used for good — for example, that well-intentioned people are prevented from collectively generating errors leading to witch hunts.”