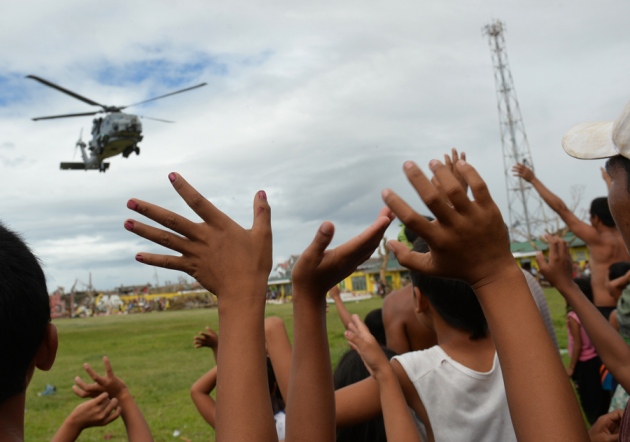 Residents of Giporlos, Philippines, wave to a US Navy helicopter. Disaster relief operations have benefited from maps created with the online help of volunteers from around the world.

After typhoon Haiyan smashed into the Philippines on 8 November, an army of volunteers mobilized and worked around the clock to help guide relief efforts. But these were no boots on the ground. Instead, they were citizens from around the world who quickly analysed satellite imagery and other data, generating maps to provide relief agencies with invaluable crowdsourced information.

Crowdsourced disaster response, until a few years ago informal and often haphazard, is now getting more organized, and is being embraced by official humanitarian organizations and integrated into relief operations. Volunteer efforts have multiplied thanks to the arrival of online mapping tools, the increasing popularity of social networks such as Twitter and Facebook, and the spread of mobile phones. A suite of volunteer groups are emerging that contribute to disaster response in tight coordination with conventional relief organizations.

The tighter cooperation was evident in the response to Haiyan, as the UN Office for the Coordination of Humanitarian Affairs (OCHA) for the first time deployed officials charged specifically with coordinating crowdsourced mapping with volunteer groups.

Take the Humanitarian OpenStreetMap Team (HOT), one of the ten digital volunteer organizations officially tasked by the OCHA and the Philippine Red Cross the day before typhoon Haiyan made landfall. HOT, a US-based non-governmental organization, was launched in 2009, and when an earthquake struck Haiti the next year, it generated the best maps of the devastation within days — and so caught the serious attention of relief organizations.

After Haiyan, many relief organizations, including the OCHA and the medical aid group Médecins Sans Frontières (also known as Doctors Without Borders), have gone into the Philippines carrying with them continually updated maps of the country generated by more than 1,000 OpenStreetMap volunteers from 82 countries.

The HOT team has used satellite and aerial imagery and other geographical data sets to furnish maps with more than two million annotations and features such as damaged and intact buildings, blocked and open roads, and the locations of key infrastructure such as hospitals.

"The speed with which HOT has been able to digitize the affected areas in order to provide base layers for mapping products has been incredible for us," says Andrej Verity, who oversees the OCHA's crowdsourcing activities for the disaster in the Philippines.

Verity is a co-founder of the Digital Humanitarian Network (DHN), an umbrella group of 16 volunteer technology organizations created in 2012 to act as an interface between those groups and conventional humanitarian organizations. The DHN brings together expertise in geographical information systems, online mapping, data analysis and statistics. It also develops user-friendly tools that enable untrained volunteers to contribute to responses.

Another group, the Standby Task Force, has tapped more than one million tweets, text messages and other social-media objects to track the unfolding disaster, and to map damage, infrastructure and user needs. The task force uses MicroMappers, a suite of apps designed for disaster-response efforts and launched in September, which enables anyone to, for example, tag tweets or photos to show that they indicate infrastructure damage or population displacements.

Social-media data are noisier than HOT mapping, and analysis of them is less straightforward. MicroMappers used machine-learning software trained to recognize tweets relevant to the relief response, which reduced the number of Tweets needing to be manually tagged by around 80% and reduces the workload of volunteers, explains Patrick Meier of the Qatar Computing Research Institute in Doha, who helped to develop MicroMappers. A beta version of the technology is scheduled to be formally unveiled this week at the fifth annual Crisis Mappers Conference in Nairobi.

Verity says that although such social-media tools provide extra information, more work is needed to integrate them into relief responses.

Established players such as national space agencies and commercial satellite-image providers generate the majority of the geographical and imagery data sets needed by mappers in a disaster response; some of this information is shared at no cost under the International Charter on Space and Major Disasters.

Some of the best pre- and post-event analysis of satellite imagery, for example, was generated by the European Union's Copernicus Emergency Management Service (GIO-EMS), which published its first imagery within 36 hours of Haiyan's landfall. Its comparisons of pre- and post-event imagery provided detailed damage-assessment maps of the city of Tacloban, the worst-hit area, shortly after that. 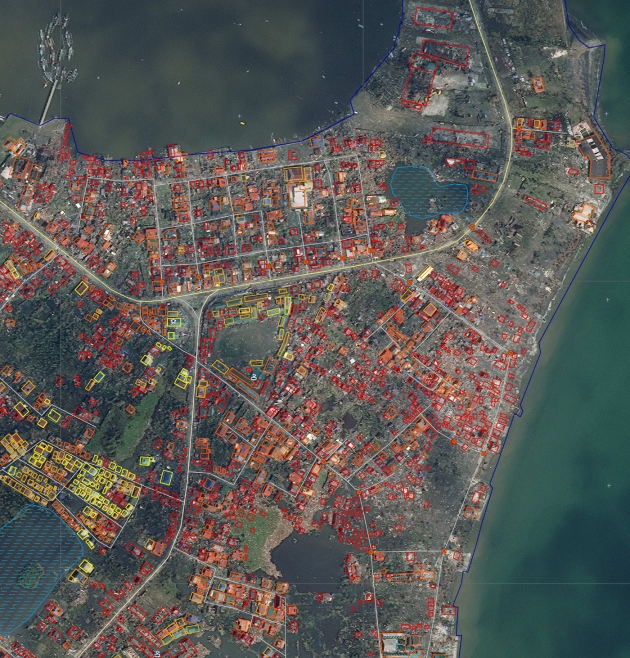 By comparing satellite images of Tacloban, Philippines, before and after typhoon Haiyan struck, the European Union's Copernicus Emergency Management Service estimated that 58% of its built-up areas were either destroyed (red buildings) or seriously damaged (dark orange buildings).

Such institutions would like to automate analyses to, for example, detect damage at the resolution of individual buildings in near real time, says Guido Lemoine, who heads the Geospatial Emergency Management Action group at the European Union's Joint Research Centre in Ispra, Italy. But for now, such tasks still require people to visually inspect and tag imagery — which is where crowdsourcing can be of great help, he says.

Crowdsourced mapping efforts represent a "key technological change", says Lemoine. "They are getting more mature, and have much better coordination with established disaster-response mechanisms.”