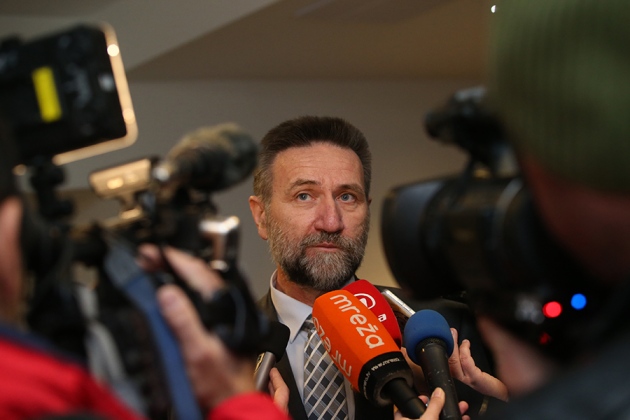 In a plagiarism scandal in Croatia, the country’s highest-level research ethics committee is clashing with its science minister — who says he won't step down after the committee found he had copied another scholar’s work. Scientists say the case raises questions about academic integrity at the top of a research system that is already riven with misconduct allegations.

Pavo Barišić, a philosopher at the University of Split, became Croatia’s science minister in October 2016. Soon after that, Croatian media began reporting allegations that Barišić had reproduced text without attributing other scholars in a review article that first appeared in 2008 in a local journal, Synthesis Philosophica. The charges were old — they had been raised by four other philosophers in 2011 — but Croatia’s parliament-appointed Committee for Ethics in Science and Higher Education (CESHE) said it would investigate.

On 9 January, the committee's report was leaked to the local press. The CESHE, which has not yet formally published the report, concluded that a footnote in Barišić's article used text copied from a blogpost by an American international-affairs specialist, Stephen Schlesinger, at the Century Foundation in New York City. Barišić's article had other problems too — such as his description of ideas from the deceased US political scientist Samuel Huntington without attribution — but the committee didn't agree on whether that constituted plagiarism.

In the months beforehand, Barišić maintained that he had done nothing wrong — even as academics in Croatia and abroad called for his resignation. The minister pointed out that in 2011, an ethics committee at the University of Split had dismissed the allegations as ill-founded. In December 2016, the then-head of the CESHE, Vlatko Silobrčić, resigned, alleging government pressure to drop the case.

By then, Barišić had changed his stance. He told journalists that he had taken text from Schlesinger without attribution, and had apologised to him. But the minister said that the fault was merely a “typographic error” — so there was no need for him to resign. After the allegations had first surfaced in 2011, later translations and a later republication of the article in a book did attribute Schlesinger, he noted. (These later versions also corrected other errors, such as the lack of attribution to Huntington.) On 14 January, Barišić’s original article was amended too, although only the Schlesinger footnote was altered.

Barišić did not reply to Nature’s request for comment.

The ethics committee has no power to impose sanctions, but calls for Barišić’s resignation have intensified. Saša Zelenika, an engineer at the University of Rijeka who was Croatia's assistant science minister in 2012–14, says that Barišić has repeatedly misled the public about the matter. “The minister should definitely resign," he says.

Ivan Dikić, a Croatian-born biochemist at the Goethe University of Frankfurt in Germany, wrote an open letter to Croatia’s Prime Minister Andrej Plenković on 11 January, saying that Barišić’s actions did not show he could responsibly lead the science ministry. And five days later, Dikić wrote a second lengthy letter, accusing Barišić of further plagiarism in several other places in his 2008 article.

But Barišić has some support. Other prominent Croatian scientists said in a newspaper article that the case was overblown, given the small amount of plagiarized text. Plenković said that he would stand by his minister. And on 15 January, another open letter — signed by 100 or so scientists, including some of Barišić's colleagues at the University of Split — supported Barišić, saying that his “small omission” could not be considered plagiarism.

The case has wider implications than a back-and-forth about plagiarism and the minister’s responsibility, Zelenika says. He sees the reaction to it as emblematic of Croatia’s struggles to crack down on scientific cheating. In 2008, for example, dozens of the country's professors were arrested on charges of selling exam scripts — many were later found guilty — while studies have documented widespread plagiarism among Croatian university students1. Other politicians have fallen foul of plagiarism allegations, too. In 2014, for example, the dean of Zagreb's police academy found that the parliament’s current vice-president, Milijan Brkić, had plagiarized large parts of his graduate dissertation on policing. Brkić has not resigned, but has to write another thesis.

Some of those lining up on Barišić’s side are now seeking to limit the CESHE’s investigational powers. In November 2016, academic heads at the University of Zagreb initiated a case in Croatia’s constitutional court to review whether the CESHE should retain its statutory authority to pronounce on university ethics disputes. If the case removes CESHE's authority, then Croatia will have diluted an important institution that seeks to uphold its scientific integrity, Zelenika says.