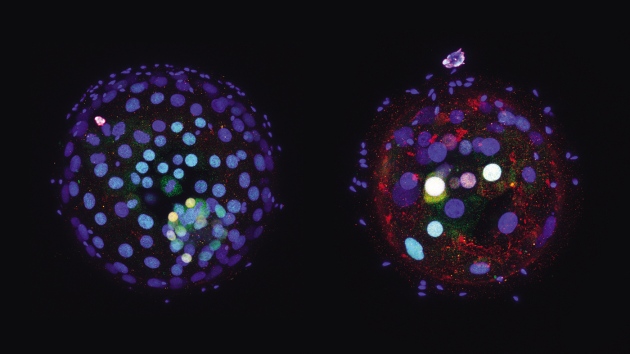 CRISPR was used to disrupt a protein important in human embryo development.

Gene-edited human embryos have offered a glimpse into the earliest stages of development, while hinting at the role of a pivotal protein that guides embryo growth.

The first-of-its-kind study stands in contrast to previous research that attempted to fix disease-causing mutations in human embryos, in the hope of eventually preventing genetic disorders. Whereas those studies raised concerns over potential ‘designer babies’, the latest paper describes basic research that aims to understand human embryo development and causes of miscarriage.

Published online today in Nature1, the study relied on CRISPR–Cas9, a gene-editing system that can make precise changes to DNA in the genome. In this case, researchers harnessed CRISPR–Cas9 to disrupt the production of a protein called OCT4 that is important for embryo development.

Researchers have traditionally done such studies in mouse embryos, which are more plentiful and carry fewer ethical considerations than human embryos. But the latest study highlights key differences between the role of OCT4 in human and in mouse embryos, underscoring the limitations of relying on animal models, says stem-cell scientist Dieter Egli of Columbia University in New York City.

“If we are to truly understand human embryonic development and improve human health, we need to work directly on human embryos,” he says. “We cannot rely only on inference from model organisms.”

To perform the study, a team led by developmental biologist Kathy Niakan of the Francis Crick Institute in London used a total of 58 embryos that had been generated in fertility clinics as a result of in vitro fertilization (IVF) treatments. The embryos were no longer needed for IVF and had been donated for research. The UK Human Fertilisation and Embryology Authority granted permission to do the study — the first time a national regulator has approved research involving gene editing in human embryos (previous studies in other countries were endorsed by local review boards).

The team injected the molecular machinery needed for CRISPR–Cas9 gene editing when the fertilized eggs, or zygotes, consisted of just one cell and then followed their development in the lab for a week.

It soon became clear that normal development had derailed in embryos that lacked normal levels of OCT4. About half of the controls (which had unaltered, normal OCT4 levels) developed to form multicellular embryos called blastocysts. Of the edited embryos with disrupted OCT4 levels, only 19% made it that far.

The results will reassure scientists that CRISPR–Cas9 is efficient enough for studies in human embryos, says Fredrik Lanner, a developmental biologist at the Karolinska Institute in Stockholm. “If you do this in mice, you can test hundreds of embryos,” he says. “But you have a limited access to human embryos.”

Lanner, whose lab is conducting studies with CRISPR of other genes that are crucial for embryo development, points to the importance of painstakingly optimizing the experimental conditions in mouse embryos before moving the studies to human embryos, as Niakan’s team had done.

But additional studies in human embryos will still be needed to pinpoint what OCT4 is doing. The differences between mouse and human embryos were striking, says Amy Ralston, a developmental biologist at Michigan State University in East Lansing who has studied the protein in mice. Niakan's team found that human embryos stopped growing earlier than mouse embryos lacking the protein and showed different patterns of gene expression. There were also unexpected abnormalities in the cells that give rise to the placenta.

The latter finding is particularly important, Niakan says, because researchers have poor models for studying placenta development — and for understanding how the process can go awry. The research could also eventually yield ways to boost the success rate of IVF and help explain why some pregnancies fail, she says.