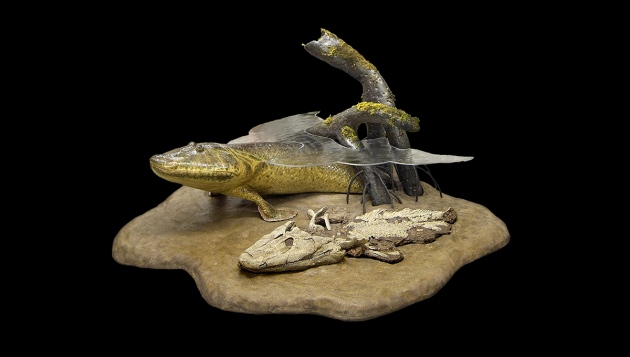 A model and fossil of Tiktaalik roseae, a transitional fossil that illustrates how fish began to develop limbs.

Most summers since 1893, young developmental and evolutionary biologists have flocked to Woods Hole, Massachusetts, to master the tricks of their trade. At the world-famous Marine Biological Laboratory there, students in its annual embryology course dissect sea urchins and comb jellies, and graft cells together from different animals. But for the last three years, the keen apprentices have been learning something new: gene editing.

The precise, efficient CRISPR–Cas9 gene-editing technique has already taken life-sciences labs by storm. Now it is sweeping through evo-devo, the field that seeks to explain the developmental changes underlying evolutionary adaptations.

Rather than simply infer what caused historic transitions, such as how fish developed limbs, scientists can check their hypotheses directly with CRISPR. The idea is simple: cut out the fish genes thought to be involved in making fins, and see whether the fish start to form something resembling feet.

That is exactly what researchers report today in Nature, using CRISPR to help explain how fish developed feet and started walking1. Others have wielded the technique to determine how butterflies evolved exquisite colour vision, and how crustaceans acquired claws.

“CRISPR is a revolution all across biology, but for evo-devo it’s transformative,” says Arnaud Martin, an evolutionary developmental biologist at George Washington University in Washington DC. “We can do things we were not able to do before.”

Neil Shubin, a palaeontologist and developmental biologist at the University of Chicago in Illinois, has used gene-editing to examine how the tips of fish fins, or rays, were replaced by feet and digits in four-legged land vertebrates, or tetrapods.

While researchers know that ancient fish developed limbs – Shubin led the team that in 2004 discovered a 375-million-year-old fossil that seemed to catch that transition in the act – they also thought that the foot was an evolutionary novelty without an equivalent in fish, because rays and feet are made of different kinds of bone.

But Shubin says gene-editing has changed his mind. His team used CRISPR to engineer zebrafish lacking various combinations of the several hox13 genes they possess – genes that researchers already thought played an important role in laying down fin rays.

None of the mutants grew fully fledged feet, Shubin notes, but some possessed “fingery fins” made of the same kind of bone that builds fingers and toes in tetrapods. “As a palaeontologist I studied and trained thinking these are two different kinds of bones that are completely unrelated developmentally or evolutionarily,” says Shubin. “These results challenge that assumption.”

The zebrafish is a popular model organism, whose genome is regularly manipulated in the lab. But CRISPR vastly sped up the experiments performed by Shubin's team. One next step will be to knock out hox13 genes in fish species that more closely resemble the ancient fish that gained limbs, say Aditya Saxena and Kimberly Cooper, evolutionary developmental biologists at the University of California, San Diego. Those experiments are now conceivable thanks to CRISPR, they note in a commentary that accompanies Shubin's article[2].

There is little reason to think the technique will not work on other, more esoteric species, too. “CRISPR seems to be universally working in any organism,” says Martin, who has successfully applied the technique to a marine crustacean called Parhyale hawaiensis, which is gaining popularity in evo-devo.

In a January Current Biology paper, he and colleague Nipam Patel, at the University of California, Berkeley, found that inactivating different Hox genes in the species messes with the development of specialized appendages such as antennae and claws3. If scientists can successfully rear an animal in the lab so they can gain access to its eggs, they should be able to use CRISPR, Martin says.

Such flexibility is important for evo-devo researchers, says Claude Desplan, a developmental neurobiologist at New York University, whose team applied CRISPR to yellow swallowtail butterflies in a Nature paper published last month, to test a theory about how photoreceptors in their eyes detect a broader spectrum of colours than insects such as fruit flies4. On-going experiments in his lab have applied gene-editing to wasps and ants.

So far, evo-devo researchers have focused on using CRISPR to eliminate a gene’s activity or to introduce genes, such as the one encoding green fluorescent protein, that make it possible to better track an animal’s development5. But Martin expects researchers will soon begin using the tool to precisely alter DNA sequences in animals to test ideas about specific genetic changes. Those could include changes to regulatory DNA sequences that influence where and when a gene is active, which may have contributed to adaptations such as tetrapod limbs.

Researchers could also make an educated guess at the DNA sequences of ancient transitional creatures and insert those into living animals using CRISPR, says Bhart-Anjan Bhullar, a palaeontologist at Yale University in New Haven, Connecticut. Last year, his team used chemicals to modify development pathways in chickens that they thought helped to mould the snouts of theropod dinosaurs into modern birds’ beaks. He hopes to now be able to do such experiments with CRISPR.

Bhullar, who attended last month’s embryology course at Woods Hole, says he’s impressed by the success of gene-editing trials by students there, where scientists had the chance to use CRISPR editing on zebrafish, the crustacean P. hawaiensis, frogs, slipper snails and sea squirts.

With CRISPR, “stuff just works”, Bhullar says. “This is rapidly going to become the standard in evolutionary developmental biology.”