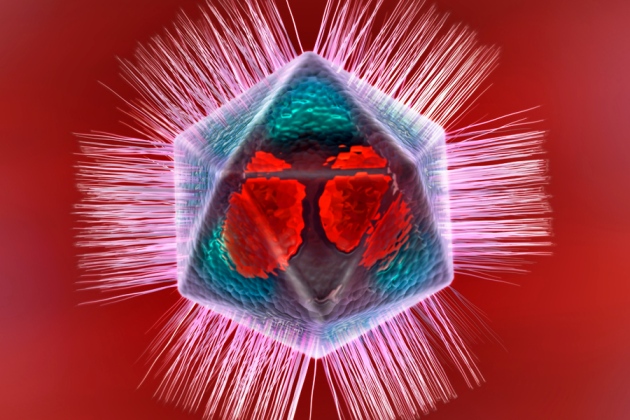 Computer artwork of a particle of the giant mimivirus.

Gigantic mimiviruses fend off invaders using defences similar to the CRISPR system deployed by bacteria and other microorganisms, French researchers report1. They say that the discovery of a working immune system in a mimivirus bolsters their claim that the giant virus represents a new branch in the tree of life.

Mimiviruses are so large that they are visible under a light microscope. Around half a micrometre across, and first found infecting amoebae living in a water tower, they boast genomes that are larger than those of some bacteria. They are distantly related to viruses that include smallpox, but unlike most viruses, they have genes to make amino acids, DNA letters and complex proteins.

That means that they blur the line between non-living viruses and living microbes, says Didier Raoult, a microbiologist at Aix-Marseille University in France, who co-led the study with microbiologist colleague Bernard La Scola. Raoult says that he doesn’t consider the mimivirus to be a typical virus; instead, it is more like a prokaryote — microbes, including bacteria, that lack nuclei.

Like prokaryotes, mimiviruses are plagued by viruses known as virophages, Raoult, La Scola and their colleagues reported in 20082. Six years later, in 2014, they found a virophage — named Zamilon — that infects some kinds of mimivirus but not others3. Raoult hypothesized that these infections, which sap a mimivirus’s capacity to copy itself, could have led to the evolution of a defence system much like CRISPR.

In bacteria and another kind of prokaryote, called archaea, CRISPR systems store a library of short DNA sequences that match those of phages and other invading DNA. When a foreign DNA sequence with matching sequences in this library attacks a cell, specialized ‘Cas’ enzymes unwind the intruder DNA and chop it into pieces, stopping an infection. Biologists have now repurposed CRISPR as a technology to edit genomes.

To determine whether mimiviruses have a similar defence system, Raoult’s team analysed the genomes of 60 mimivirus strains and looked for sequences that match those of the Zamilon virophage. Mimiviruses that were resistant to Zamilon also harboured a short stretch of DNA that matched that of the phage.

Adjacent to these sequences, Raoult’s team found genes encoding enzymes that can degrade and unwind DNA. In CRISPR immunity, too, the genes encoding the Cas enzymes sit beside the sequences that recognize the virus. Blocking activity of different components of the system made the mimiviruses susceptible to Zamilon virophage attack. The findings were published on 29 February in Nature1.

It makes sense for mimiviruses to have an immune system because they must compete for resources against against other microbes and viruses, says Raoult. “They are facing the same kind of challenge that prokaryotes have when they live in communities: they need to fight against viruses and prokaryotes. I even suspect they secrete antibiotic compounds.”

Raoult has argued, somewhat controversially, that mimiviruses constitute a fourth domain of life — alongside bacteria, archaea and eukaryotes. He sees their defence system, which he has named MIMIVIRE, as a very ancient adaptation that further supports them having their own branch on the tree of life.

Francisco Mójica, a microbiologist at the University of Alicante in Spain, who identified CRISPR sequences in prokaryotes in the 1990s, notes that CRISPR components have been found in other viruses, but it is not clear whether the systems function. He suspects that an ancestor of mimiviruses picked up MIMIVIRE from another microbe. “It will certainly be of great interest to identify the mechanism involved in MIMIVIRE immunity,” says Mójica; he expects that it will be very different from CRISPR.

Luciano Marraffini, a bacteriologist at the Rockefeller University in New York, says that Raoult’s team makes a good case that MIMIVIRE is a viral defence system, but agrees that it will be important to work out how it stops virophage infections.

Just as unravelling how CRISPR immunity works led to its repurposing as a genome-editing tool, studying mimiviruses could hold surprises, Marraffini says. “The giant viruses most likely enclose a whole lot of new biology, some of which, including the MIMIVIRE, could find novel application. Maybe in genome editing, maybe in other fields.”