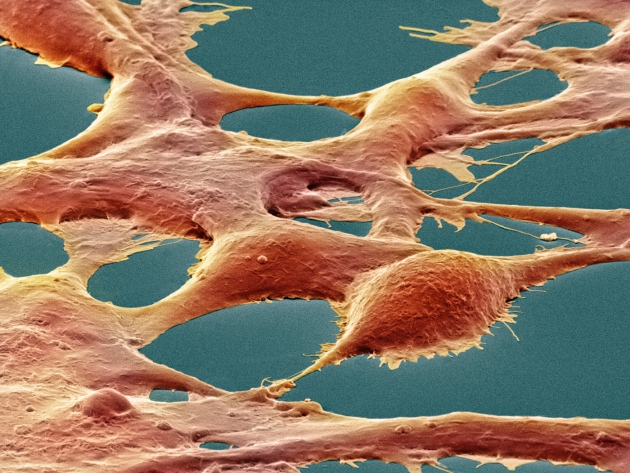 Using human embryonic kidney cells, researchers have come up with a way to edit specific letters in the genome.

The toolbox for editing genes expanded this week, as two research groups announced techniques that enable researchers to make targeted alterations to DNA and RNA. Unlike the original CRISPR gene-editing system — a relatively unpredictable and blunt form of molecular scissors that cut sizeable sections of DNA — the new systems rewrite individual letters, or genetic bases. The ability to alter single bases means that researchers can now attempt to correct more than half of all human genetic diseases1, 2.

The tools, developed by separate teams at the Broad Institute of MIT and Harvard in Cambridge, Massachusetts, are adaptations of the CRISPR system. Whereas most past attempts to use CRISPR-based methods to fix individual bases have been crude affairs — akin to using a machete to remove a wart — the new techniques are more like “precision chemical surgery”, says David Liu, a chemical biologist at the Broad Institute who led one of the studies.

Last year, his group reported3 the first ‘base editing’ method for converting one target DNA letter into another without needing to cleave the genome’s double helix. It has since been used around the world to correct genes in fungi, plants, fish and mice, and even in human embryos harbouring a defective gene that can cause a blood disorder. But that base editor could achieve only two kinds of chemical conversions: a cytosine (C) into a thymine (T) or a guanine (G) into an adenine (A).

The new base editor — described in a paper published on 25 October in Nature1 — works in the other direction, converting  T to C or A to G. It can therefore undo the most common types of ‘point mutation’, which involve single aberrant bases.

In human embryonic kidney cells and bone-cancer cells, the technique made the desired corrections with about 50% efficiency and almost no detectable by-products. By comparison, a more conventional CRISPR-based method, in which scientists insert a strand of DNA containing the desired base change, fixed the same single-base differences with less than 5% efficiency and often caused undesired insertions or deletions of large chunks of DNA.

“This is a major breakthrough in the field of genome editing,” says Jin-Soo Kim, a molecular geneticist at Seoul National University.

Tricks of the trade

Another method, described in a study published on 25 October in Science2 and led by Broad Institute bioengineer Feng Zhang, performs a similar conversion, but for RNA instead of DNA. It turns an A into inosine (I), which is read as a G by the cell’s protein-building machinery. This allows for a temporary correction of a disease-causing mutation without permanent alteration to the genome — a potentially safer option when it comes to gene-fixing therapeutics, although the treatment would need to be administered repeatedly. It would also mean that researchers could alter a treatment as they gain a better understanding of the disease. “If you use RNA therapy,” Zhang says, “you can upgrade.”

His team’s RNA editor is based on a naturally occurring enzyme that rearranges the atoms in A to resemble I instead. The researchers fused the enzyme to a disabled version of the CRISPR system — one involving an RNA-targeted enzyme called Cas13, instead of the usual DNA-binding Cas9. With the help of a sequence-specific guide RNA molecule, they successfully corrected disease-causing mutations 23–35% of the time, with low incidences of off-target activity.

In the base-editing method pioneered by Liu’s team last year, the researchers engineered a naturally occurring enzyme and tethered it to a dud Cas9, which allowed them to convert C to T. But there is no equivalent enzyme found in nature for the opposite conversion in DNA. So the researchers started with an RNA-editing enzyme similar to the one Zhang’s group used.

The team guided the evolution of bacterial cells through seven generations, and used some protein engineering in the lab, to produce an enzyme that would recognize and manipulate DNA. The enzyme was able to rearrange atoms in adenine to change it into an inosine, which the cell reads as a guanine. The system then tricked the cell into inserting a cytosine into the unmodified DNA strand (see ‘Changing bases’). 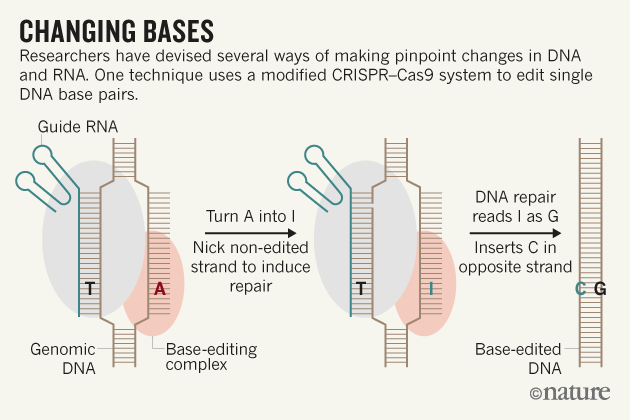 “It represents a heroic effort,” says Dana Carroll, a genome-engineering researcher at the University of Utah in Salt Lake City, noting that the directed-evolution approach was something of a shot in the dark. “I wouldn’t have had the guts to try what they did,” Carroll says. “My hat’s off to David Liu.”

The ability to make four types of single-base conversion — A to G, G to A, C to T and T to C — “will be extremely valuable for precise therapeutic and agronomic editing”, says Caixia Gao, a plant geneticist at the Chinese Academy of Sciences’ Institute of Genetics and Developmental Biology in Beijing.

It could also prove useful in drug discovery and for DNA-based data storage, says Marcello Maresca, a gene-editing researcher at AstraZeneca in Gothenburg, Sweden.

The development of any other base editors will require enzymes that do not occur in nature, even for conversions in RNA. But that kind of obstacle has not stopped Liu before. “We’ll keep trying until the community has developed all possible base editors,” he says.