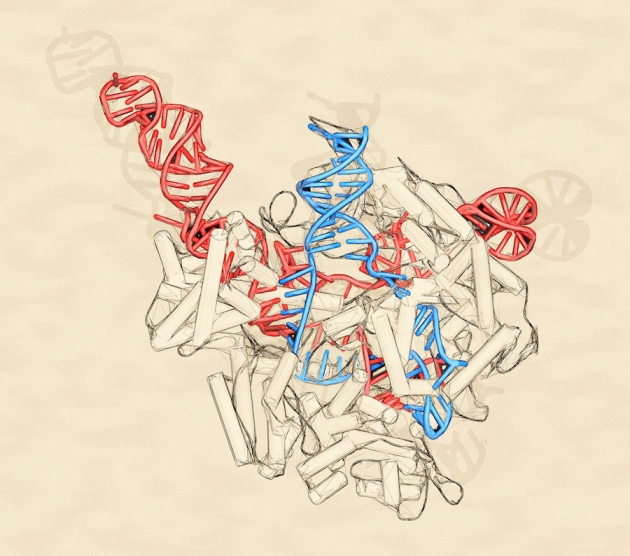 The CRISPR-Cas9 gene-editing complex, here shown editing DNA (in blue), has been modified to target RNA.

Researchers who discovered a molecular “scissors” for snipping genes have now developed a similar approach for targeting and cutting RNA. The new cutting tool should help researchers better understand RNA’s role in cells and diseases, and some believe it could one day be useful in treatments for illnesses from Huntington’s to heart disease.

To develop the “blades” for the process, researchers led by Feng Zhang at the Broad Institute used CRISPR (clustered regularly interspaced short palindromic repeats)—a system that bacteria evolved to fight off pathogens. CRISPR has previously been used to edit DNA but had been theorized to work on RNA as well.

The new findings, reported Thursday in Science1, came from systematically exploring different aspects of that natural defense system that protects bacteria—and may eventually be put to use helping people. “Nature has already invented all these really interesting mechanisms,” Zhang says, comparing himself with a treasure hunter. “We’re just trying to play with that and learn how they work…then turn them into tools that will be useful to us.”

Zhang says the new paper will not affect an ongoing patent dispute over who owns rights to the gene-editing approach known as CRISPR–Cas9. His team was the first to use CRISPR–Cas9 in mammalian cells. Another team—led by Jennifer Doudna, at the University of California, Berkeley, and French researcher Emmanuelle Charpentier—was first to publish on CRISPR–Cas9, showing its activity in bacteria.

Ironically, Doudna was a co-author on a March paper in Cell that used CRISPR–Cas9 to cut RNA in mammalian cells whereas Zhang’s new paper focuses on bacteria2. The two RNA manipulation methods may be complementary ways to approach the same ends or one may turn out to be more efficient than the other. In interviews this week each group praised the other’s work while touting the advantages of their own respective approaches.

Zhang says his new method—using the enzyme C2c2 to target RNA—relies on an existing natural system and therefore may be more effective than an approach that requires more manipulation. Gene Yeo, senior author on the Cell paper, says he has collaborated with both Doudna and Zhang, and described the new paper as a continuation of the kind of “friendly competition” that drives science. “There’s always a bit of a race between a lot of the groups, including mine,” he says. “I think scientific competition is good. People tend to push the boundaries more.”

Although Yeo pointed out that the C2c2 system has not yet been shown to work in mammalian cells, Zhang says unpublished results make him optimistic that it will.

Both RNA-targeting approaches have a long way to go before they could be tested in people—but the promise is there, says Yeo, a professor of cellular and molecular medicine at the University of California, San Diego. Targeting RNA may also offer new insights into how changes in RNA lead to changes in biology and the development of disease. “I think we’ll see an avalanche of these tools that will enable us to monitor and study RNA,” Yeo says. “This helps us think about RNA as not just an intermediate molecule between DNA and protein,” but as a therapeutic tool for treating diseases and problems of development.

Genes consist of double-stranded DNA, which makes single-stranded RNA—which in turn makes the proteins needed for life. Many diseases result from too much or too little protein. Theoretically, acting on the RNA could push those protein levels up or down, thereby offering treatments.

Manipulating RNA poses fewer ethical concerns than tinkering with the underlying DNA, although gene editing will remain a better approach for treating some diseases. “The problem with DNA editing is that it’s permanent,” Yeo says. “That could be good, but what if you make a mistake?” In some cases, such as with brain cells, DNA repair mechanisms are so strong that it may be more effective to act on the RNA rather than cutting the DNA, says Yeo, who has started a company that’s still in stealth mode to begin looking at treating diseases with this approach.

The Science paper reports that C2c2 could also be used to add fluorescent tags to RNA as a way to track and better understand its activities.

Zhang says he has long been interested in developing systems to target RNA. His team decided to survey the different kinds of CRISPR systems to figure out their functions. C2c2 turned out to be an RNA-targeting system, according to the new study, which includes researchers from the National Institutes of Health, Rutgers University and the Skolkovo Institute of Science and Technology in Russia, in addition to Harvard University and Massachusetts Institute of Technology. Like the Cas9 system that targets specific DNA, C2c2 can be aimed directly at desired RNA sequences, with seemingly few off-target effects. “The reason that it has evolved is to be able to use RNA guides to target RNA,” Zhang says.

His colleague, Eugene Koonin, a co-author on the new paper, puts it more poetically: “Evolution of life to a very large extent is a story of host–parasite interactions,” says Koonin, an expert in evolutionary genomics at the National Center for Biotechnology Information. “As we explore this arms race between host and parasite, we discover more and more intricate, novel ways in which cellular organisms cope with parasites and parasites counteract.”