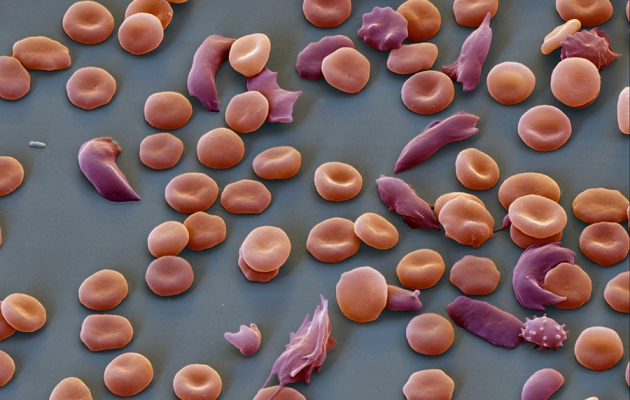 Abnormally shaped red blood cells (dark red) are one of the hallmarks of sickle-cell anaemia.

A mutation in a single DNA letter causes a painful and debilitating disease known as sickle-cell anaemia. Researchers have wrestled with this illness for more than 65 years, and have now added CRISPR–Cas9 gene editing to their armoury.

In a paper published 12 October in Science Translational Medicine1, researchers reported some success in correcting the mutation in mice, though they concede that human applications are still years away. The efficiency of the process is also slightly too low for practical use, cautions author Jacob Corn, a biochemist at the University of California, Berkeley.

About 250,000 children around the world are born with sickle-cell anaemia each year. It is caused by a mutation that affects the shape of the oxygen-carrying protein haemoglobin in red blood cells. The result can be clogged blood vessels that block oxygen delivery to tissues and cause excrutiating pain.

On paper, curing the disease seems almost straightforward: rewrite the mutated sequence in the blood-generating stem cells of the bone marrow so that it's normal, and a patient would, in theory, be free of the illness.

“It’s a single base change,” says Stuart Orkin, who studies blood diseases at the Dana-Farber Cancer Institute and the Boston Children’s Hospital in Massachusetts. “You’d think this would be the poster child of gene correction.”

But companies and academics alike have struggled to make progress, and even CRISPR–Cas9, for all of its ease and utility, is not yet up to the task.

Researchers can target the Cas9 enzyme — or other gene-editing enzymes — to cut specific sites of the genome, but what happens next depends on the natural DNA-repair processes in the cell. Most often, that repair causes small DNA deletions. A separate repair process inserts a new sequence at the cut site. But that correction occurs with vanishing frequency in the sleepy, infrequently dividing stem cells of the bone marrow that would be the target of a sickle-cell therapy.

Corn and his colleagues found a way to make the modification more efficient. They used a short DNA strand carrying the corrected sequence of the sickle-cell gene and engineered it to bind to the DNA strand left dangling after the Cas9 enzyme cuts. When used in cells taken from human sickle-cell patients, the technique increased the efficiency with which they could repair the defective genes by up to 25%.

The team then introduced these edited cells into lab mice. There, the efficiency of their technique plummeted: cells with a DNA deletion seemed to proliferate better in mice than cells with the corrected form of the gene. In mice, only up to 5% of the transplanted, edited cells produced the normal form of haemoglobin.

This is right at the threshold of what might be required to alleviate patients’ distress, says Corn. He adds that some physicians who have seen his data said they would be willing to try the approach in clinical trials. But Corn argues that it would be best to improve efficiency before it is deployed in people.

The refined technique will be a boon for researchers looking at other applications of gene editing, says Michael Holmes, vice-president of research at Sangamo Biosciences in Richmond, California. But it also highlights another problem: the attempts at gene editing leave plenty of genes with a deletion where the Cas9 enzyme cut. Some of those deletions could result in abnormal haemoglobin production — causing another serious condition called β-thalassaemia.

Sangamo also ran up against this problem, Holmes says, and decided to try a different approach. The company, and several others in the field, are using gene editing to disrupt expression of a gene that suppress the production of fetal-haemoglobin: a form of haemaglobin that is expressed in the developing fetus and resists sickling. Boosting the production of fetal-haemoglobin could thereby reduce the amount of sickle-shaped haemoglobin in adults.

The latest results with CRISPR–Cas9 support the idea that targeting fetal haemoglobin may still be the safer appraoch, says Holmes. “There's still a long way to go towards finding ways to safely correct the gene.”