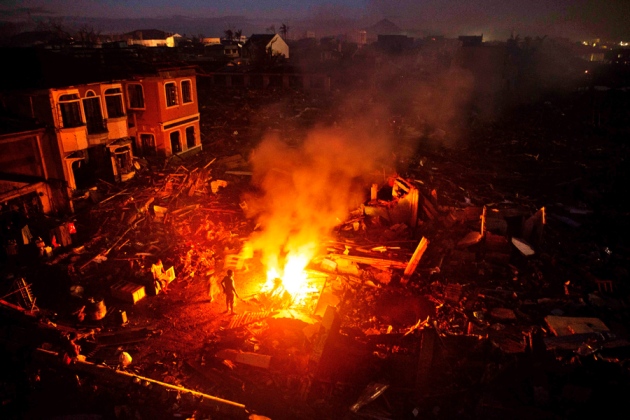 Residents of Tacloban in the Philippines burn scrap wood in the aftermath of Typhoon Haiyan.

When Typhoon Haiyan barrelled into the Philippines on 8 November 2013, more than 1,600 volunteers leapt to their laptops to make 4.5 million edits to OpenStreetMap, an online, open global map. Working from satellite imagery, the volunteers created maps for stricken areas of the islands, and tagged buildings that seemed to have been damaged or destroyed. The maps were used to help aid workers to navigate the terrain, and the damage assessments were passed to relief organizations to direct aid workers and supplies.

Although the maps proved invaluable, the damage assessments were poor. “The results were terrible,” Dale Kunce, a geospatial engineer at the American Red Cross, told the International Conference of Crisis Mappers in New York City on the anniversary of Haiyan’s landfall. Crisis mappers see the experience not as a setback but as a valuable lesson. The take-home message, Kunce said, “is that if we’d done a couple things differently, the quality would have been much higher”.

The effectiveness of compiling geographic information about disasters online was first demonstrated on a large scale after the Haiti earthquake in January 2010. An informal network of volunteers began noting the status of buildings and infrastructure on an online map using news and social-media reports, and later incorporated text messages from survivors on their status and needs. Craig Fugate, head of the US Federal Emergency Management Agency, called the Haiti effort “the most comprehensive and up-to-date map available to the humanitarian community”.

But an analysis of the Typhoon Haiyan data in April by the American Red Cross and the Reach Initiative, a humanitarian agency based in Geneva, Switzerland, made a disheartening finding: satellite judgements by the Humanitarian OpenStreetMap Team (HOT), an online group of volunteer crisis mappers, matched a later ground survey only 36% of the time. Volunteers tended to miss structural damage in most areas, but overestimated it in the densely populated city of Tacloban. The report concluded that current satellite imagery does not offer enough detail to allow relatively untrained volunteers to assess damage.

Now the community is developing better ways to assess and verify damage in real time. Some of the most promising advances are coming from collaborations with another crowdsourcing movement that has sprung up in the past few years: citizen science. This lets anyone with an Internet connection volunteer to do labour-intensive tasks requiring little or no expertise for academic research projects.

The Haiyan report identified several ways in which online crowdsourcing platforms could make satellite assessments more dependable: by giving volunteers better guidance on what features to look for, providing pre-disaster imagery to compare against and improving assessments of volunteers’ accuracy.

“It brings us to the next level — and where we should be.”

When astronomer Brooke Simmons of the University of Oxford, UK, read the report, she realized that she already knew how to do those things — in a different setting. She studies the evolution of galaxies with the Zooniverse, the world’s largest citizen-science project, in which 1.2 million users pore over old ships’ logs to extract weather data, scan astronomical images for interesting objects and transcribe scraps of ancient texts.

“The Zooniverse has been doing this longer than anyone else,” says Patrick Meier of the Qatar Computing Research Institute in Doha, who leads the Standby Task Force, a crisis-mapping team that tracks social-media posts, and who has admired the Zooniverse for years.

Meier and Simmons hope to launch a pilot study within weeks using archival images from Tacloban. With the help of HOT leader Kate Chapman, they have secured the release of post-Haiyan images taken with drones made by CorePhil of Quezon City in the Philippines, as well as high-resolution pre-disaster satellite images from DigitalGlobe of Longmont, Colorado. Those images will be degraded in steps to simulate the more-limited resolution of other satellites, and volunteers will be asked to use them to identify damaged structures. The goal is to determine what damage can be seen at what resolution. Meier hopes that up to 100,000 Zooniverse users will participate.

Simmons is also developing ways to statistically quantify how confident relief workers can be in a building’s damage ranking, weighting users’ input on the basis of how accurate they have been in the past. “It brings us to the next level — and where we should be,” says Meier.

Meier and Simmons hope that, by spring 2015, a Zooniverse portal will be ready to deal with real-world crises, providing aid workers with an interactive map that conveys not just the level of damage, but also the confidence in those assessments.

Imagery will be provided for free by Planet Labs in San Francisco, California, which is launching small satellites to image the entire Earth every 24 hours at a resolution of 3–5 metres. Although that is less detailed than imagery from some commercial providers, the comprehensive coverage will ensure that pre- and post-crisis imagery is available wherever the next major disaster strikes.