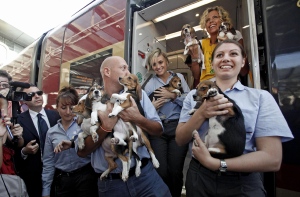 Many of the beagle puppies from the Green Hill breeding facility have been re-housed and will not be allowed to return to the facility.

One of the largest suppliers of dogs for drug research in Europe could struggle to survive after an Italian court ordered that it be closed temporarily.

On 18 July, the court judged that allegations of maltreatment of dogs at the Green Hill facility in Montichiari, Italy, warranted further investigation. The allegations were made by two animal-rights groups: the Anti-Vivisection League (LAV) and Legambiente, both based in Rome. Immediately after the decision, inspectors accompanied by police went to the facility, which belongs to Marshall BioResources, based in North Rose, New York, and confiscated computers and other items for analysis.

The court also gave the animal-rights groups responsibility for the care of the 2,500 beagles in the facility. The groups began distributing the dogs to foster homes on 27 July. Around 1,000 are now in temporary homes, pending the outcome of the investigation expected this week. The dogs would not be allowed to return to Green Hill, because they could bring pathogens into the facility. Many think that the loss of the dogs will threaten the survival of the company.

Roughly half of the beagles are used in mandatory safety testing of drugs. Magda Chlebus, head of science policy at the European Federation of Pharmaceutical Industries and Associations in Brussels, says that the closure will cause a problem for drug developers because the facility supplies many of the dogs used in Europe, and other dog-breeding facilities could be discouraged from supplying animals to researchers.

It means “a delay in better treatments for patients, and ironically, potentially a negative animal-welfare impact should the studies be conducted in countries or regions with less stringent legislation than Europe”, Chlebus says.

Green Hill is inspected regularly by Italian authorities in accordance with legal requirements, and has not had any problems, says Andy Smith, vice-president of Marshall BioResources. “But in the past year, the inspections have been stepped up to almost weekly,” he says. “It seems to be a political campaign to get us closed down.” The facility did not respond to Nature's enquiries.

Roberto Caminiti, a physiologist at the University of Rome 'La Sapienza' and chairman of the Committee on Animals in Research for the Federation of European Neuroscience Societies, says that the pressure on Green Hill is probably connected to attempts by some parliamentarians to introduce legislation that is more restrictive than the European Union directive on animal research and to ban the breeding of cats and dogs for research purposes in Italy (see 'Italian scientists fight tightened rules on animal testing').

Green Hill has partially won its appeal. On 3 August the court ruled that staff could access the facility's buildings. But it maintained the seizure order on the animals and activists removed more dogs during the day. The court said it was concerned that some puppies came down with diarrhoea and respiratory conditions. Andy Smith, vice-president of Marshall Biosciences which owns Green Hill, says the conditions occurred when the company was banned from caring for the animals.

An earlier version of this story incorrectly stated that the EU directive on animal research bans breeding of primates.