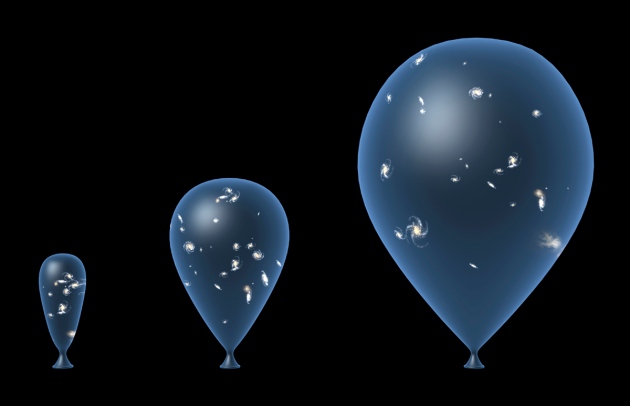 The conventional model of cosmology is that most galaxies recede from one another as space itself inflates like the surface of a balloon — which would explain why other galaxies appear redshifted from our own galaxy's point of view. But one cosmologist has a different interpretation of that redshift.

It started with a bang, and has been expanding ever since. For nearly a century, this has been the standard view of the Universe. Now one cosmologist is proposing a radically different interpretation of events — in which the Universe is not expanding at all.

In a paper posted on the arXiv preprint server1, Christof Wetterich, a theoretical physicist at the University of Heidelberg in Germany, has devised a different cosmology in which the Universe is not expanding but the mass of everything has been increasing. Such an interpretation could help physicists to understand problematic issues such as the so-called singularity present at the Big Bang, he says.

Although the paper has yet to be peer-reviewed, none of the experts contacted by Nature dismissed it as obviously wrong, and some of them found the idea worth pursuing. “I think it’s fascinating to explore this alternative representation,” says Hongsheng Zhao, a cosmologist at the University of St Andrews, UK. “His treatment seems rigorous enough to be entertained.”

Astronomers measure whether objects are moving away from or towards Earth by analysing the light that their atoms emit or absorb, which comes in characteristic colours, or frequencies. When matter is moving away from us, these frequencies appear shifted towards the red, or lower-frequency, part of the spectrum, in the same way that we hear the pitch of an ambulance siren drop as it speeds past.

In the 1920s, astronomers including Georges Lemaître and Edwin Hubble found that most galaxies exhibit such a redshift — and that the redshift was greater for more distant galaxies. From these observations, they deduced that the Universe must be expanding.

But, as Wetterich points out, the characteristic light emitted by atoms is also governed by the masses of the atoms' elementary particles, and in particular of their electrons. If an atom were to grow in mass, the photons it emits would become more energetic. Because higher energies correspond to higher frequencies, the emission and absorption frequencies would move towards the blue part of the spectrum. Conversely, if the particles were to become lighter, the frequencies would become redshifted.

Because the speed of light is finite, when we look at distant galaxies we are looking backwards in time — seeing them as they would have been when they emitted the light that we observe. If all masses were once lower, and had been constantly increasing, the colours of old galaxies would look redshifted in comparison to current frequencies, and the amount of redshift would be proportionate to their distances from Earth. Thus, the redshift would make galaxies seem to be receding even if they were not.

Work through the maths in this alternative interpretation of redshift, and all of cosmology looks very different. The Universe still expands rapidly during a short-lived period known as inflation. But prior to inflation, according to Wetterich, the Big Bang no longer contains a 'singularity' where the density of the Universe would be infinite. Instead, the Big Bang stretches out in the past over an essentially infinite period of time. And the current cosmos could be static, or even beginning to contract.

The idea may be plausible, but it comes with a big problem: it can't be tested. Mass is what’s known as a dimensional quantity, and can be measured only relative to something else. For instance, every mass on Earth is ultimately determined relative to a kilogram standard that sits in a vault on the outskirts of Paris, at the International Bureau of Weights and Measures. If the mass of everything — including the official kilogramme — has been growing proportionally over time, there could be no way to find out.

For Wetterich, the lack of an experimental test misses the point. He says that his interpretation could be useful for thinking about different cosmological models, in the same way that physicists use different interpretations of quantum mechanics that are all mathematically consistent. In particular, Wetterich says, the lack of a Big Bang singularity is a major advantage.

He will have a hard time winning everyone over to his interpretation. “I remain to be convinced about the advantage, or novelty, of this picture,” says Niayesh Afshordi, an astrophysicist at the Perimeter Institute in Waterloo, Canada. According to Afshordi, cosmologists envisage the Universe as expanding only because it is the most convenient interpretation of galaxies' redshift.

Others say that Wetterich’s interpretation could help to keep cosmologists from becoming entrenched in one way of thinking. “The field of cosmology these days is converging on a standard model, centred around inflation and the Big Bang,” says physicist Arjun Berera at the University of Edinburgh, UK. “This is why it’s as important as ever, before we get too comfortable, to see if there are alternative explanations consistent with all known observation.”