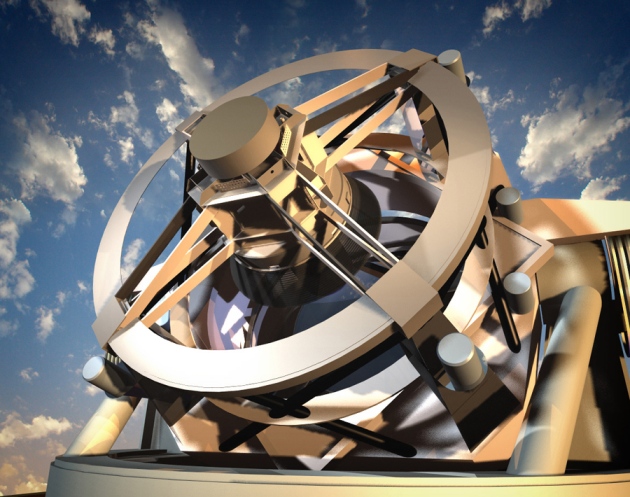 The past few years have not been the best of times for building observatories. But in a world of budget constraints and schedule delays, the Large Synoptic Survey Telescope (LSST) is bucking the trend. The US-led project to build the world’s most powerful sky-mapping machine has nailed down inter­national partnerships to fund project operations, which are intended to start in 2022. The commitments could help it to secure a final blessing from a key group: the board of the US National Science Foundation (NSF), which met this week in Washington DC.

From its perch atop Cerro Pachón in Chile, the proposed 8.36-metre telescope would map the entire southern sky every three nights, generating a wealth of data on transient events such as supernovae and passing asteroids, and helping to discern the nature of dark energy, which is accelerating the expansion of the Universe. Massive computing centres would store the data and allow astronomers around the world to access them remotely. Snapshots of portions of the sky would be released every minute, and more detailed maps would come out once a year.

The project reflects a shift in astronomy from the study of individual objects to surveys and big data. It has wide appeal: in 2010, it came out top of a decadal survey of US funding priorities in astronomy and astrophysics. The telescope is expected to produce many more data than the Sloan Digital Sky Survey, a highly productive northern survey. In less than two nights, the LSST will cover the same amount of sky as the Sloan managed in 8 years.

Organizers are confident that they will secure construction money. Aided by a total of US$30 million from philanthropists Bill Gates and Charles Simonyi, the project has already cast its primary mirror. The US Department of Energy (DOE) has committed $160 million towards a 3.2-gigapixel camera, and the NSF expects to be able to provide $466 million to build the rest of the telescope.

But the foundation is concerned about the high cost of operating the data centres that will deal with the telescope’s output of 13 terabytes of data per night. Anthony Tyson, a physicist at the University of California, Davis, and director of the LSST project, says that in 2011, the NSF told him to shift the emphasis of his international fund-raising efforts from construction to operations.

The project is pioneering an innovative partnership model. In most astronomical consortia, members get a share of the telescope time that is proportional to the money they have put in. But with the LSST, institutions buy access to data: $20,000 in annual support secures access for a principal investigator, two postdoctoral researchers and unlimited graduate students. “It’s a good deal, right?” says Sidney Wolff, president of the non-profit LSST Corporation in Tucson, Arizona. 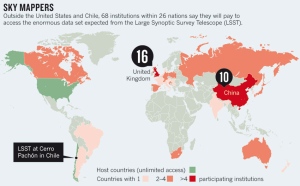 Tyson found that recruiting partners was easy. He says that word would get out among astronomers in a country, and multiple institutions would soon be asking to join. “It mushroomed,” he says. “It was limited purely by the number of hours I could stay awake.” By the end of April this year, he had met his goal: 68 letters of intent from institutions across 26 nations, enough to cover nearly one-third of the annual operations costs of $37 million (see ‘Sky mappers’). However, the first round of fund-raising has been closed to new partners, and Tyson says that some astronomers in countries such as France are disappointed that they missed out. (Astronomers in the United States and the project’s host country, Chile, will have free, unlimited access to the data.)

The international support has reassured the NSF: as Nature went to press, the board was expected to approve the project on 18 July. Approval would allow the NSF to ask Congress for construction funding from 2014. “We’re fairly confident,” says Steven Kahn, a physicist at SLAC National Accelerator Laboratory in Menlo Park, California, and deputy director of the LSST project. “We’ve had lots of hurdles put in our path, and we’ve jumped over them.”

But the project could still be endangered if the NSF and the DOE don’t get along. In 2010, the foundation pulled out of a plan to build an underground laboratory for DOE experiments in South Dakota. “There’s still a lot of nervousness about interagency collaboration,” says David MacFarlane, an astrophysicist at SLAC and chairman of the board of the LSST Corporation. But the agencies have drawn up a formal agreement that could help to reassure the NSF board that the collaboration is on solid ground.

Andy Woodsworth, a physicist in Victoria, Canada, who at the end of May chaired an external review of the project, says that the LSST has already found its footing. “The time has come for this sort of survey,” he says.