It's a cosmic whodunnit that has been puzzling astronomers for 100 years. What is shooting protons through our Galaxy at energies up to thousands of times greater than those in the Large Hadron Collider at CERN near Geneva, the most powerful particle accelerator on Earth? Two new sets of observations again implicate the leading suspects: supernova remnants, the expanding shrapnel from stellar explosions. But they may not be the only culprits.

Protons make up about 90% of the high-energy charged particles, or cosmic rays, that constantly rain down on Earth. But directly tracing their origin has been impossible because magnetic fields threading through the Galaxy push the charged particles off their original paths.

Nevertheless, astronomers have long assumed that supernova remnants act as the Galaxy's particle accelerators. That is because the expanding stellar debris creates a shockwave when it slams into the surrounding gas, compressing and enhancing any magnetic fields present. Charged particles traveling through the shock front can get accelerated, and some also get deflected back by the magnetic fields. Some particles may travel back and forth across the front — and gain energy — for thousands of years before escaping as cosmic rays.

Indeed, radiation at a range of wavelengths reveals unequivocally that electrons get such a boost inside supernova remnants — they produce telltale radiation when they move through a magnetic field. Various lines of evidence hint that protons do the same, as expected theoretically. But those observations could have alternative interpretations, leaving the case for the remnants as proton accelerators stubbornly open.

The two new studies — at γ-ray and visible wavelengths — may close the case beyond reasonable doubt. "This is as close as you can get to a smoking gun," says Francis Halzen, a particle astrophysicist at the University of Wisconsin-Madison, who is not involved with either study. 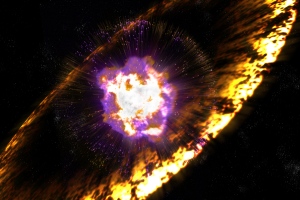 The shockwaves of supernova explosions accelerate charged particles such as protons, some of which end up raining on Earth as cosmic rays.

In one study, scientists used a technique for detecting the presence of high-energy protons in supernova remnants indirectly. When high-energy protons smash into other particles of matter — whether in the Earth's atmosphere or in interstellar space — the debris of the collisions contains short-lived subatomic particles called neutral pions. Each pion can in turn decay into two γ-rays of characteristic energies.

To search for these telltale γ-rays, the researchers used NASA's Fermi space telescope, and focused on two supernova remnants, called IC 443 and W44, lying within 3,000 parsecs (around 10,000 light years) of Earth. They found an abundance of γ-ray photons in the range of energies expected from pion decay1.

The results were in line with previous observations at a smaller range of wavelengths by Italy's AGILE spacecraft2. They strongly suggest that protons are accelerated in the remnants, says Stefan Funk of Stanford University in California, a co-author on the study. Electrons can also produce γ-rays when they hit matter or photons, but explaining the observed γ-ray distribution invoking only electrons would involve "extreme fine-tuning in two remnants", he says. "I think it's extremely unlikely."

In the other study, Sladjana Nikolić at the Max Planck Institute for Astronomy in Heidelberg, Germany, and her colleagues studied the spectrum of visible light emitted by hydrogen atoms in the shock region of a supernova remnant called 1006.

The spectrum reveals the atoms' speeds, and the researchers found that they could not explain its shape if matter simply crashed together in the shock3. They say that some of the hydrogen atoms must have begun as solitary protons that were boosted to high energies by the shockwave; later, the accelerated protons grabbed electrons from neighbouring hydrogen atoms to produce the observed radiation. "We don't expect to see many particles with velocities higher than a certain level in a gas of a certain temperature," says team member John Hughes, an astrophysicist at Rutgers University in Piscataway, New Jersey. "But when you have cosmic-ray acceleration, then in fact you can get particles with very, very high velocities."

Just how energetic can they get? Researchers will attempt to find out by looking for the sources of the highest-energy cosmic rays that originate in our Galaxy, which reach energies of 1 billion MeV (1015 eV). The Fermi telescope is unlikely to be able to track these objects down because it looks at one relatively small portion of the sky at a time, and such cosmic rays — and their associated γ-rays — are rare. But ground-based detectors that look for signs of energetic γ-rays slamming into Earth's atmosphere or neutrinos produced by Galactic cosmic rays stand a better chance. Researchers also hope to study supernova remnants of different ages to see whether their efficiency at accelerating cosmic rays changes over time. "We really want to start to get at the details of how the protons are accelerated," says Funk.

There may be even more surprises in store. In 2011, researchers led by Piergiorgio Picozza of the University of Rome Tor Vergata in Italy reported cosmic-ray observations by a satellite called PAMELA that could not be explained by a simple model of a supernova remnant4. Rather than falling in number at higher energies as expected, the number of cosmic rays rose. To explain the observation "we need more complex processes of acceleration and propagation", says Picozza.

He says that other astronomical objects, such as white-dwarf stars that undergo explosions called novas, might also be able to accelerate cosmic rays, and that some cosmic rays might get energy boosts from several different objects throughout their life as they travel through the Galaxy. "There is more to this story," agrees Halzen.