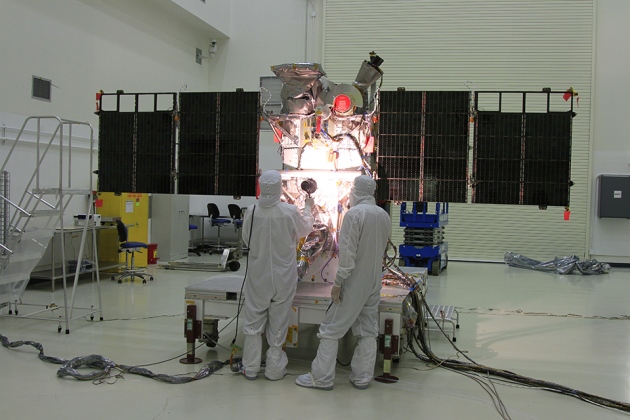 DSCOVR monitors space weather from a perch about 1.5 million kilometres from Earth.

A US space-weather satellite that is supposed to alert Earth to incoming solar storms has temporarily dropped offline five times in the year since it became operational. Its onboard computer may be experiencing hiccups caused unexpectedly by galactic cosmic rays.

The Deep Space Climate Observatory (DSCOVR) went out of action most recently on 11 October. In each case, it unexpectedly entered a ‘safe hold’ in which scientific data stopped flowing and engineers had to scramble to try to recover the spacecraft. In total, DSCOVR’s space-weather forecasting instruments have been offline for more than 42 hours since 28 October 2015, when the US National Oceanic and Atmospheric Administration (NOAA) took the spacecraft over from NASA, which built and launched it.

Each outage lasts for only a few hours, and the total downtime amounts to 0.48% of its time in space — well below NOAA’s requirement that the spacecraft operate at least 96% of the time. The 11 October outage did not significantly affect predictions of a minor geomagnetic storm that arrived a few days later, says Robert Rutledge, head of the forecast office at NOAA’s Space Weather Prediction Center in Boulder, Colorado.

But the outages mean that DSCOVR could be offline when a major solar storm erupts, leaving Earth essentially blind to the incoming onslaught. ”Are they problematic? Yes,” says Douglas Biesecker, a solar physicist at the Boulder centre.

Other heliophysics spacecraft monitor solar eruptions, but DSCOVR delivers unique information from its location at the gravitationally stable L1 point, about 1.5 million kilometres from Earth in the direction of the Sun. The spacecraft's instruments directly measure the speed, magnetic field and other properties of the charged particles streaming off the Sun. Those data translate into better forecasts of what could happen when a solar storm hits Earth, such as disruptions to satellite electronics or fluctuations in electrical power grids.

DSCOVR is NOAA’s main tool for forecasting space weather, but it began life as Triana, a NASA Earth-observing spacecraft built in the late 1990s to gaze constantly at the planet. A pet project of Al Gore, then the US vice-president, Triana was shelved in 2001, then repurposed in 2008 for NOAA’s space-weather needs. “It was never designed from the beginning to be a space-weather satellite,” says Steven Clarke, head of NASA’s heliophysics division in Washington DC.

The satellite launched on 11 February 2015 and experienced its first outage four months later, when its onboard computer spontaneously rebooted. On average, the safe holds happen every 74 days, but two came just eight days apart. They are not correlated with solar storms.

A NASA internal review board convened to study the problem could not definitively pinpoint the cause, but concluded that it was most likely to be galactic cosmic rays randomly striking the spacecraft, causing high-energy ionization that reboots the computer. The computer, which was built by NASA in 2000, contains a processor card that is similar to those flying aboard many other missions and is meant to withstand the radiation hazards of deep space.

NOAA does have a back-up data stream, from the Advanced Composition Explorer (ACE) spacecraft that is also orbiting the L1 point. That was the primary source of solar-wind data until NOAA forecasters switched to DSCOVR in July. But ACE is 19 years old, and intense solar storms can swamp its forecasting instruments, causing problems when data are needed the most.

NOAA has requested an extra US$1.5 million from Congress to improve how it handles DSCOVR data, including its responses to the outages. The satellite is supposed to last until 2022, when a follow-up mission is slated for launch. Historically, NOAA has cobbled together its space-weather observations where and when it could, but the US government is starting to demand a more coherent approach. On 13 October, President Barack Obama signed an executive order that, among other things, requires NOAA to “ensure the continuous improvement of operational space weather services”.