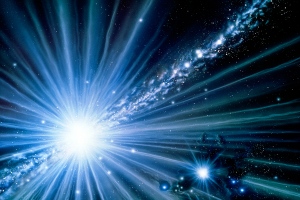 γ-ray bursts provide a way to study the 'lumpiness' of space-time predicted by some quantum theories.

A race between two energetic photons that began more than 7 billion years ago and spanned half the cosmos has ended in a virtual dead heat. The result, if it stands up to scrutiny, would tighten the limits, suggested by some theories, on how ‘lumpy’ space-time can be.

The work, to be presented on 11 January at the 219th meeting of the American Astronomical Society in Austin, Texas, by Robert Nemiroff of the Michigan Technological University in Houghton and his colleagues1, relies on an analysis of a short-lived, powerful stellar explosion known as a γ-ray burst that was recorded by NASA's Fermi Gamma-ray Space Telescope in May 2009 and dubbed GRB 090510A. The study focused on two photons, one with an energy of 25 gigaelectronvolts (GeV) and another of about 1.5 GeV, which were separated by just 0.00136 seconds.

Assuming the photons were emitted at the same time, this would mean the speed of light can not vary by more than seven parts in one billion trillion, a limit similar to that found using lower-energy photons from another γ-ray burst recorded a decade ago by astronomer Brad Schaefer, then at Yale University in New Haven Connecticut, the team reports2.

In some theories of quantum gravity, space-time isn't smoothly continuous, but is composed of fundamental units or grains less than a trillionth of a trillionth the diameter of a hydrogen atom — 10–35 metres, also known as the Planck length. In a simplified explanation, photons with the highest energies have wavelengths comparable to the Planck length, so are more likely to interact with and be slowed down by these 'lumps'. Although the slowing effect is minuscule, the difference is amplified as the particles journey for billions of years across the vast distances of the cosmos.

Nemiroff's result places a more stringent constraint on the variation of the speed of light with energy, which in turn determines the size of the lumps in space-time. The team's findings indicate that the graininess of space-time only becomes important on scales of about 1/500 the Planck length. That could begin to put serious limitations on theories of quantum gravity, some of which require that the effect be seen at larger scales.

There is, however, a 1% chance that the photons were not emitted at exactly the same time, and that uncertainty exceeds the margin of error physicists require for proof, acknowledges Nemiroff. Another distant γ-ray burst that has a greater number of energetic photons would make the result more certain, Nemiroff says.

In a 2009 analysis of the same γ-ray burst, another team, led by Vlasios Vasileiou of the CNRS basic research institution and the University of Montpellier II in France, found that the difference in arrival time between a roughly 31-GeV photon and photons with energies as much as a million times smaller was about nine-tenths of a second. This longer time interval would allow space-time to be lumpy on a scale roughly equal to the Planck length. And these data have greater statistical significance, in part because the team analysed them in two independent ways3, 4.

"Which paper puts the tightest bounds [on the graininess of space-time] depends on the significance you ask for," says theoretical physicist Sabine Hossenfelder of the Nordic Institute for Theoretical Physics in Stockholm, Sweden. The older result is not much of a constraint but is on firmer statistical footing, she notes.

The two teams used different methods to study the burst. Vasileiou focused on the broader, overall structure of the burst, while Nemiroff looked at the detailed microstructure, and studied energetic photons from one of three pulses within the burst. That change in focus allowed Nemiroff to probe smaller effects, but using fewer photons meant the statistical significance was lower, notes Vasileiou.

"I think that the new method that Nemiroff and his colleagues have used to extract constraints from the data will be very useful and eventually provide tight constraints, even if there presently aren’t enough data for statistically highly significant results," says Hossenfelder.

She adds that Nemiroff's limits on the variability of the speed of light probably have little bearing on the result of the recent OPERA experiment at CERN, Europe’s particle-physics laboratory near Geneva, Switzerland, which found neutrinos may be moving faster than light5. The OPERA result is a large-enough deviation from the speed of light that if it were caused by some facet of the universe, such as the graininess of space-time, slowing down high-energy particles, "we'd long before have seen it, not only in photons but also in neutrinos".