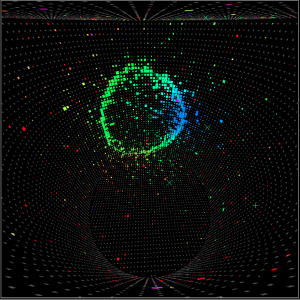 A computer reconstruction of a neutrino event in the cylindrically-shaped Super-Kamiokande detector. Each coloured dot represents a photomultiplier detecting light.

Neutrinos, some of the most abundant particles in the universe, are also among the most mysterious. We know they have mass but not how much. We know they come in at least three types, or 'flavours' — but there may be more. A new study found that a mismatch between observations of galaxy clusters and measurements of the cosmic background radiation could be explained if neutrinos are more massive than is usually thought. It also offers tantalizing hints that a fourth type of hitherto unseen neutrino exists.

The tension between galaxy clusters and the cosmic microwave background (CMB) has been a brewing problem, albeit one that might be resolved simply by getting better measurements in the coming years (see 'Missing galaxy mass found'). The background radiation shows the small density variations in the early universe that would eventually cause matter to clump in some places and form voids in others. We can see the end product of this clumping in the recent universe by observing the spread of galaxy clusters across space.

The best measurements of the cosmic background radiation came from the European Space Agency’s orbiting Planck telescope in March 2013. Galaxy-cluster measurements, on the other hand, come from various methods that include mapping the spread of mass across the universe by looking for the gravitational lensing, or warping of light, it causes. The two measurements, however, are inconsistent with one another. "We compare the universe at an early time to a later time, and we have a model that extrapolates between the two," says Richard Battye of the University of Manchester, UK, co-author of the new study1 published on 7 February in Physical Review Letters (PRL). "If you stick to the model that fits the CMB data, then number of clusters you find is a factor of two lower than you expect."

The discrepancy could be explained if neutrinos have hindered the process of galaxy cluster formation — a possibility if neutrinos have a large enough mass. At some point in the past, the universe is thought to have crossed an energy threshold that corresponded to the neutrino mass: When the universe was hot and dense in its early life, neutrinos would have been relativistic, moving at the speed of light. In this state they would not have clumped together under the force of their own gravitational attraction. After the universe cooled and crossed the energy threshold, however, neutrinos would have slowed down and started moving at sublight-speeds. Then they would finally begin to cluster along with the rest of the matter in the universe. "The number of galaxy clusters you would see in the universe is a function of neutrino mass," Battye explains. "The more massive they are, the larger contribution they make to the total matter density of the universe, and they suppress this cluster-formation process slightly."

Battye and his collaborator, Adam Moss of the University of Nottingham, UK, found that the number of clusters we see today can be explained if the three neutrino masses add up to about 0.32 electron volt (give or take 0.081), or about a third of a billionth the mass of a proton. Previous estimates had suggested only that the neutrino masses must add up to at least 0.06 electron volt. Such a large total mass would be surprising and "very interesting with lots of very positive consequences," says theoretical physicist André de Gouvêa of Northwestern University in Evanston, Illinois, who was not involved in the study. For instance, it would indicate that the three flavours of neutrino — electron, muon and tau — have almost exactly the same mass, which would be somewhat unexpected. This "would impact the way we try to understand the mechanism behind neutrino masses," de Gouvêa says.

Furthermore, Battye and Moss found evidence that a fourth, 'sterile' type of neutrino might exist. "The idea is very exciting," says physicist Joseph Formaggio of the Massachusetts Institute of Technology in Cambridge, also not part of the study. "Three neutrinos is what we expect. A fourth neutrino is throwing the book out the window — physics beyond what we call the Standard Model." The three known neutrinos have the bizarre ability to transform from one flavour to another. A sterile neutrino would not be able to switch flavours, and would interact even less with normal matter than the already reticent known flavours.

Theorists have long suggested sterile neutrinos might exist, but so far proof of them has been elusive. Hints at some particle accelerator experiments2 lately have begun to suggest they are out there, however. "What's really interesting is that the mass of this sterile neutrino, [according to Battye and Moss,] is consistent with what the other experiments see," Formaggio says. "I think people are starting to look at the data and say maybe there's something there." And coincidentally another study3 supporting the idea of a sterile neutrino as well as heavier neutrino masses was also published in the same issue of PRL. That work, led by Mark Wyman of the University of Chicago, also examined tensions between the Planck data and galaxy clusters and came to similar conclusions as Battye and Moss did.

For many years neutrinos were thought to be completely massless, but the discovery that they can swap flavours also proved that they have at least a little bit of mass. Each flavour’s state is thought to be a mixture of the three unknown neutrino masses — called mass 1, mass 2 and mass 3 for the time being — and this mixing is why any flavour has a chance of turning into one of the other flavours over time. The transformation is only possible if the mass states are different from one another, and such a difference is only possible if neutrinos' mass is nonzero, Formaggio explains.

Experiments aiming to catch neutrinos in the act of switching flavours could help pin down the differences between the neutrino masses and tell us which weighs more—the so-called neutrino-mass hierarchy. One such experiment, called NuMI Off-Axis νe Appearance (NOvA), measured its first neutrinos last week. The experiment creates a beam of neutrinos at the Fermi National Accelerator Laboratory (Fermilab) near Chicago and sends them to two detectors — one near Fermilab and another 800 kilometres away in Ash River, Minnesota. All of the particles start as muon neutrinos but some precious few arrive at the distant detector having turned into electron neutrinos, which create a different signature. The frequency at which this happens is related to the difference between electron and muon neutrinos' masses.

Another experiment based in Japan called the Japanese Tokai to Kamioka (T2K) project also looks for these transformations. The collaboration announced last week that it had observed a record total of 28 candidate mutations from muon into electron neutrinos, with only about five of the events predicted to be other processes masquerading as the real thing. It is the strongest evidence to date for this type of neutrino oscillation, although much more data will be needed to answer questions about neutrinos' masses. "It's sort of like a big mile marker in a long race," says Formaggio, who wrote an essay accompanying the publication of the result on 10 February in PRL. The two experiments are complementary, says NOvA deputy project leader Rick Tesarek. "There are some capabilities that NOvA has that T2K doesn’t have" and vice versa. The experiments use different detector technology that is sensitive to different effects, and the NOvA project has a longer distance between its neutrino beam and the far detectors.

As these experiments gather more data the secrets of neutrino masses may be revealed. The coming years should also clarify whether galaxy cluster measurements are truly incompatible with the cosmic background radiation data, and hence whether they point toward heavier neutrino masses and/or a sterile neutrino. "The measurements are improving all the time," Battye says. "I'd imagine in five years time we'd know hopefully whether this is right or not."