Look out Boston and San Francisco. These traditional hubs of innovation have a challenger in the shape of New York City, which has just signed off on a US$2-billion graduate science and engineering school to stimulate the region’s technology industry and inspire a flood of start-up companies.

After a year-long competition that brought in 7 proposals from 17 leading institutions around the world, mayor Michael Bloomberg’s team selected a bid from Cornell University and the Technion-Israel Institute of Technology in Haifa to build a new science campus on Roosevelt Island in New York's East River. The first phase of building is scheduled for completion by 2017, with the campus due to open its doors to 75 full-time faculty members and 300 graduate students. Yet enrolments could begin as soon as next September, with the school slated to kick off its first classes at a temporary off-site location. 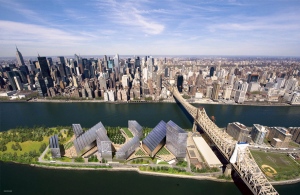 The graduate science campus will be built on Roosevelt Island in New York City and operated by Cornell University and the Technion-Israel Institute of Technology.

“Of all the applications we received, Cornell and Technion’s was far and away the boldest and most ambitious,” Bloomberg said at a press conference at the Weill Cornell Medical College in midtown Manhattan, just across the East River from Roosevelt Island. The new campus, he said, will be a “beehive of innovation and discovery”.

With $100 million in city funding for infrastructure upgrades and a $350-million donation to Cornell already in hand, work on the campus should begin apace, involving levelling of an old hospital and remediation of polluted land before the school's trapezoid glass buildings can be erected. The initial phase will draw in computer scientists, electrical engineers, economists and entrepreneurs, who will develop programmes around three multidisciplinary themes: healthier life, the built environment and connective media. Students will be able to work towards either a master's in applied sciences or a master's or PhD in traditional disciplines.

Over the next three decades, Cornell and Technion plan to expand the school to include 280 faculty and 2,500 graduate students, which will almost double the number of graduate engineering students in the city. The facility will offer incubator and spin-out space for start-up companies and a $150-million fund for start-ups that stay in the city for three years. Scientists and engineers at the campus will also work with mathematics and science teachers at local schools.

“I am excited for New York and I am excited for science,” says Jay Walker, a Cornell graduate and inventor who is chairman of Walker Digital, a privately owned research and development lab in Stamford, Connecticut. “You are a product of your environment, and New York as an environment is an extraordinary, challenging place to think differently, adapt quickly and be global.”

The press conference came one month earlier than expected and just three days after another front-runner, Stanford University in California, withdrew its application. Bloomberg said that the Stanford proposal “didn’t fit for the time being”, but believes that the university would still benefit from “having a branch in New York City”. Bloomberg and his team will continue to mull proposals from Carnegie Mellon University, Columbia University and New York University for other, more modest science and engineering campuses in Manhattan, Brooklyn and Harlem.

Back on Cornell’s home turf of Ithaca, some 350 kilometres away in upstate New York, faculty members were surprised by the sudden turn of events. “It’s been a big topic of conversation around the department,” says Cornell computer scientist David Bindel. One big question is how the school plans to get graduate students recruited and classes up and running by the September deadline. He speculates that some Ithaca-based faculty members could spend part of their year in New York City. “It’s a tremendous logistical challenge,” he says.

Nevertheless, Bindel is excited at the prospect of strengthening academic and industrial collaborations and exploring new funding opportunities in the city.