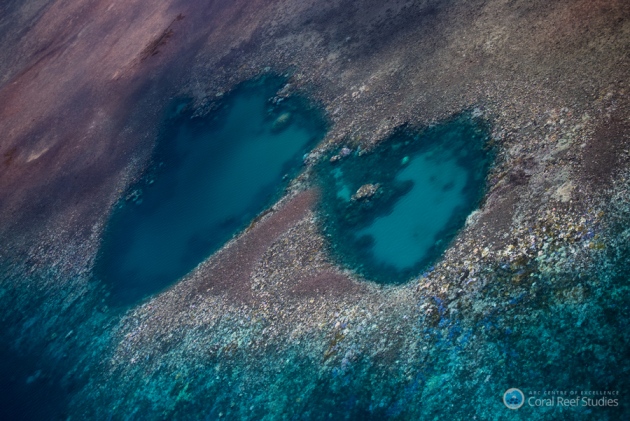 Coral bleaching on the Great Barrier Reef shows up as white and yellow patches visible from aerial surveys.

Australia’s Great Barrier Reef is undergoing the most severe bleaching event in its history, as corals along the reef expel the symbiotic algae that provide them both with their rich colours and food.

Terry Hughes, director of the ARC Centre of Excellence for Coral Reef Studies at James Cook University in Townsville, Australia, is one of a team making aerial surveys of the reef to assess the extent of the bleaching. He talked to Nature about what he has seen. 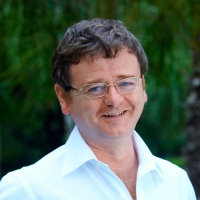 How bad is the bleaching on the Great Barrier Reef?

It’s quite challenging to witness the severity of this bleaching — it’s the worst we’ve ever seen. I’ve spent seven days in the air on a light plane and in a helicopter, criss-crossing the whole barrier reef. By the end of Friday (15 April) when I’ve done my last flight, we’ll have flown over about 900 individual reefs. We’ve scored every one for the severity of the bleaching. The part that’s affected is about 1,100 kilometres long, from New Guinea down to about Cairns [the whole reef is approximately 2,300 kilometres long].

What does this mean for the coral?

Those corals that are lightly bleached will more than likely regain their normal colour in the next few months, and there won’t be any significant mortality. That’s the case in the southern one-third or so of the barrier reef today. At the other end of the spectrum are corals that are snow white — they’ve been exposed to very high temperatures, and many of those corals will die. The key determinant of whether a reef bleaches or not is whether it sits in very hot water for a while.

We’re already seeing up to 50% mortality on the most severely bleached reefs in the northern portion of the Great Barrier Reef. We will lose a significant number of corals over the coming weeks. We’re measuring that right now. The table corals and the staghorn corals — which provide the nooks and crannies for fish and other creatures — are more susceptible. Losing a lot of corals has a broader ecological impact: species that eat the corals lose their food source; fish that would hide in the corals become more susceptible to predation from sharks.

Has comparable bleaching happened before?

This is the third bleaching event that the barrier reef has experienced at a large scale, after 1998 and 2002, but this is much worse in terms of the number of reefs that are severely bleached. It could have been worse: we were lucky enough to have an ex-cyclone [the remains of cyclone Winston, which had passed over Fiji] come to the Queensland coast. It brought cloud to the middle and southern barrier reef, which cooled it down. Without that cyclone, the whole reef would have bleached as severely as the northern part.

The temperature on the barrier reef has slowly been rising as a result of global warming, decade by decade. Today, the northern barrier reef is half a degree centigrade warmer than it was 30 years ago. The southern part is closer to a full degree centigrade warmer. El Niño events happen on a regular basis. But it wasn’t until 1998 that they started to cause bleaching events. It’s the underlying baseline temperature that’s turning El Niño events into climate extremes for the reef.

This composite picture shows a reef in American Samoa before, during, and after a coral bleaching event in 2015.

And this coral bleaching is a global phenomenon?

This is a big El Niño event, comparable to the one in 1998, which so far is the biggest global coral bleaching event. I’m a bit wary of using the word global. I think it might be a bit misleading in this context. In late 2015, there was some bleaching in Hawaii, but I don’t think it was that extensive. Then there was bleaching reporting from Fiji, but this was halted in its tracks by the cyclone that that cooled everything down. The reports I’ve seen from Fiji are quite modest bleaching, whereas Kiribati has been very severely damaged. I think it’s a little bit premature to call it a global event until we actually see the scale of it.

What can be done about this?

The main issue is obviously reducing greenhouse-gas emissions. Here in Australia, that’s very controversial, because our government is trying to prolong the export of coal. The Commonwealth Government of Australia has recently issued a lease for a new coal mine in Queensland. It will export its coal across the Great Barrier Reef, so shipping and dredging will all increase if this coal mine proceeds. Obviously, the last thing the Great Barrier Reef needs is more coal mines.