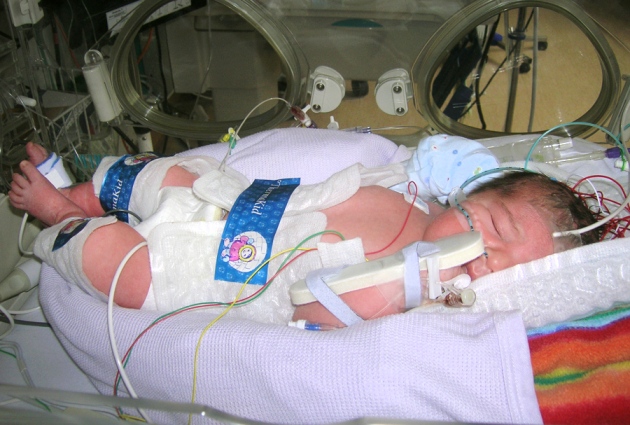 Nearly 750,000 babies born each year in the United Kingdom are at risk of brain damage because of low oxygen during birth.

Cooling babies who are at risk of brain damage provides long-lasting prevention of such injuries, researchers report today in the New England Journal of Medicine1.

A team led by Denis Azzopardi, a neonatologist at King’s College London, lowered the body temperature of 145 full-term babies who were born after at least 36 weeks of gestation. All were at risk of brain damage because they had been deprived of oxygen during birth.

The researchers cooled the infants to between 33°C and 34°C for 72 hours, starting within 6 hours of birth. The technique is known to boost the chances that children avoid brain damage until they become toddlers2, but any longer-term benefits have remained unclear.

The study finds treated babies had better mental and physical health than untreated infants through to ages 6 or 7: they were 60% more likely to have normal intelligence, hearing and vision. Those who survived to childhood also had fewer disabilities such as difficulty walking and seeing.

"The bottom line is that this doubles a child’s chance of normal survival," says David Edwards, a neonatologist at King’s College London and an author of the study.

Neonatologist David Rowitch from the University of California, San Francisco, who studies treatments for paediatric brain damage, says the findings are important because they show sustained improvements. "This study is encouraging, adding to the weight of evidence showing both positive early indicators and also school-age benefits to hypothermia," Rowitch adds.

Previous research3 suggests that the cooling works by slowing down or stopping the death of oxygen-deprived cells — a process known as apoptosis.

Researchers are also testing whether combining therapies such as xenon gas4 or the blood-boosting molecule erythropoietin5 with hypothermia can increase the number of children who avoid brain damage.

“This study is a proof of concept that this is a fruitful area for research,” says Edwards, who is currently involved in a xenon trial.

But although hypothermia is being used more routinely in countries such as the United States and the United Kingdom, it is not yet widely available in poor countries, Edwards notes — despite greater need because these nations often lack routine obstetric care, which puts more infants at risk of brain damage.

“The problem of the moment is whether this work can be extended into geographical areas such as Nepal, Tibet, Uganda, and Kenya — and that is work that needs to be done,” he says.