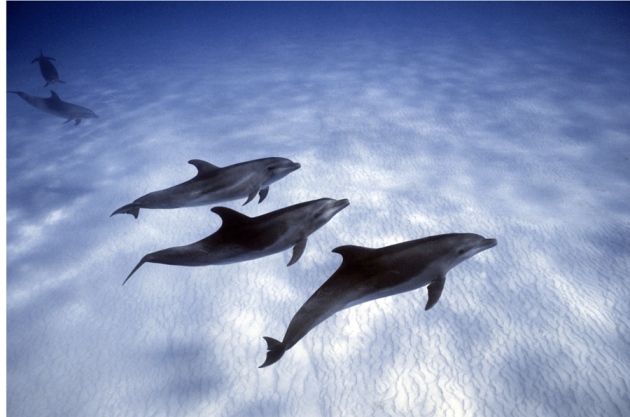 Bottlenose dolphins can detect prey with a sonar-like trick similar to that used by bats — and the similarity extends to the genetic underpinnings of this ability.

A new analysis suggests that many genes evolved in parallel in bats and dolphins as each developed the remarkable ability to echolocate.

Different organisms often independently evolve similar observable traits such as anatomical or functional features, but the genetic changes underpinning such 'convergent evolution' are usually different. The new study, published today in Nature1, hints that evolution may be finding the same genetic solutions to a problem more often than previously thought.

“These results imply that convergent molecular evolution is much more widespread than previously recognized,” says molecular phylogeneticist Frédéric Delsuc at the The National Center for Scientific Research (CNRS) at the University of Montpellier in France, who was not involved in the study. What is more, he adds, the genes involved are not just the few, obvious ones known to be directly involved in a trait but a broader array of genes that are involved in the same regulatory networks.

Biologists have long debated how different animal species independently developed echolocation, the sonar-like mechanism in which animals listen to their own clicks and calls echoing back from obstacles or prey. In the study released today, biologists led by Stephen Rossiter and Joe Parker at Queen Mary University of London, drew upon the largest dataset ever to look for convergent evolution in 2,326 genes shared by 22 mammals, including six bats and the bottlenose dolphin.

The team found a 'convergence signature' in nearly 200 regions of the genome. Genes involved in hearing were more likely to have evolved similarly across species than those involved in other biological traits. Some genes involved in vision were also among those bearing the strongest signal of convergence — a surprising result.

In earlier studies, scientists had found far fewer examples of genes clearly involved in convergent evolution of various traits, Parker says, because no one had taken a look across entire genomes before.

“This study is the first to examine genome-wide convergence at the level of protein sequences and connect it very explicitly to convergent phenotypes, which is very nice,” says evolutionary biologist Antonis Rokas at Vanderbilt University in Nashville, Tennessee.

The work would not have been possible without the genetic sequence data now available for dozens of different mammals — including four newly sequenced bat genomes — and the use of the Queen Mary GridPP High Throughput Cluster, a powerful computing grid. GridPP is normally used to churn through data from the Large Hadron Collider at CERN, Europe's particle-physics lab near Geneva in Switzerland. It took Rossiter and Parker’s team roughly a month to perform its analyses using the cluster; it would have taken years on a desktop computer, Parker says.

But finding out whether and how any of the 200 genes from this analysis are involved in echolocation will be a major challenge.

Rokas says that a statistical test of the kind used in the new analysis to check whether evolution has specifically favored particular genetic sequences has been shown to throw up many false positive results. He says that convergence — the evolution of similar genetic sequences — is a strong indication that natural selection does indeed favor these sequences. But, he adds, it would also help to know how selection influences changes in the types of amino acids within the proteins that the genes code for. If the convergent amino acids are physiochemically quite different than the ancestral amino acids, it's a stronger signal that they were favored by natural selection: such ”radical substitutions” are rarer, “because they tend to change the structure and function of proteins quite a bit,” he says.

Stronger evidence yet would come from showing that any of the specific amino-acid changes in the paper improve an animal's ability to use the sonar mechanism, says Sean Carroll, a geneticist at the University of Wisconsin–Madison and at the Howard Hughes Medical Institute in Chevy Chase, Maryland.

“The real test,” agrees Parker, “is to go into the most convergent genes and start elucidating their functions directly.”