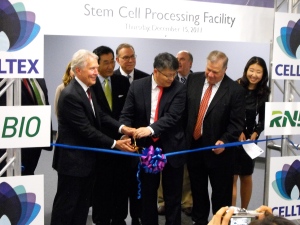 Relations have soured between Celltex and RNL Bio since December 2011 when they launched their stem-cell bank in Sugar Land, Texas.

US citizens who had pinned their hopes on a company being able to offer stem-cell treatments close to home will now need to travel a little farther. Celltex Therapeutics of Houston, Texas, stopped treating patients in the United States last year following a warning from regulators. A 25 January e-mail to Celltex customers indicates that the firm will now follow in the footsteps of many other companies offering unproven stem-cell therapies and send its patients abroad for treatment — but only to Mexico.

The stem-cell treatments offered by Celltex involved extracting adult stem cells from a patient, culturing them and then reinjecting them in a bid to replenish damaged tissue. It had been offering the treatment for more than a year — with one of its high-profile customers being Texas governor, Rick Perry — when the US Food and Drug Administration (FDA) wrote to the company on 24 September 2012 advising it that the stem cells it harvested and grew were more than “minimally manipulated” during Celltex's procedures. As such, the FDA regarded the cells as drugs, which would require the agency's approval to be used in treatments. The FDA also warned that Celltex had failed to address problems in its cell processing that inspectors from the agency had identified in an April 2012 inspection of its cell bank in Sugar Land, Texas. Shortly after it received the letter, Celltex stopped injecting stem cells into patients.

For customers who still had cells banked at Celltex and were wondering how to get them out, things became more chaotic when Celltex and RNL Bio, a company based in Seoul, South Korea, which operated the processing centre and bank in Sugar Land, sued each other over financial disagreements. Celltex had to issue a restraining order just to gain access to the cells.

The January e-mail from Celltex reassures customers that their cells are safely stored in a facility in Houston and adds: “We anticipate that we will be able to offer our stem cell therapy services to physicians in Mexico starting very soon!” The e-mail also says that the company is building a new laboratory in Houston, to be opened in March.

Celltex adds that it will carry out an FDA-approved clinical trial, to start “shortly after” a March meeting with the FDA, pending a positive review from the regulator. However, the company had said in a 25 October e-mail to patients that it would start such a trial “within two months” and that patient enrolment could begin in late November.

Leigh Turner, a bioethicist at the University of Minnesota in Minneapolis, says that the move to Mexico is "not surprising", given the company’s difficulties in the United States.

As Celltex's stem culturing and banking technology was licensed from RNL Bio, it is also not clear whether it has the expertise needed to launch a clinical trial on its own, says Turner. "It would have to build a stem-cell company from the ground floor up. I wouldn’t say it is anywhere near the starting line."

Celltex did not respond to questions about how it would ship stem cells to Mexico or how it would perform the clinical research needed to seek FDA approval.

The January e-mail, however, does attempt to put its customers' minds at ease about their cells. “We hope this gives you confidence that we are taking care of them as the precious material they are," it says.