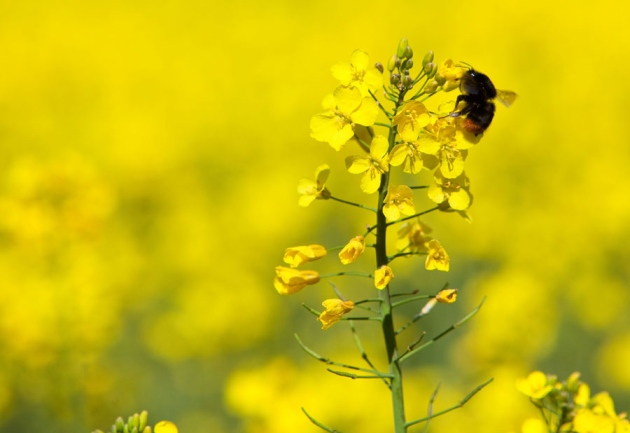 A red-tailed bumblebee forages in oilseed rape (canola), a crop that is often treated with neonicotinoids.

A dip in the populations of wild bees across the English countryside over nine years coincided with the use of chemicals called neonicotinoids on the crops in which the bees forage, ecologists say.

The UK government-funded study, published on 16 August in Nature Communications1, is the first to link the controversial insecticides to the decline of many bee species in real-world conditions. Previous work has studied the effects of the insecticides on bees in the laboratory, or on a few wild-bee species in a small number of fields over a few weeks2.

“Our results show that neonicotinoids are harmful to wild bees — we are very confident about that,” says Nick Isaac, an ecologist at the Centre for Ecology & Hydrology (CEH) in Wallingford, UK, who worked on the study.

The report feeds into a raging debate about whether to ban or restrict the widely used chemicals to help bee populations to recover. Many bee species are in decline around the world, although climate change, habitat loss, parasites and other insecticides besides neonicotinoids have all been linked to the problem, says Ben Woodcock, another ecologist at the CEH.

The European Union has imposed a temporary ban on the use of three neonicotinoids — clothianidin, imidacloprid and thiamethoxam — in most cases. But some chemical manufacturers and farmers say that alternative insecticide treatments aren't as effective, and the United Kingdom lifted the ban last year, arguing that “emergency rules” allowed use of the insecticides where crops were at greatest risk of pest damage. The European Food Safety Authority in Parma, Italy, is due to review the effects of the chemicals on bees by January 2017 — a report that could lead the EU to extend its ban.

In the United Kingdom, farmers were licensed to treat oilseed rape (Brassica napus) seeds with neonicotinoids starting in 2002; by 2011, four-fifths of such seeds were treated with these chemicals. Isaac and his colleagues looked at local records of the populations of some 62 wild-bee species from 1994–2011.

After 2002, they observed an average decline of 13% in the bees' geographical spread. But the bee species that collected pollen and nectar in oilseed-rape fields were more badly affected than others.

Based on their data, the researchers estimate that the neonicotinoids were responsible, on average, for a 7% decline in the bees' distribution — about half of the total drop. But in the case of the bees that forage in oilseed rape, the insecticides would have caused a 10% fall.

The result is yet more evidence that neonicotinoids are involved in bee decline, says Christopher Connolly, who studies human and bee neuroscience at the University of Dundee, UK.  “The evidence against neonicotinoids now exists in key bee brain cells involved in learning and memory, in whole bees, entire colonies, and now, at the level of whole populations of wild bees,” he says.

The study cannot show a causal relationship between neonicotinoid use and the decline of wild bees, says Utz Klages, a spokesperson for Bayer Crop Science in Monheim, Germany, one of the world’s main neonicotinoid producers. The company has long argued that the evidence that the insecticides can harm bees is limited.

But Richard Pywell, an ecologist at the CEH who was also involved in the study, says he thinks that the correlations between insecticide use and bee decline make a clear case.

Pywell says that he cannot comment on whether the EU should continue its neonicotinoid ban. “Our job isn’t to decide about policies. It is to provide independent evidence to the EU and UK policymakers,” he says.

The problem for policymakers is how to control crop pests while encouraging a healthy diversity of pollinators such as bees, Woodcock says. “You can’t just say, ‘As long as we save the bees, everything else can go to hell’,” he says. “We also need to consider the effects of whatever pesticide is used instead of neonicotinoids when those are banned.”