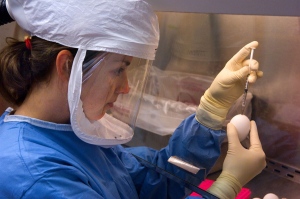 Certain experiments which scientists hope may help with flu pandemic preparedness, may be possible again if the voluntary moratorium on them lifts.

Some scientists may resume controversial experiments on the potentially deadly avian influenza virus H5N1, following a high-level meeting this week. The suggestion comes in the wake of a global debate about the risks and benefits of such research and a voluntary moratorium on the experiments lasting nearly a year.

International flu experts, research funders and public-health officials met on Monday and Tuesday this week at the National Institutes of Health (NIH) in Bethesda, Maryland to discuss the future of the work — so-called gain-of-function experiments that change the properties of what is called highly pathogenic avian influenza H5N1 in ways that might make it more transmissible and infectious in humans, in order to investigate the possible natural evolution of the virus.

The meeting did not reconcile all differences of opinion over the risks and benefits of such work, or explicitly address the moratorium, although it appears likely that some investigators might resume H5N1 work.

“I suspect that we will see a lifting of the moratorium on the part of people who are not NIH funded,”  says Anthony Fauci, director of the National Institute of Allergy and Infectious Diseases (NIAID), the part of the NIH that is the primary funder of such research.

They will do that, he says, according to the guidelines of their own funders and of the countries in which they work. “It’s become clear from the chatter in the community that they were patiently waiting for this particular event.” He adds that researchers have been "very good at adhering to the moratorium".

The meeting was designed to discuss a new framework for overseeing US funding decisions on gain-of-function experiments. It would put in place, for select experiments, an extra layer of review — in addition to peer review, and other standard safety and ethical reviews — by the US Department of Health and Human Services (HHS).

This review could result in the research not being funded, or possibly being recommended to another branch of government to be handled as classified. The purpose of the workshop was to road test the framework on some hypothetical case studies to identify its strengths and weaknesses. Attendees pointed out many of the latter.

Many complained about vague terms used in the framework document. To be considered fundable, for example, one criterion requires that the research should not yield, an “experimental virus that has increased transmissibility, pathogenicity, or expanded host range, unless there is evidence that such a virus could be produced through a natural evolutionary process in the foreseeable future”. Researchers took issue with the subjectivity of the “foreseeable future” and questioned what such evidence would entail.

“I could see this swamping the system and certainly result in a reduced desire to do this work.”

If a project meets this criterion and others, a secondary 'departmental 'HHS review could be implemented. But according to the current draft of the framework, this would apply to almost any gain-of-function experiment.

Richard Webby at St Jude Children’s Research Hospital in Memphis, Tennessee said that roughly 75% of studies in the H5N1 research portfolio would trigger this review. “I could see this swamping the system and certainly result in a reduced desire to do this work,” he said at the workshop.

One solution, proposed by Yoshihiro Kawaoka at the University of Wisconsin, Madison, entailed focusing only on studies that would enhance the ability of H5N1 to transmit between mammals by air through respiratory droplets, essentially the kind of experiments that he1 and Ron Fouchier2 at the Erasmus University Medical Centre in Rotterdam, the Netherlands, had performed, and which resulted in the global debate about this kind of research. That kind of narrow dragnet appealed to many observers at the workshop.

The outcome of the workshop seemed to indicate that the NIAID would continue to fund such research once a new framework is in place. HHS is now inviting comments and proposals at HHS-Framework-H5N1@mail.nih.gov until 10 January.  The draft proposal can be seen here. The moratorium cannot be lifted for NIH-funded researchers until this process is complete. And Fauci also emphasized the need for more input from the public.

Adolfo García-Sastre, an NIH-funded flu researcher at Mount Sinai School of Medicine in New York City, and a signatory of the moratorium,3 put in place in January 2012 and originally meant to last only 60 days, says that he supports the return to work of non-NIH funded researchers as it might prompt faster action in the United States.

Fouchier notes that the outcome of the meeting does not  necessarily mean the work will restart immediately. "It would be nice if we could draft a statement that all previous signatories would agree to. That may take some time."

He adds that he worries about the long-term effects of the moratorium and the added bureaucracy on researchers interested in doing this kind of work. In the short term, for example, two graduate students and a postdoc in his lab have had to put their research on hold for nearly a year. In the long run, many could be dissuaded from taking up the research, Fouchier says. “It’s going to kill the field.”