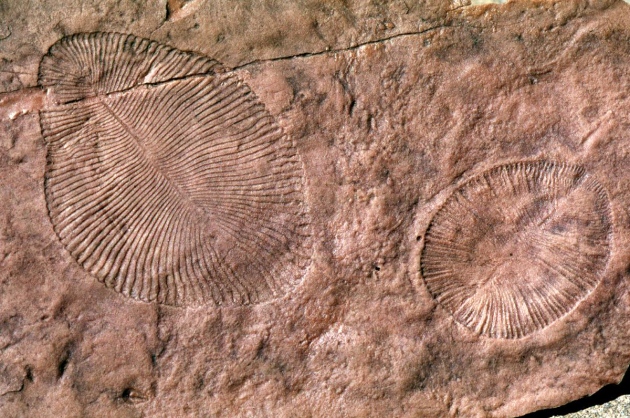 Some enigmatic fossils regarded as ancient sea creatures were land-dwelling lichen, argues a paper published today in Nature1. But other palaeontologists flatly reject the hypothesis, by Gregory Retallack, a geologist at the University of Oregon in Eugene. His paper not only marks a dramatic reinterpretation of the fossils but suggests life on land began 65 million years earlier than researchers now estimate.

The nature of fossils from the Ediacaran period, some 635 million–542 million years ago, has been fiercely debated by palaeontologists. Many think that the fossils represent some of the earliest complex marine organisms to evolve — over 10 million years before the Cambrian explosion, which saw the rapid emergence of the major complex animal groups.

But where others envisage Ediacaran sea beds crawling with archaic animals, Retallack sees these sites in southern Australia as dry, terrestrial landscapes dotted with lichens.

Retallack has been advancing his hypothesis — that fossils such as the segmented, pancake-shaped Dickinsonia and the worm-like Spriggina were not animals, but instead lichens, traces of slime moulds and soil structures — since the 1990s.

The latest study proposes that rock in the Ediacara Member in South Australia — where palaeontologist Reginald Sprigg first discovered Ediacaran fossils in 1947 — represents ancient soils, and presents new geological data. Among other lines of evidence, Retallack argues that the rock’s red colour and weathering pattern indicate that the deposits were formed in terrestrial — not marine — environments.

Under this hypothesis, Retallack recasts Dickinsonia and Spriggina as lichens and suggests that trails attributed to Ediacaran worms actually indicate slime-mould growth. In place of a sea bed, Retallack says that he sees a terrestrial environment similar to the Arctic tundra, with large organisms present “in greater diversity than life in the ocean” at the time.

Other experts on the Ediacaran period give Retallack’s paper a cool reception. “I and my colleagues are quite weary with being asked to review his material over the last ten years,” says James Gehling, a palaeontologist at the South Australian Museum in Adelaide.

Guy Narbonne, a palaeobiologist at Queen’s University in Kingston, Ontario, says that the new paper is little more than a summary of Retallack’s “long-standing views” on Ediacaran life.

He adds: "Most of us appreciated that Retallack's lichen hypothesis was innovative thinking and tested his ideas critically, but it quickly became clear that there are simpler explanations for the features Retallack had validly noted, and most of us moved on to more promising explanations."

Gehling is unconvinced by the new paper: “Retallack has presented not a single piece of evidence that would contradict the interpretation of the sedimentary layers involved as anything other than marine.”

He and Narbonne argue the red coloration of the rock and its weathering patterns, which Retallack presents as new evidence, could be just as easily accounted for by a marine origin.

Narbonne says that “multiple sedimentary and geochemical approaches by multiple independent laboratories worldwide have nearly universally converged on a marine origin for the Ediacara biota”.

Traces of animal behaviour in the wave-rippled Ediacaran sediments also contradict the terrestrial hypothesis, in Gehling's view. Dickinsonia, an animal possibly related to today’s blob-like placozoans (the simplest multicellular organisms), left tracks after “spending time on one site, decaying the organic matter below, and then creeping across the mats to the next site,” he says, and the “mollusc-like” Kimberella created scratch marks on the sea floor as it grazed.

“If 60 years of published interpretations of the Ediacara biota have shown anything,” Gehling says, “it is that the Ediacara biota were a diverse array of organisms with remarkably consistent body plans found in distinct associations and most often preserved in place on fossil sea floors.”

Retallack remains unfazed. “I am expecting controversy,” he says, adding that he anticipates “the usual trajectory of grief, beginning with denial, then proceeding to mourning and acceptance” of his idea.