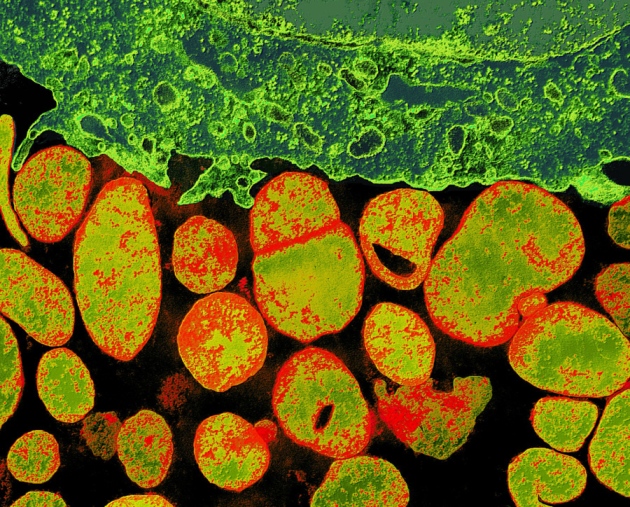 Mycoplasma (orange) can surround and infect cells and invalidate results of gene-expression studies.

John Hogenesch saw the anguished look on his technician’s face and knew instantly that her experiments had gone haywire; he also had a pretty good idea of why. “Check your culture for Mycoplasma contamination,” he advised. The bacterium is notorious for infecting cell cultures, and had indeed compromised her experiments.

In fact, the problem is widespread. Hogenesch, a genome biologist at the University of Pennsylvania in Philadelphia and his colleague Anthony Olarerin-George have found that more than one-tenth of gene-expression studies, many published in leading journals, show evidence of Mycoplasma contamination1. The infestations are undermining research findings and wasting huge amounts of money, Hogenesch says.

He should know. His lab quickly overcame an infestation last year, but a previous plague cost it some US$100,000 and a year of research. Mycoplasma takes hold quickly, he says. “All it takes is one person not to check, and — bam — you have it.” The bacterium often comes from lab workers, and is not killed by the antibiotics typically used to rid cell cultures of contaminants. And unlike many other microorganisms, which turn the growth medium turbid, Mycoplasma leaves no visible signs of its presence.

Mycoplasma is a long-standing problem. The bacterium plagued early cultures of HeLa cells, a widely used human cell line established in the 1950s. Surveys of individual collections have long served as a warning: a 1993 study2, for instance, found Mycoplasma in 15% of 20,000 cultures from US Food and Drug Administration labs. Companies and centres that distribute cells and reagents are now fastidious in screening for it.

To get a global perspective on the problem, Hogenesch and Olarerin-George looked for stretches of Mycoplasma DNA in RNA-sequence data from more than 9,000 samples — collected during experiments done between 2012 and 2013 to measure gene expression in cultured mammalian cells. A total of 11% of the samples were found to contain Mycoplasma DNA at levels indicative of contamination.

Some of the studies with the highest levels were published in leading journals such as Cell, Nature and Proceedings of the National Academy of Sciences, says Hogenesch. Contamination does not necessarily invalidate those findings, but the bacterium can influence the expression of hundreds of genes and hinders cell growth by competing for nutrients. In one particularly contaminated data set, of individual lymphoma cells, Hogenesh and Olarerin-George identified 61 genes whose levels were altered by Mycoplasma. Their work is available on the bioRχiv preprint server1, and they plan to submit their findings to a peer-reviewed journal soon.

If more than one-tenth of cell cultures are contaminated, the costs in wasted time and resources, such as repeating experiments and replacing cells, could run into hundreds of millions of dollars, says Hogenesch. In 2013, for example, the US National Institutes of Health spent about $3 billion on research that uses cell lines, and Hogenesch estimates that about one-third of his lab costs go on tissue culture.

Contamination is a result of “sloppy cell-culture work”, says Hans Drexler, a physician–scientist at the German Collection of Microorganisms and Cell Cultures in Braunschweig. “Mycoplasma don’t fall from the sky,” he says. “They are introduced into the cell culture by people.” He also is not surprised that so many cell cultures are contaminated. A similar percentage of the human leukaemia and lymphoma cell lines his lab received from other researchers between 2010 and 2013 tested positive for Mycoplasma, he says. But this is an improvement: one-quarter of such cultures were tainted in the early 1990s, he found3.

Drexler believes that Mycoplasma contamination persists because of a “black market” in cell lines — researchers often share cultures in violation of materials-transfer agreements. He estimates that 10% of the cell lines he receives from these sources are contaminated, compared with none from official suppliers. To solve the problem, he urges labs to spend the extra money on cell lines from reputable sources, and test those they have for contamination.

“There’s no magic twenty-first-century bullet that’s going to kill these things,” Hogenesch says. “We have to be continuously vigilant, clean up the cultures that have them, and destroy the bacteria altogether.”