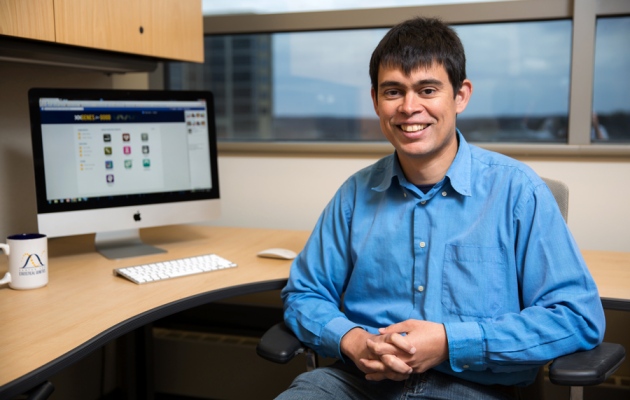 Gonçalo Abecasis leads Genes for Good, which seeks to recruit 20,000 people willing to have their genomes sequenced.

Companies that offer genetic testing directly to consumers are renewing their ambitions. Recent moves by US regulators have given the firms fresh hope that the large genetic data sets they amass will have commercial as well as scientific value, spawning diagnostic tests or drugs.

The moment seems ripe. In February, the US Food and Drug Administration (FDA) allowed 23andMe — a company in Mountain View, California, that has offered genome analysis to consumers for nearly a decade — to begin marketing a test for mutations that cause a rare disease called Bloom syndrome. This was the first time that the agency had approved a genetic test marketed to the public, not clinicians — and companies are betting that it will not be the last.

Many expect the FDA to further expand the types of medically relevant information that consumer genetic tests can supply. The February decision “is a huge step for the field”, says Ken Chahine, a senior vice-president at Ancestry.com DNA of Provo, Utah, which offers genetic testing to the public. “You’re starting to see others get into this space because everyone sees a lot of value in it.”

Ancestry.com DNA, a subsidiary of genealogy website Ancestry.com, is one of those newcomers. The company has so far collected DNA from 850,000 customers, which it uses to help people to find relatives among members of its genealogy-focused social network. It is now exploring the idea of collecting users’ medical histories, too, so that it could offer them medically relevant information and investigate the genetic roots of diseases.

23andMe is farther down this road and has already attracted interest from health-care firms. In January, it signed a US$60-million deal with California biotechnology company Genentech, which will use genetic data from 23andMe customers to develop therapeutics. The personal-genomics firm has also hired former Genentech executive Richard Scheller to lead an in-house effort to develop drugs. And, similar to Ancestry.com, 23andMe has access to a home-grown social network that encourages its customers to interact with the company and each other.

“They’re smart to tether their research to a platform that has a much broader market base of people.”

Commercial firms are not the only group seeking to build large pools of participants for genetic studies — or the only ones harnessing social networks for this cause. The medical-research study Genes for Good, which launched on 31 March, is seeking participants through Facebook. Users of the social-networking service can download a Genes for Good app that guides them through a series of health surveys to collect basic information, such as height, weight and whether a person uses tobacco. Users who complete 15 of these surveys can receive a ‘spit kit’ to collect saliva for DNA sequencing, and are encouraged to continue providing health information afterwards.

“We wanted to do something that would give us the possibility of capturing very large numbers of people in a way that is more engaging than the traditional types of study,” says Gonçalo Abecasis, a statistical geneticist at the University of Michigan in Ann Arbor who is leading the study.

Drawing on 23andMe’s example, the project will return genetic information to users — such as hints about ancestry drawn from a user’s genetic markers. The project also hopes to share the information it collects with other academic scientists, or even companies developing new therapies, after removing identifying information such as names and addresses.

So far, Genes for Good has recruited 4,200 potential participants of the 20,000 it seeks, and hundreds of those have already sent back their spit kits. That is a relatively small number of genomes compared to the amount of genetic information contained in private databases. And it is dwarfed by the amount of data being amassed by public projects, such as one run by the UK Department of Health that aims to sequence the genomes of 100,000 patients.

Such efforts, in theory, could compete for participants with commercial ventures such as Ancestry.com DNA and 23andMe, which ask customers to pay for testing similar to the type that Genes for Good will offer for free. It is not clear whether that will affect the companies’ ability to attract customers and expand their data sets, given their significant head start.

Genes for Good is tapping the power of Facebook, with its 1.44 billion active monthly users. Given this potential, the project could become more massive than any previous genetic study, says Michelle Meyer, a bioethicist and legal scholar at the Icahn School of Medicine at Mount Sinai in New York. “They’re smart to tether their research to a platform that has a much broader market base of people than we’re used to seeing in research studies,” she adds.