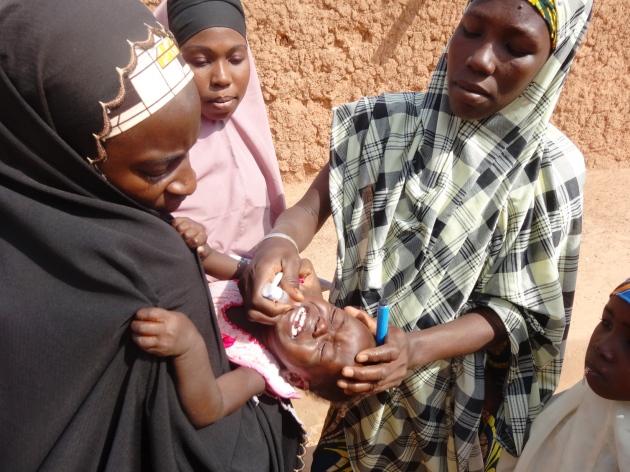 A child receives the oral polio vaccine, which confers the strongest immunity, in Kano, Nigeria.

The cause of an unusually severe outbreak of poliomyelitis that hit Congo in 2010 has been identified: a strain of poliovirus that sometimes resists the immune responses mounted by vaccinated people.

Fortunately, people who have recently received the live, oral polio vaccine, which provides the strongest immunity, are  protected against the strain. Its spread in Congo was stopped by orally re-vaccinating the entire population of the surrounding areas.

However, a new study, published on 18 August in the Proceedings of the National Academy of Sciences1, suggests that a portion of those who receive the weaker, dead vaccine would have been vulnerable. This vaccine is now common in developed countries. What's more, the researchers who characterized the strain warn that something similar may appear again during the final stages of the global effort to eradicate polio.

Although the world is on the cusp of stamping out polio completely through vaccination, periodic outbreaks still occur. The 2010 outbreak infected 445 people, killing almost half of them. It is still not clear how many of those who died were vaccinated, but the unusually high rate of deaths puzzled scientists.

To investigate, Christian Drosten, a virologist at the University of Bonn Medical Centre in Germany, together with an international team of researchers, sequenced the virus strain that caused the outbreak. They found a never-before-seen combination of two mutations, both in the proteins of the strain's 'coat', which make it harder for antibodies to stick to the virus. “It’s a virus that can escape the usual level of population immunity that we have,” says Drosten.

The team also tested blood samples from volunteers in neighbouring Gabon, where part of the research team is based, as well as from German medical students who had all been vaccinated. Their antibodies were less potent against the Congo strain than against the strain used in the vaccine. The researchers say that 15–29% of the German students would have been essentially unprotected from the 2010 virus.

The good news is that the strain will not cause problems for someone who is newly vaccinated with the oral vaccine. “Fresh immunity caused by a fresh re-vaccination will stop it,” says Drosten.

Still, he worries that other variants of the virus that can escape vaccine-induced immune responses might rear up again, in the closing stages of the current worldwide eradication campaign. He speculates that such strains circulate in the wild but that more common ones normally have a survival edge. When the rarer strains arrive in areas where dominant strains are eradicated but vaccine coverage is incomplete, outbreaks similar to the deadly one of 2010 could arise.

Olen Kew, a virologist at the US Centers for Disease Control and Prevention (CDC) in Atlanta, Georgia, is less concerned. “The bottom line is that oral polio vaccine works wherever it is used properly — at high rates of coverage,” he says. “The Republic of Congo had a period of very low coverage because of civil unrest, and immunity gaps widened.”

Drosten’s team showed that the outbreak virus was most closely related to an Angolan strain from 2009, and that both descended from viruses in central Asia, where polio has still not been fully eradicated. The researchers call for better surveillance to detect the spread of similar variant viruses.

Mark Pallansch, director of the CDC’s Division of Viral Diseases, says that the outbreak strain has now been wiped out. He adds that all polioviruses globally are already routinely characterized by sequencing, although there can be delays in uploading the latest poliovirus sequences to public databases. Drosten says that could impede research by the wider scientific community: “It should be possible to assess a universal public database, as for other viruses.”