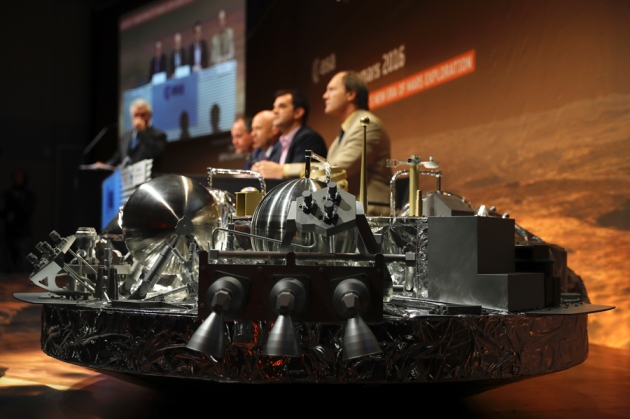 A model of the ExoMars lander Schiaparelli, in front of European Space Agency scientists explaining its failed landing on Mars.

Photos of a huge circle of churned-up Martian soil leave few doubts: a European Space Agency (ESA) probe that was supposed to test landing technology on Mars crashed into the red planet instead, and may have exploded on impact.

Mars-probe loss is a chance for ESA to learn

The events of 19 October may be painful for ESA scientists to recall, but they will now have to relive them over and over again in computer simulations. The lander, called Schiaparelli, was part of ESA's ExoMars mission, which is being conducted jointly with the Russian Space Agency Roscosmos. It was a prelude to a planned 2020 mission, when researchers aim to land a much larger scientific station and rover on Mars, which will drill up to 2-metres down to look for signs of ancient life in the planet’s soil. Figuring out Schiaparelli’s faults and rectifying them is a priority, says Jorge Vago, project scientist for ExoMars. “That’s super important. I think it’s on everybody’s mind.”

Anatomy of a crash

Unlike the British-led and ESA-operated Beagle 2 mission, which disappeared during its landing on Mars on Christmas Day 2003, Schiaparelli sent data to its mother ship during its descent. Preliminary analysis suggests that the lander began the manoeuvre flawlessly, braking against the planet’s atmosphere and deploying its parachute. But at 4 minutes and 41 seconds into an almost 6-minute fall, something went wrong. The lander’s heat shield and parachute ejected ahead of time, says Vago. Then thrusters, designed to decelerate the craft for 30 seconds until it was metres off the ground, engaged for only around 3 seconds before they were commanded to switch off, because the lander's computer thought it was on the ground.

The lander even switched on its suite of instruments, ready to record Mars’s weather and electrical field, although they did not collect data. “My guess is that at that point we were still too high. And the most likely scenario is that, from then, we just dropped to the surface,” says Vago.

The craft probably fell from a height of between 2 and 4 kilometres before slamming into the ground at more than 300 kilometres per hour, according to estimates based on images of the probe’s likely crash site, taken by NASA’s Mars Reconnaissance Orbiter on 20 October.

The most likely culprit is a flaw in the craft’s software or a problem in merging the data coming from different sensors, which may have led the craft to believe it was lower in altitude than it really was, says Andrea Accomazzo, ESA’s head of solar and planetary missions. Accomazzo says that this is a hunch; he is reluctant to diagnose the fault before a full post-mortem has been carried out. But if he is right, that is both bad and good news.

European-designed computing, software and sensors are among the elements of the lander that are to be reused on the ExoMars 2020 landing system, which, unlike Schiaparelli, will involve a mixture of European and Russian technology. But software glitches should be easier to fix than a fundamental problem with the landing hardware, which ESA scientists say seems to have passed its test with flying colours. “If we have a serious technological issue, then it’s different, then we have to re-evaluate carefully. But I don’t expect it to be the case,” says Accomazzo.

The ExoMars team will try to replicate the mistake using a virtual landing system designed to simulate the lander’s hardware and software, says Vago, to make sure that scientists understand and can deal with the issue before redesigning any aspects of ExoMars 2020.

The rover mission has already been delayed by two years, owing to hold-ups on both Russian and European sides, but Vago believes that making tweaks to its design will not push the mission back. “At this point, no one wants to think about flipping to 2022. It was painful enough to go from 2018 to 2020,” he says.

The 2020 mission still has a budget shortfall of around €300 million (US$326 million), which ESA will request from European Union member states at a meeting of ministers in December. Asked at a press briefing on 20 October whether Schiaparelli’s failure would jeopardize the mission, ESA director general Johann-Dietrich Wörner said it wouldn’t have any impact. “We have the function which we need for the 2020 mission, so we don’t have to convince them, we just have to show them,” he told reporters.

But Vago is more pragmatic. “It would have been much nicer to be able to go to the ministers with a mission where both elements had performed flawlessly.”

ESA is keen to stress that overall, the ExoMars mission can be seen as a triumph: Schiaparelli sent back test data from the majority of its descent, and its sister craft — the Trace Gas Orbiter —  successfully manoeuvred into Martian orbit. The orbiter is the more scientifically valuable of the two halves of the mission: from December 2017, it will study Mars’s atmosphere, aiming to find evidence for possible biological or geological sources of methane gas. It will also be a communications relay for the 2020 rover.

“As it is, we have one part that works very well and one part that didn’t work as we expected,” says Vago. “The silver lining is that we think we have in hand the necessary information to fix the problem.”