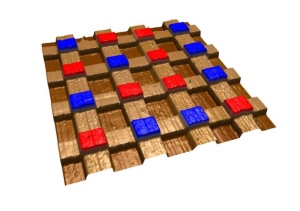 When light shines on this prototype memory device, it produces voltages in that make it possible to read out the information in the 16-cell array of digital bits.

Modern computer-memory technologies come with a trade-off. There is speedy but short-term storage for on-the-fly processing — random-access memory, or RAM — and slow but enduring memory for data and programs that need to be stored long term, typically on a hard disk or flash drive. But a prototype memory device described today in Nature Communications1 combines speed, endurance and low power consumption by uniting electronic storage with a read-out based on the physics that powers solar panels.

Ramamoorthy Ramesh, a materials scientist at the University of California, Berkeley, and Junling Wang, a specialist in oxide materials at the Nanyang Technological University in Singapore, built their prototype device using a material called bismuth ferrite.

In conventional computer memory, information is stored in cells that hold different amounts of electric charge, each representing a binary '1' or '0'. Bismuth ferrite, by contrast, can represent those binary digits, or bits, as one of two polarization states, and can switch between these states when a voltage is applied — a property called ferroelectricity. Ferroelectric RAM based on other materials is already on the market. It is speedy, but the technology has not found widespread use. One problem is that the electrical signal used to read out a bit erases it, so the data must be rewritten every time. This leads to reliability problems over time.

Ramesh and Wang realized that they could take advantage of another property of bismuth ferrite to read these memory arrays in a nondestructive way. In 2009, researchers at Rutgers University in Piscataway, New Jersey, demonstrated2 that the material has a photovoltaic response to visible light — meaning that when it is hit by light, a voltage is created. The size of the voltage depends on which polarization state the material is in, and can be read out using electrodes or transistors. Crucially, shining light on the material doesn’t change its polarization, and so does not erase the data stored in it.

To test whether photovoltaic ferroelectric memory really worked, Ramesh and Wang grew films of bismuth ferrite on top of a metal oxide, then etched it into four strips. On top of that they laid four metal strips at right angles to the first set. The 16 squares where the crossbars met each acted as memory cells, and the metal and metal oxide acted as electrodes. The team used the electrodes to polarize the cells, then shone light onto the whole array and found that it produced two types of voltage readings — one negative (0) and one positive (1).

It takes less than 10 nanoseconds to write to and read the cells, and recording the data requires about 3 volts. The leading nonvolatile RAM technology, flash, takes about 10,000 times longer to read and write, and needs 15 volts to record.

“This is an important step towards real technological applications of the ferroelectric photovoltaic effect,” says Sang-Wook Cheong, a condensed-matter physicist at Rutgers, who led the 2009 study.

Victor Zhirnov, a materials specialist at the Semiconductor Research Corporation in Durham, North Carolina, says that the technology will need to be made much smaller before it is competitive. Commercial flash memory is built using equipment that can pattern features as small as 22 nanometres, whereas the strips in the photovoltaic ferroelectric memory device are a hefty 10 micrometres wide. “Smaller size results in more memory per cubic centimetre, and thus lower cost per bit,” says Zhirnov.

Ramesh says that there is no fundamental reason that the memory cells in his device could not be made as small as those in other memory arrays, although it will pose some practical challenges.

There is also the matter of designing a system to light up the cells one at a time. Illuminating the whole array all the time, as in these first experiments, is probably not practical, says Ramesh. So engineers may have to design optical parts to funnel light to each cell individually when it needs to be read.