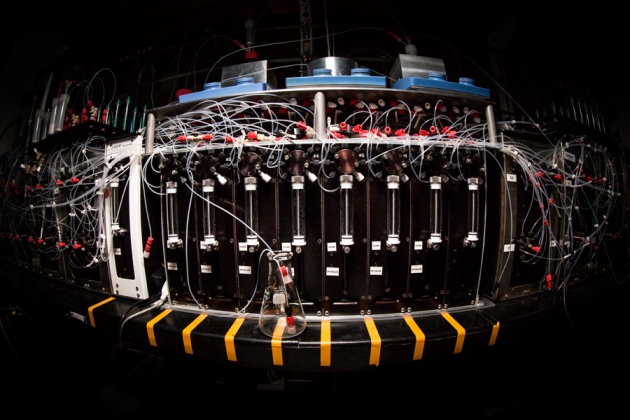 Synthesizing complex molecules is a notoriously fiendish art — and a daily toil for many chemists. But Marty Burke, a chemist at the University of Illinois at Urbana-Champaign, says that he has found a way to create a machine that stitches molecules together at the touch of a button.

“We could bring the power of synthesis to non-specialists,” says Burke. In his system, described today in Science1, a computer controls a system of pumps and syringes to push around solutions containing compounds that can be clipped together like building blocks to create a wide variety of larger, more complicated molecules.

Burke has spent years developing the all-important building blocks, a library of organic acid molecules containing boron, called MIDA boronates. These compounds — now commercially available — are designed to have chemical groups on either end that can react with each other easily. By combining the right building blocks in the right order, Burke had already reported that it is possible to make a wide range of differently shaped larger molecules.2

Simply using pumps and syringes to move around compounds — a process known as 'flow chemistry' — is not enough for full automation. Usually, a manual purification reaction is needed after two building blocks are clipped together: unwanted side-products and impurities must be washed away, and the successfully stitched new molecule must be retrieved for further reaction with another building block. But Burke's team found a way to automate the purification step too: the newly reacted MIDA boronates stick to silica gel, making it easy to wash away other chemicals. Then, simply by adding another solvent, called tetrahydrofuran (THF), Burke found that it was possible to separately wash off the MIDA boronates for future reactions. “The entire process from beginning to end is performed by a machine,” says Burke.

“If it weren't for that THF elution trick, I don't know how this could have been automated,” says Derek Lowe, an industrial chemist and blogger, who is based in Boston, Massachusetts.

Chemists have already automated the process of making peptides (short-chain proteins made up of amino acid building blocks): a resin holds on to a growing peptide chain, and unreacted building blocks are simply washed away. But peptide synthesis is a much easier problem to solve: a limited range of amino-acid residues are connected together in a straight line. Burke’s varied building blocks can make complicated molecules that have branches and rings.

“The mechanical aspect of it isn’t the part that I’m most excited about,” says Lowe. For him, the leap to thinking of chemical synthesis as simply clipping together the same set of modular building blocks is conceptually more interesting.

“We synthetic organic types are so used to thinking of every complex molecule as a completely new landscape, a new mountain to climb,” he says.“I do think it's time that organic synthesis become a means to other ends, and for that to happen, a lot of it has to become routine.”

Bartosz Grzybowski, a chemist at the Ulsan National Institute of Science and Technology in South Korea, says that Burke’s system will be useful for drug discovery, in which large libraries of new molecules are screened for their disease-beating potential, “It would be great for pharma,” he says. Even though there are 200 commercially available MIDA boronates, Grzybowski wonders whether there will always be exactly the right kind of combination to make a particular molecule of interest.

Lowe says the building blocks cover quite a variety of possible molecules, but fall a long way short of covering everything a chemist might want to synthesize. "This is not going to be a 'make any organic compound' machine," he says. "But no-one's expecting such a thing. It can be a terrific way to make a defined series of compounds."

Burke’s machine won’t necessarily be coming to a chemistry lab near you anytime soon. Key technology for the automation is patented and exclusively licensed to a company, Revolution Medicines in Redwood City, California, that Burke co-founded. Revolution’s chief excutive, Mark Goldsmith, says that the next step will involve investing in developing the proof-of concept kit that Burke has created in his lab and seeing how it can help them with drug discovery. In future, Goldsmith says, the company might look to partnerships with other corporate partners.