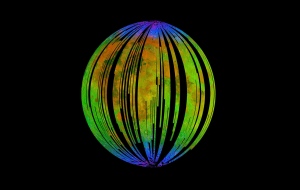 Analyses of rocks brought back by the Apollo programme show that the Moon's water (appearing in blue in this infrared lunar map) shares a common origin with water on Earth.

Measurements of the chemical composition of Moon rocks suggest that Earth was born with its water already present, rather than having the precious liquid delivered several hundred million years later by comets or asteroids. And in finding a common origin for the water on Earth and the Moon, the results highlight a puzzle over the leading theory for the formation of Earth's satellite.

Geochemist Alberto Saal of Brown University in Providence, Rhode Island, and his colleagues built on recent studies, including their own, that have revealed a substantial amount of water in the Moon’s interior. To find the source of the water, the team relied on a chemical fingerprint — the relative amounts of hydrogen and deuterium, a hydrogen isotope that has one extra neutron in its atomic nucleus.

In investigating primitive lunar samples carried to Earth by the Apollo 15 and 17 missions, the team found a deuterium-to-hydrogen ratio that matched the isotopic ratio in carbonaceous chondrites, which include some of the most primitive meteorites known. The ratio is also similar to that found in water on Earth. The findings “suggest a common source of water for both objects” and provide “a very important new constraint for models of Earth and Moon origin”, says planetary scientist Robin Canup of the Southwest Research Institute in Boulder, Colorado, who was not part of the study.

According to the leading theory of how the Moon formed, a Mars-sized body struck Earth some 4.5 billion years ago, generating a disk of debris that coalesced into the Moon. The simplest explanation for the latest findings, the team says, is that Earth already contained water before the collision. The water could not have been delivered after this because the Moon quickly built up a solid, impenetrable shell — the lithosphere — before meteorites could have delivered enough water to account for the supply in the lunar interior, the researchers argue. Their results are reported today in Science1.

That still leaves a potential gap in the Moon-forming model. Some planetary scientists had reasoned that the heat generated by the collision would have boiled away any water that Earth might have transferred to the coalescing Moon. The findings “are screaming that there’s something about the Moon's formation that we’re not quite grasping”, says study co-author Erik Hauri of the Carnegie Institution for Science in Washington DC.

Theorists have already suggested several ways out of the apparent dilemma. Moreover, the combination of Earth’s surface gravity and the rapid coalescing of the Moon, which occurred within only about 100 years, would have made it difficult for most of the water to vaporize, Canup contends.

Apart from focusing attention on the Moon’s formation, the isotopic match between Earth and lunar water and carbonaceous chondrites supports a startling theory about the evolution of the inner Solar System, Saal says. According to this theory2, known as the 'grand tack' model, the youthful planet Jupiter temporarely migrated into the inner Solar System, destabilizing the orbits of water-rich carbonaceous chondrites, which originally resided farther out than the birthplace of Jupiter and Saturn. As a result, some of the bodies could have fallen inwards and become part of the raw material for making Earth and its neighbours.

The isotopic measurements “add strong support” to the idea that those asteroids were the source of Earth's water, says Sean Raymond of the Astrophysical Laboratory in Bordeaux, France, a co-author of the grand tack model. The results also add credence to models of planet formation around other stars in which carbonaceous chondrites are the source of water, he adds.