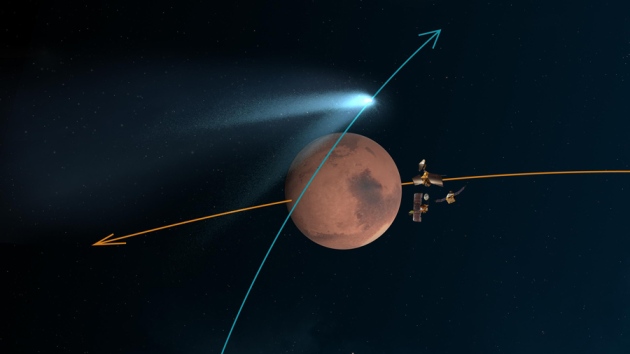 NASA's Mars orbiters lined up behind the red planet to avoid dust from the comet Siding Spring (C/2013 A1). (Spacecraft are not to scale.)

In a rare cosmic close encounter, the comet Siding Spring whizzed past Mars at a distance of 139,500 kilometres — just more than one-third of the distance from Earth to the Moon — on 19 October. Roughly 100 minutes later, the dust cloud spewed by the comet enveloped and then passed Mars, leaving the flotilla of Mars-orbiting spacecraft unharmed.

The comet now hurtles onward on its ultimate journey to swing past the Sun, whose gravitational influence has been drawing it closer from the outermost reaches of the Solar System. 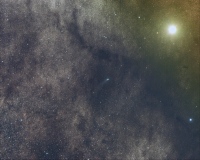 Images (such as this one) from amateur astronomers showed the fuzzy blob of Siding Spring approaching and then passing Mars’s bright glow. Images from orbiters at Mars are expected to trickle in over the coming days. They include NASA's Opportunity rover, which would have spotted the comet in the Martian dawn skies, and the Curiosity rover, whose prime observing window came at local dusk. “Most of the data will take a day or two to get through the pipeline,” says Carey Lisse, an astronomer at the Johns Hopkins University Applied Physics Laboratory in Laurel, Maryland.

After the comet’s passage, the general sense was of relief that the various Mars spacecraft had survived the cloud of dust whizzing off the comet at 56 kilometres per second. As a precaution, NASA's three Mars obiters were manoeuvered so as to be on the far side of the planet during the comet's fly-by, to shield them from cometary debris.

The three orbiters — the Mars Atmosphere and Volatile Evolution (MAVEN), the Mars Reconnaissance Orbiter (MRO) and the Mars Odyssey — all emerged unscathed. The MRO carries the highest-resolution camera ever flown to another planet. Its data will be downlinked over the coming days and could reveal the first ever glimpse of the heart of a pristine comet. Comet Siding Spring comes straight from the Oort cloud, the reservoir of icy bodies lying far beyond Pluto.

“We’ve never seen an Oort cloud comet nucleus before,” says Karl Battams, an astronomer at the US Naval Research Laboratory in Washington DC.

The European Space Agency has reported that its Mars Express spacecraft came through with no problems, and that images would be downlinked on Thursday. India's Mars Orbiter Mission announced on Monday morning via its Twitter account that it was in its orbit, 'safe and sound'.

The closest known comet to pass by Earth in historic times was Lexell’s comet, which came within 2.2 million kilometres in 1770. It has not been seen since. In 1994, comet Shoemaker-Levy 9 plunged into Jupiter, the first comet–planet collision ever witnessed.