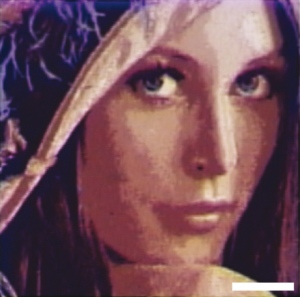 This is an enlargement of an image just 50x50 micrometres, printed at the highest definition possible.

The highest possible resolution images — about 100,000 dots per inch — have been achieved, and in full-colour, with a printing method that uses tiny pillars a few tens of nanometres tall. The method, described today in Nature Nanotechnology1, could be used to print tiny watermarks or secret messages for security purposes, and to make high-density data-storage discs.

Each pixel in these ultra-resolution images is made up of four nanoscale posts capped with silver and gold nanodisks. By varying the diameters of the structures (which are tens of nanometres) and the spaces between them, it’s possible to control what colour of light they reflect. Researchers at the Agency for Science, Technology and Research (A*STAR) in Singapore used this effect, called structural colour, to come up with a full palette of colours. As a proof of principle, they printed a 50×50-micrometre version of the ‘Lena’ test image, a richly coloured portrait of a woman that is commonly used as a printing standard.

Joel Yang, a materials scientist A*STAR, who led the study, first noticed the effect when looking at metal nanoparticles under a light microscope. “We saw that we could control the colours, from red to blue, by controlling the size of the particles,” he says. Depending on its size, a metal nanostructure resonates with a particular wavelength of light — much like a guitar string resonates at a particular frequency depending on its length. Light at the right wavelength causes electrons on the surface of the metal nanostructure to resonate, and this determines the colour the structure reflects. This effect, called plasmon resonance, is well known to physicists. Yang is the first to come up with a way to take advantage of it to print high-resolution, full-colour images, says Jay Guo, an engineer at the University of Michigan in Ann Arbor, who was not involved with the work.

For the initial demonstration of the Lena image, the researchers first used electron-beam lithography to pattern a silicon wafer with an array of posts made from an insulating material. Then, they deposited metal nanodisks on the posts and coated the wafer’s surface with metal. The metal coating on the wafer reflects the coloured light from the pillars, making the image bright. “The colours appeared all at once after we applied the metal,” says Yang.

Yang’s structured-colour images have a resolution of about 100,000 dots per inch. By comparison, inkjet and laser printers produce ink spots that are micrometres in size, and their resolution tops out at around 10,000 dots per inch. If Yang’s images were made over areas large enough to see with the naked eye, “they would look higher than high definition”, says Teri Odom, a chemist at Northwestern University in Evanston, Illinois. But, she notes, people with perfect vision can’t discern objects smaller than 20–30 micrometres.

Even under the best microscope, optical images have an ultimate resolution limit, and this method hits it. When two objects are too close together, light reflecting off them will diffract, and the two objects blur together. This effect, called the diffraction limit, sets in when the distance between two objects is equal to half the wavelength of the light used for imaging. The wavelength in the middle of the colour spectrum is about 500 nanometres. That means the pixels in a printed image can’t be spaced any closer together than about 250 nanometres without looking smudged. Yang’s images pack the pixels at just this distance.

In addition to resolution, another advantage to structural colour is image stability. The metal and insulating materials used to make these images are durable. “They do not fade over time, unlike organic dyes and colourants,” says Guo.

Yang says that he is now working on a stamping method to print the pillars more easily over larger areas, and onto different materials. The electron-beam carving method used for the initial demonstration is too slow to use over large areas.

The researchers have applied for a patent for the printing method, and hope to commercialize the microimages as nanoscale watermarks, or for cryptography. The method for printing coloured spots very close together could also be used to encode ultra-dense optical data to disks similar to DVDs. Because these images cannot be rewritten, they would be most useful for storing archival information.