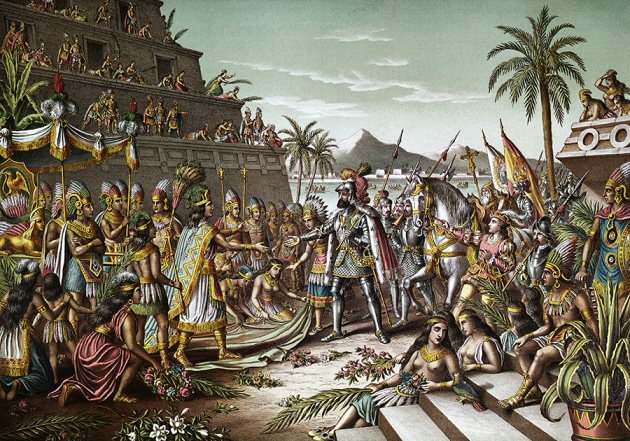 The Spanish invasion of Mexico, depicted in a nineteenth-century illustration, was followed by a series of epidemics of unknown cause.

One of the worst epidemics in human history, a sixteenth-century pestilence that devastated Mexico’s native population, may have been caused by a deadly form of salmonella from Europe, a pair of studies suggest.

In one study, researchers say they have recovered DNA of the stomach bacterium from burials in Mexico linked to a 1540s epidemic that killed up to 80% of the country's native inhabitants. The team reports its findings in a preprint posted on the bioRxiv server on 8 February1.

This is potentially the first genetic evidence of the pathogen that caused the massive decline in native populations after European colonization, says Hannes Schroeder, an ancient-DNA researcher at the Natural History Museum of Denmark in Copenhagen who was not involved in the work. “It’s a super-cool study.”

In 1519, when forces led by Spanish conquistador Hernando Cortés arrived in Mexico, the native population was estimated at about 25 million. A century later, after a Spanish victory and a series of epidemics, numbers had plunged to around 1 million.

The largest of these disease outbreaks were known as cocoliztli (from the word for ‘pestilence’ in Nahuatl, the Aztec language). Two major cocoliztli, beginning in 1545 and 1576, killed an estimated 7 million to 18 million people living in Mexico’s highland regions.

“In the cities and large towns, big ditches were dug, and from morning to sunset the priests did nothing else but carry the dead bodies and throw them into the ditches,” noted a Franciscan historian who witnessed the 1576 outbreak.

There has been little consensus on the cause of cocoliztli — although measles, smallpox and typhus have all been mooted. In 2002, researchers at the National Autonomous University of Mexico (UNAM) in Mexico City proposed that a viral haemorrhagic fever, exacerbated by a catastrophic drought, was behind the carnage2. They compared the magnitude of the 1545 outbreak to that of the Black Death in fourteenth-century Europe.

In an attempt to settle the question, a team led by evolutionary geneticist Johannes Krause at the Max Planck Institute for the Science of Human History in Jena, Germany, extracted and sequenced DNA from the teeth of 29 people buried in the Oaxacan highlands of southern Mexico. All but five were linked to a cocoliztli that researchers think ran from 1545 to 1550.

Ancient bacterial DNA recovered from several of the people matched that of Salmonella, based on comparisons with a database of more than 2,700 modern bacterial genomes.

Further sequencing of short, damaged DNA fragments from the remains allowed the team to reconstruct two genomes of a Salmonella enterica strain known as Paratyphi C. Today, this bacterium causes enteric fever, a typhus-like illness, that occurs mostly in developing countries. If left untreated, it kills 10–15% of infected people.

It’s perfectly reasonable that the bacterium could have caused this epidemic, says Schroeder. “They make a really good case.” But María Ávila-Arcos, an evolutionary geneticist at UNAM, isn't convinced. She notes that some people suggest that a virus caused the cocoliztli, and that wouldn't have been picked up by the team’s method.

The question of origin

Krause and his colleagues’ proposal is helped by another study posted on bioRxiv last week, which raises the possibility that Salmonella Paratyphi C arrived in Mexico from Europe3.

A team led by Mark Achtman, a microbiologist at the University of Warwick in Coventry, UK, collected and sequenced the genome of the bacterial strain from the remains of a young woman buried around 1200 in a cemetery in Trondheim, Norway. It is the earliest evidence for the now-rare Salmonella strain, and proof that it was circulating in Europe, according to the study. (Both teams declined to comment on their research because their papers have been submitted to a peer-reviewed journal.)

“Really, what we’d like to do is look at both strains together,” says Hendrik Poinar, an evolutionary biologist at McMaster University in Hamilton, Canada. And if more ancient genomes can be collected from Europe and the Americas, it should be possible to find out more conclusively whether deadly pathogens such as Salmonella arrived in the New World from Europe.

The existence of Salmonella Paratyphi C in Norway 300 years before it appeared in Mexico doesn’t prove that Europeans spread enteric fever to native Mexicans, says Schroeder, but that hypothesis is reasonable. A small percentage of people infected with Salmonella Paratyphi C carry the bacterium without falling ill, so apparently healthy Spaniards could have infected Mexicans who lacked natural resistance.

Paratyphi C is transmitted through faecal material, and a collapse of social order during the Spanish conquest might have led to the poor sanitary conditions that are ripe for Salmonella spread, Krause and his team note in the paper.

Krause’s study offers a blueprint for identifying the pathogens behind ancient outbreaks, says Schroeder. His own team plans to look for ancient pathogens in Caribbean burial sites that seem to be linked to catastrophic outbreaks, and that were established after the Europeans arrived. “The idea that some of them might have been caused by Salmonella is now a distinct possibility,” he says.