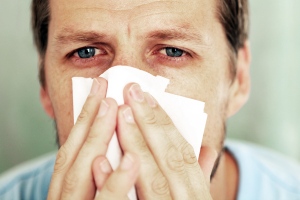 Colds are caused by viruses that spread easily in low temperatures.

Scientists have finally confirmed what parents have warned for centuries — that catching a chill can bring on the sniffles.

A team from Yale University in New Haven, Connecticut, found that low temperatures dampen natural defences against rhinoviruses, the leading causes of seasonal colds, in mice and in human airway cells. “What we show here is a temperature-dependent interaction between the host and the virus,” says team leader Ellen Foxman, who presented the data on 19 May at a conference of the American Society for Microbiology.

Colds are most common in winter, and researchers have known for decades that many rhinoviruses thrive in low temperatures: they replicate better in the upper respiratory tract than in the warmer environment of the lungs. But efforts to link the viruses’ apparent temperature preference to seasonal fluctuations in the incidence of colds have produced mixed results.

In 2005, for example, researchers at Cardiff University, UK, dunked healthy people’s feet into icy water to show that exposure to cold could cause an upper-respiratory infection1. But they could not explain why that was the case. Other studies have found no connection between temperature and rates of infection2.

In an attempt to solve the cold conundrum, Foxman and her colleagues studied mice susceptible to a mouse-specific rhinovirus. They discovered that at warmer temperatures, animals infected with the rhinovirus produced a burst of antiviral immune signals, which activated natural defenses that fought off the virus. But at cooler temperatures, the mice produced fewer antiviral signals and the infection could persist.

The researchers then grew human airway cells in the lab under both cold and warm conditions and infected them with a different rhinovirus that thrives in people. They found that warm infected cells were more likely than cold ones to undergo programmed cell death — cell suicide brought on by immune responses aimed at limiting the spread of infections.

Foxman says that the data suggest that these temperature-dependent immune reactions help to explain rhinoviruses' success at lower temperatures, and explain why winter is the season for colds. As temperatures drop outside, humans breathe in colder air that chills their upper airways just enough to allow rhinoviruses to flourish, she says.

Marc Lecuit, an infectious-disease researcher at the Pasteur Institute in Paris, says that the finding is interesting for both basic immunology and personal health. Rhinoviruses are common, he says, and “all of us have been infected”.

But others caution that there are still many unknowns about how cold could help to spread the viruses. Virologist Vincent Racaniello of Columbia University in New York says that temperature is probably just one of several factors that explain how rhinoviruses spread. “Simple answers like this are never the whole story,” he says.